Competition list: CEC approved the procedure for placing parties on the ballot in the elections to the State Duma

The CEC approved the procedure for placing parties on the ballot for the upcoming elections to the State Duma. The first three issues in the bulletin are occupied by the Communist Party, the Green Party and the Liberal Democratic Party. In fourth place is the New People party, followed by United Russia. Ella Pamfilova, chair of the CEC, noted that many political forces attach great importance to the place they occupy in the ballot. At the same time, she noted that the voting result depends directly on the work carried out by the party. 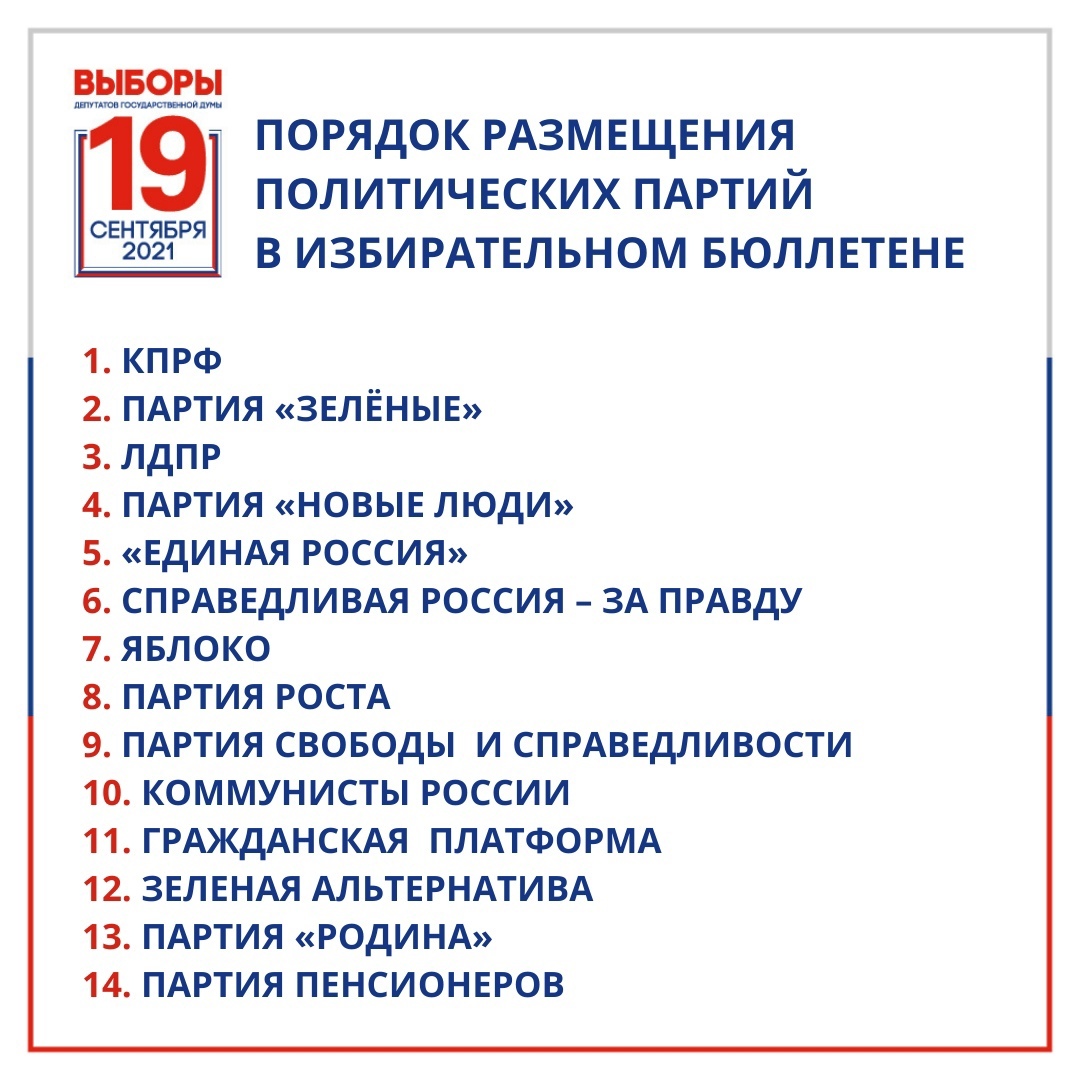 The Central Election Commission (CEC) of Russia has approved the procedure for placing the names and emblems of political parties in the ballot paper for voting in the federal and single-mandate constituencies in the upcoming elections to the State Duma.

“Many parties, of course, attach great importance to the place they will get on the ballot.

Although, in our opinion, the voting results depend on the work that each party, each candidate carries out both in the inter-election period and during the election campaign, ”TASS quoted CEC Chairwoman Ella Pamfilova.

The first three issues in the bulletin are occupied by the Communist Party, the Green Party and the Liberal Democratic Party.

The sixth issue in the bulletin will receive "A Just Russia - Patriots - For Truth", the seventh - the party "Yabloko".

Next in order are the Party of Growth, the Russian Party of Freedom and Justice, and the "Communists of Russia".

The parties "Civic Platform", "Green Alternative", "Rodina" and the Party of Pensioners were numbered from 10 to 14 in the bulletin.

Earlier, the CEC approved the form of ballots for voting in the federal and single-mandate constituencies in the upcoming elections.

Thus, the ballot will indicate the name of the political party that registered the federal list of candidates;

the number of the corresponding regional group of candidates (if any).

In addition, if the candidate had or has a criminal record, information about it is indicated in the ballot.

Earlier, the deputy head of the CEC of Russia Nikolai Bulaev said that the financing of the election campaign in the framework of the elections to the State Duma from the federal budget amounted to 21.4 billion rubles.

On August 0, it became known that, following the meeting, the CEC adopted a resolution on the additional allocation of more than 102 million rubles to regional election commissions for organizing elections.

According to the document, eight regional election commissions will receive over 102.2 million rubles in connection with the use of air transport in remote and hard-to-reach areas.

Recall that voting in the Duma elections will take place over three days - from 17 to 19 September.

As the head of the CEC Ella Pamfilova said, more than 3 thousand candidates were registered in the elections of deputies of the State Duma on federal party lists and almost 1.5 thousand people in single-mandate constituencies.

Speaking in early August, the head of the CEC added that at that time 26 out of 30 political parties "actually participate in the electoral race at all levels of elections."

According to Pamfilova, video surveillance of the elections will be carried out for three days.

There will be more than 50 thousand objects with video surveillance with online broadcast on the service portal, the head of the CEC said.

Also on russian.rt.com "Double standards in approaches": Russia reacted to the OSCE's refusal to observe the elections to the State Duma

Observers from the OSCE

In early August, it also became known that the Organization for Security and Cooperation in Europe (OSCE) informed about its refusal to participate in observing the elections to the State Duma of the Russian Federation, since Moscow limited the number of representatives of the structure against the background of the epidemiological situation.

The Russian Foreign Ministry said they were disappointed with this decision.

Oleg Gavrilov, deputy director of the information and press department of the Russian Foreign Ministry, said that the Russian side did not receive an explanation why the parameters that "already led to successful monitoring results in the realities of other states" were not applicable to the Russian Federation.

"All this strongly resembles ... logic in the spirit of" either our way or not. "

And this, of course, does not heal the dialogue with the OSCE Office (for Democratic Institutions and Human Rights (ODIHR) -

), but rather complicates it, ”Gavrilov said.

At the same time, according to Gavrilov, the absence of ODIHR observers will not affect the quality of the observation process, including because "the Bureau's quota, if it persists in its unwillingness to come to Russia, will certainly be happy to choose" other monitoring structures.

The representative of the Russian Foreign Ministry also proposed to develop uniform, transparent and understandable criteria and methodologies for monitoring the expression of the will of citizens in any OSCE state, which can be adapted to the realities of the pandemic.

Gavrilov stressed that the Russian Foreign Ministry is ready for such work.