Crisis in the Gulf of Oman: 4 oil tankers have lost control, hijacking is feared 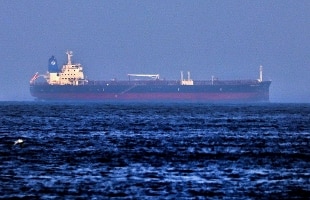 03 August 2021 Four oil tankers have warned that they have lost control in the Gulf of Oman. The Times of Israel reports it. In addition to the Asphalt Princess, whose crew was allegedly kidnapped by gunmen, and the Golden Brilliant, which allegedly hit a mine, problems were also reported by the Indian Jag Puja and the Vietnamese Abyss. It is not yet known whether, in these last two cases, it is something more serious than simple avian.

Armed group boarded ship off the coast of the Emirates

A group of eight or nine armed individuals allegedly boarded the Panamanian-flagged ship Asphalt Princess in the Gulf of Oman off the coast of the United Arab Emirates.

Iran is on trial for suspected hijacking of the oil tanker Asphalt Princess off the coast of Fujairah in the Gulf of Oman. The Times reported on Twitter, reporting that "British sources believe that the Asphalt Princess has been hijacked" and that the security forces "are working on the assumption that the Iranian military or delegates have boarded the ship" .

Russian sources also say that the crew of the Asphalt Princess were taken hostage by gunmen who took control of the tanker.

Israel: "Against Iran we are able to act alone"

Israel has asked for the support of the allies in the fight against Iran, but is able to act alone. This was stated by the Israeli Prime Minister, Naftali Bennett, visiting the troops deployed on the northern border of the Jewish state.

"We are working to bring the world together, but at the same time we also know how to act alone," Bennett said of the maritime incidents attributed to Iran in the Persian Gulf, according to Asharq al-Awsat. "Iran already knows the price we charge when someone threatens our security," added Bennett, "Iranians must understand that it is impossible to sit quietly in Tehran and set the entire Middle East on fire from there. It's over." .

Iran: "News of incidents in the Gulf suspected "

The Iranian Foreign Ministry has called "suspicious" the news of accidents that occurred today to several ships sailing off the United Arab Emirates, warning against the attempt to create "a false climate for specific political purposes" against Tehran.

"Reports of several ship security incidents in the Persian Gulf and the Gulf of Oman are absolutely suspicious," spokesman Saeed Khatibzadeh said in a statement released by the ministry, warning against "any attempt to create a false climate for specific political purposes. ". Iran has been accused by Israel, the United States and the United Kingdom of attacking an Israeli ship in the same area last Friday. Attack that killed two people.