Sport fishing has exploded during the pandemic

More and more people are trying their luck at fishing since the pandemic hit, new statistics show. To protect endangered stocks, the method of releasing fish into the water has become increasingly common. But catch and release fishing can kill fish if you make a mistake. 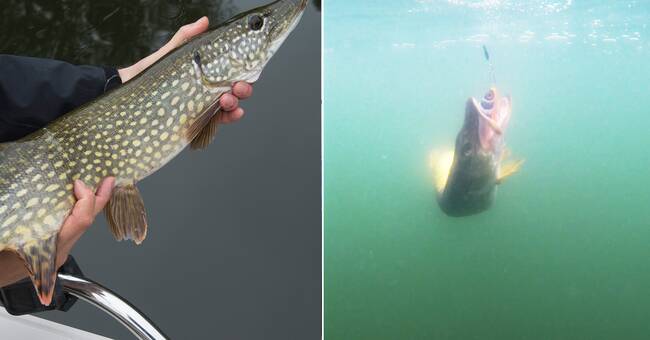 During the pandemic, sport fishing has broken new records.

Since March 2020, the number of digital fishing licenses at iFiske, which is the largest in Sweden, has increased by 80 percent according to founder Kjell Ideskär.

The Swedish Sport Fishing and Fisheries Conservation Association sees the same trend in the increased number of fishing licenses sold and the influx of members, and the increase will continue this spring according to communications manager Andreas Ollinen.

At the same time, some Swedish fish stocks are under pressure.

For example, both pike and perch have declined in recent years in the Baltic Sea.

Today, you can catch a maximum of three pike per day in the Baltic Sea as an angler.

But if you release pike you manage to hook, there are no restrictions.

Therefore, the method of so-called catch and release fishing has become popular.

Seven out of ten fish are thrown back into the sea

When the fish has been caught, the hook is released from the mouth and then the fish is sometimes taken up in the boat to be photographed as a trophy, before it is allowed to swim away to be able to reproduce and be caught again.

Release fishing has increased from near zero in the late 1980s to now 70 percent being released back into the sea instead of being picked up as food fish, shows an unpublished study by Petter Tibblin at Linnaeus University who researches catch and release fishing.

- In general, it usually works quite well and it is an important management tool, because the alternative is to kill all fish or not fish at all, Petter Tibblin believes.

Other researchers are more critical of the method.

- When you catch fish for food, the benefit to humans can outweigh the fish's suffering, but there are a lot of studies that show that a fairly high mortality rate after catch and release, says Lynne Sneddon who is a fish physiologist at the University of Gothenburg.

Depending on the species and time of year, the mortality rate for fish released after catch and release can range from a few percent up to over 30 percent.

However, researchers disagree whether fish suffer the same pain as mammals.

Putting hooks on animals on land, hauling them in, photographing them and then releasing them is an unreasonable thought for most people.

But wild-caught fish are not covered by animal welfare laws or hunting legislation.

- We play with another creature just because we think it's fun.

If you lift the fish, then you always have the risk of damaging the skin and mucous membranes.

Plus you get up in the air where the gills no longer work, says Svante Winberg who is a professor of physiology at Uppsala University.

See more in The World of Science about the Pisces universe on Monday 17 May at 20.00 on SVT2 and svtplay.