The employee stated that he did not offend the company but only shared, on his personal profile, a post that invited you to see the fiction that tells of a polluting steel mill and a sick child 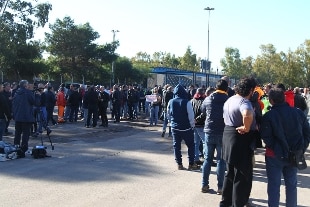 April 14, 2021 From 7 this morning, the strike called by the USB union to protest against the dismissal, which took place in recent days by the company, of the employee Riccardo Cristello, cost control technician, started in ArcelorMittal, the iron and steel factory of Taranto.

A garrison is also underway in front of the plant management, present the same Cristello.

After a 5-day suspension from work with a ban on access to the plant, he was fired by ArcelorMittal.

The company found a post that the same worker put on his social wall about the fiction of Canale 5 'Wake up my love' offensive and disparaging towards the company and its managers.

The employee, on the other hand, stated that he had not offended the company but had only shared, on his personal profile, a post that invited you to see the fiction that tells of a polluting steel mill and a sick child.

This history has many similarities with the Taranto case even if in the fiction there are no references to either Taranto or ArcelorMittal.

Cristello's dismissal was confirmed yesterday by ArcelorMittal to the unions.

However, the company has expressed "its willingness to have a comparison similar to the one it had recently with another employee", for which, "in response to the presentation of an adequate apology", it was decided to revoke the dismissal.

In fact, another employee of the Taranto ironworks had also put a similar post on his social bulletin board.

But he then publicly apologized to the company and there were no other disciplinary measures for him after the 5-day suspension.

Tomorrow the Usb will go to Rome for a sit-in under the Ministry of Labor, again on the Cristello case, which Minister Andrea Orlando has already involved in. On April 23, however, the trade unions Fim Cisl, Fiom Cgil and Uilm to demonstrate under the Mise for a series of problems concerning ArcelorMittal.

The actress Sabrina Ferilli, the main protagonist of the fiction, expressed support for the dismissed, and she called Cristello declaring herself willing to pay him a month's salary and the legal costs related to the appeal of the dismissal.

Support for Cristello also from the actor Michele Riondino, as well as from Simona Izzo and Ricky Tognazzi, directors of the fiction.

Finally, on the ArcelorMittal corporate level, the release of the Mef decree is expected today, which assigns to Invitalia the 400 million necessary to carry out the operation on the capital of ArcelorMittal with the entry of the State which will thus acquire 50 percent of control of the company and will express the chairman of the board.

On the specific point, union sources, however, specify to Agi that "between various obligations and passages with Invitalia, three more weeks will pass before taking action".