Study: The efficacy of the Moderna vaccine remains strong 6 months after vaccination

A new study published in the "New England Journal of Medicine" showed that the two-dose Corona virus vaccine developed by Moderna continues to produce antibodies six months after vaccination, while the European Medicines Agency recommended the use of the AstraZeneca vaccine without evaluation. 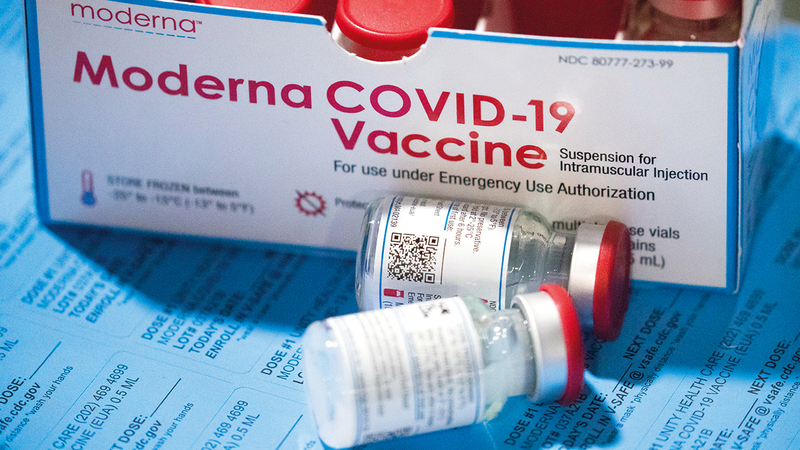 Study: The efficacy of the Moderna vaccine remains strong 6 months after vaccination

Wales became the first country in the United Kingdom to start using the Corona vaccine developed by Moderna.

A new study published in the "New England Journal of Medicine" showed that the two-dose Corona virus vaccine developed by Moderna continues to produce antibodies six months after vaccination, while the European Medicines Agency recommended that AstraZeneca vaccine be used without restriction.

In detail, a study showed that the effectiveness of the Moderna vaccine remains strong six months after vaccination, and the "New York Daily News" reported that the study is continuing to find out the extent of the period during which antibodies are monitored in people who received the vaccine.

The researchers aim to continue monitoring people in the trial to determine when protection ends and how much additional protection can be obtained with boosters.

According to the New York Daily News, the study concluded that the vaccine developed by Pfizer remains 92% effective after six months of vaccination, in a separate trial.

An exact number for the Moderna vaccine was not provided.

Both vaccines showed their high effectiveness in preventing severe disease due to infection with the virus.

The news about the effectiveness of vaccines comes as the United States continues to expand the range of people eligible to receive vaccines, as a fourth wave of the epidemic threatens to sweep the United States.

President Joe Biden announced yesterday that it will advance the date of making vaccines available to all adults nationwide by two weeks, to start on April 19.

According to data from the Centers for Disease Control and Prevention, more than 108 million people, or nearly 33% of the population, received at least one dose of any of the approved vaccines, and more than 63 million people were fully vaccinated as of yesterday.

And Ellie Taylor, a caregiver, also became the first British woman to receive the Moderna vaccine, when she got vaccinated at West Wales General Hospital in Carmartine yesterday.

The vaccine, in which vaccination requires two doses, was approved by the British regulatory authority, the Medicines and Healthcare Products Regulatory Agency, on January 8, making it the third coronavirus vaccine authorized for use after the Pfizer-Biontech and AstraZeneca vaccines. / Oxford.

About 5,000 doses were sent to vaccination centers, the day before yesterday.

The vaccine is important to Wales because its ability to be stored for a long time and transport easily will make it easier to vaccinate people who live in remote areas there.

The Minister of Health in Wales, Vaughan Getting, described the vaccine as "another major milestone" in Wales' battle against the Corona virus.

This comes at a time when the European Medicines Agency recommended, the day before yesterday, the use of the AstraZeneca vaccine against Corona virus without restriction, indicating that the benefits of the vaccine exceed its risks.

In doing so, the Agency continues to adhere to its evaluation of the vaccine.

Experts found a relationship between the vaccine and clotting of an extremely small number of platelets, and said this is rare.

The experts had conducted a comprehensive search for reports of blood clots occurring after vaccination.

The agency stated that these efforts will continue.

It is still not clear what the implications of the agency’s decision will have regarding vaccines, as many European Union countries have decided to restrict the use of the vaccine produced by the British-Swedish company and limit it to people over the age of 60 years.

The majority of the injuries appeared about two weeks after the vaccination, and the experts did not conclude about risk factors, especially such as age or gender.

The agency advised those who received the vaccination to pay attention to the remote possibility of very rare cases of thrombosis, and said that if symptoms appear, they should seek the advice of a doctor immediately.

The agency advised those vaccinated to be aware of the remote possibility of extremely rare thrombosis.

• The study concludes that the Pfizer vaccine remains 92% effective after 6 months of vaccination.

• Moderna and Pfizer vaccines have shown their high effectiveness in preventing severe disease due to infection with the virus.