400 meters long: This is why Hapag-Lloyd is now ordering giant ships

Germany's leading shipping company orders six freighters with 23,500 container units each, which are among the largest in the world - and is revising its previous strategy. 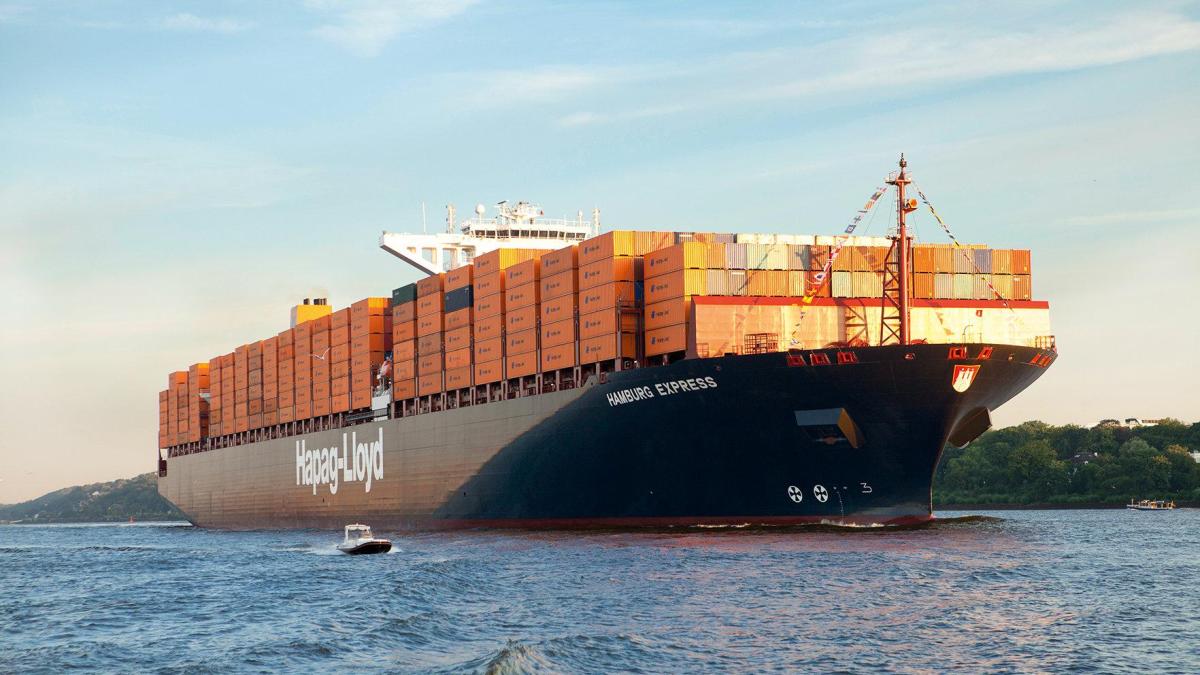 Hapag-Lloyd changes its long-term strategy and orders six large container ships with a capacity of 23,500 container units (TEU) each.

They are among the largest container freighters in the world.

Germany’s leading shipping company, based on Ballindamm in Hamburg, is the first to order ships with more than 20,000 TEU.

The ships are built at the Daewoo shipyard in South Korea, they are equipped for so-called dual-fuel operation - optionally with ship diesel or refrigerated, liquefied natural gas (LNG).

The ships are scheduled for delivery between April and December 2023.

Ships of this size are 400 meters long and more than 60 meters wide.

The total investment of around one billion dollars (820 million euros) is one of the largest in the history of the world's fifth largest shipping company.

"By investing in six ultra-large container ships, we are reducing the costs per container transported on the routes between Europe and the Far East, we are improving our competitiveness and are taking a significant step towards modernizing our fleet," said Hapag-Lloyd boss Rolf Habben Jansen on Wednesday.

"We also reduce the environmental impact we cause."

The largest ships in Hapag-Lloyd's fleet to date, such as the “Barzan”, each have a capacity of just under 20,000 TEU.

Hapag-Lloyd took over these ships as part of a merger with the Arab shipping company UASC and integrated them into its fleet.

The largest ships that Hapag-Lloyd has had itself built to date - such as the "Hamburg Express" - have a capacity of around 13,200 TEU.

Habben Jansen had always denied the economic sense of ships over 20,000 TEU.

The cost reductions for the transport per container between ships with 14,000 TEU and those with around 18,000 TEU are considerable, he argued.

In addition, there would hardly be any useful effects.

Now the shipping company has rethought.

According to WELT information, one of the main reasons for this is that business on the routes between Europe and the Far East is now concentrated on the three shipping alliances 2M, Ocean Alliance and The Alliance.

Hapag-Lloyd is part of The Alliance.

In this group, Hyundai Merchant Marine (HMM) already operates ships in the largest category with a capacity between 23,000 and 24,000 TEU.

With its new ships, Hapag-Lloyd wants to optimize shared services.

In turn, the French shipping company CMA CGM - the world's third largest shipping company and part of Ocean Alliance - put the first of its nine ships with a capacity of 23,000 TEU each into operation this year, the type ship “CMA CGM Jacques Saadé”.

The freighters in this series are powered exclusively by LNG.

The MSC shipping company, based in Switzerland, operates ships with a capacity of almost 24,000 TEU.

Together with the world market leader Maersk from Denmark, MSC forms the 2M alliance.

The shipping industry, which was in crisis for years, has now stabilized - especially because there is now more self-discipline when ordering new ships than in the period immediately after the global financial market crisis.

"In the past ten years, the shipping industry has found a much more rational view of things," said Maximilian Rothkopf, director of day-to-day business at Hapag-Lloyd, recently told WELT.

"The time of extreme volatility in supply and demand is over, also because shipping companies and alliances are no longer constantly fighting for market share with new ships and creating overcapacities with more and more newly built ships."

On the lines between Europe and the Far East, the transport prices for the containers, the so-called freight rates, have recently risen significantly despite the corona pandemic.

This also applies to the routes between Asia and the USA.

One reason for this is that the shipping lines carry a lot of consumer goods even during the pandemic.

Large container ships, such as the ones Hapag-Lloyd has now ordered, need a very high degree of utilization for economic operation, which is around 90 percent of the nominal transport capacity.

Otherwise the enormous operating costs of such ships cannot be covered.