Gargash: The UAE has taken effective steps to confront "Covid-19"

The Minister of State for Foreign Affairs, Dr. Anwar bin Muhammad Gargash, confirmed that the UAE's wise leadership has taken effective steps to confront the Coronavirus (Covid-19), to protect public health, while at the same time mitigating the negative effects of the pandemic on the economy, adding that the UAE participated actively 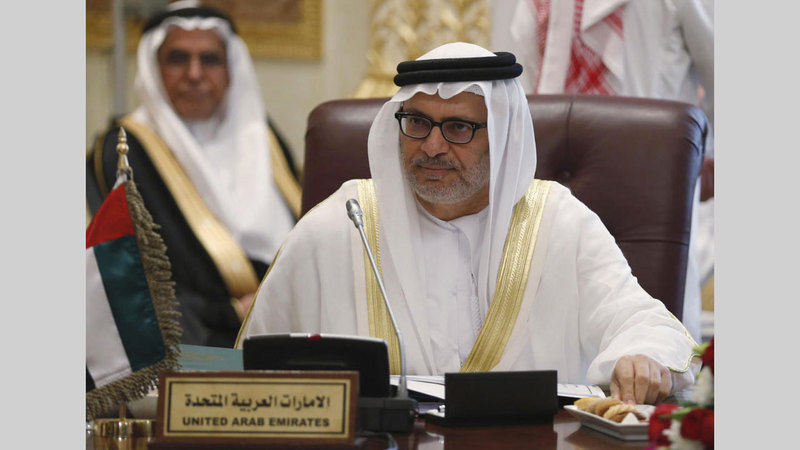 Gargash: The UAE has taken effective steps to confront "Covid-19"

Gargash affirmed that the UAE adheres to its commitment to pluralism, combating extremism, respecting national sovereignty and the peaceful resolution of disputes.

The Minister of State for Foreign Affairs, Dr. Anwar bin Muhammad Gargash, confirmed that the UAE's wise leadership has taken effective steps to confront the Corona epidemic (Covid-19), to protect public health, and at the same time mitigate the negative effects of the pandemic on the economy.

He added that the UAE actively participated in the international efforts in this crisis, and provided urgent medical aid to 118 countries, benefiting more than 1.5 million people working on the front lines to confront the epidemic, stressing that the UAE has never considered political considerations when providing its humanitarian aid. From this standpoint, she did not hesitate to extend aid to Iran when it needed it.

In his keynote speech at the Seventh Abu Dhabi Strategic Forum, which is organized by the Emirates Policy Center virtually, Gargash said that the UAE, with the approaching 50th anniversary of its founding, continues to innovate, open new horizons and prepare for the future, as the most important technological and political developments that the Arab world has witnessed during this The year was her share, starting with the launch of the "Probe of Hope" on its journey to Mars, passing through the operation of a peaceful nuclear power plant, and ending with the Abrahamic peace agreement with the State of Israel.

With regard to international affairs, he affirmed that the UAE is committed to its commitment to pluralism, combating extremism, respecting national sovereignty, peaceful resolution of disputes, good governance and sustainable development, adding that the country, as a candidate for non-permanent membership in the UN Security Council during the period from 2022 to 2023, intends to exploit these The opportunity to contribute to strengthening confidence in the multilateral system, and to use a disciplined approach rooted in the United Nations Charter.

Regarding regional affairs, he said that Iran and Turkey have increased the use of external intervention as a tool to achieve their expansion projects in the region, while Iran continues to support militias to destabilize various Arab countries and continue the flow of its weapons to Yemen, Turkey is supporting armed Islamic groups in Libya and increasing the danger. Extreme militias and mercenaries exploit the security vacuum that exists in the country.

Gargash stressed that the UAE cannot accept Iranian and Turkish destabilizing policies, but it also does not seek confrontation, and that the UAE always works with its friends and allies to encourage constructive dialogue and positive diplomacy.

He stressed that the UAE is committed to seeking a peaceful solution to the crises, and that it will continue to support the Arab coalition in Yemen, and will seek a comprehensive ceasefire, which paves the way towards a lasting political solution.

Regarding the Libyan issue, Gargash stated that the UAE welcomed the permanent ceasefire agreement and the launch of political dialogue between the Libyan parties, and it supports the efforts of the UN mission in Libya.

He added that the UAE looks with great concern at the heinous acts of violence that some European cities have witnessed recently, stressing that the extremist transnational movements do not represent Islam in any way, and in this regard he called for the need to distinguish between the use of Islam as a political tool and Islam as a global religion.

He said that the Abrahamic peace agreement with Israel was a sovereign and national decision, and was not directed against any other country, and it is a decision that promotes tolerance, openness and a desire to reduce polarization in the region, and it was based on a sincere desire to achieve a strategic transformation, a practical vision, and it required a lot of courage from Our leadership is because maintaining the status quo is no longer the best option.

He added that the agreement does not in any way diminish the UAE’s interest in the Palestinian cause, and its support for the Palestinian people, pointing out that the UAE believes that a comprehensive and just peace must be achieved, but it also realizes that the Palestinians and the Israelis are the ones who must decide to proceed with this peace, and that a state The UAE is ready to support him in any way.

He congratulated the US President-elect, Joe Biden, on winning the recent elections, adding that the UAE is looking forward to cooperating with him to deepen relations between the two countries, a relationship based on friendship, interests and common values, and transcends various parties and administrations, adding that interaction with the United States and its leadership remains an indispensable matter. In the Middle East, and that the Abrahamic Peace Agreement reflects the consensus of the Democratic and Republican parties in America, to support this agreement that the Trump administration facilitated its achievement, and that President-elect Joe Biden also supported it.

In turn, Dr. Ibtisam Al-Ketbi, head of the Emirates Policy Center, said in the opening speech of the forum: “The year 2020 unveiled new fault lines and clashes, and at the same time unveiled new global and regional potentials,” adding that the “Covid-19” pandemic, The US presidential elections, and the signing of the Brahimi Peace Agreement, are all factors that have created new dynamics that will have a decisive role in determining the contours of the global and regional future.

She added that the Abrahamic Peace Agreement, which the UAE concluded with Israel, affirmed that flexibility and vitality are important elements in responding to challenges, and that overcoming these challenges and finding solutions to the entrenched conflicts in the countries of the Middle East require a creative vision and political and moral courage that works to build peace, stability and prosperity. And hope for the people of the region.

• “The Abrahamic peace agreement with Israel was a national sovereign decision, and it was not directed against any other country.”

• Iran and Turkey have increased the use of external interference as a tool to achieve their expansion projects.