Ewan burns Bennett and Nizzolo at the Sisteron finish line

The Australian comes out at the last in a sprint with compact ranks. Fourth victory for him in the yellow race. Long-range escape of the Frenchman Cousin, reached 15 kilometers from the finish. Alaphilippe always leader 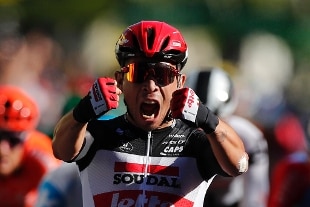 31 August 2020With a serpentine in the last meters, Caleb Ewan wins the sprint that closes the third stage of the Tour de France.

, burning Irishman Sam Bennett, who came out too early in a windy arrival.

Nothing changes in the general classification: the French Julian Alaphilippe remains in the yellow jersey, after having conquered it in the second stage.

At 4 ”the British Adam Yates, at 7” the Swiss Marc Hirschi;

at 17 ”the best, including the winner of the 2019 Tour, the Colombian Egan Bernal, and his main competitor, the Slovenian Primož Roglic.

Third stage characterized by the escape of four men at the start: the French Jérôme Cousin, Anthony Perez and Benoît Cosnefroy, and the Belgian Oliver Naesen who soon gave up.

At kilometer 71 Perez and Cosnefroy let themselves be reabsorbed by the group, after having collected points for the climbers classification.

Cousin remains alone and is reabsorbed when there are 15 km left to finish, after having also had an advantage of 2'40 ”.

6 km from the finish there was a fall at a traffic island;

The fourth stage presents the first uphill finish of the Tour, with the finish at 1,825 meters at Orcière-Merlette, a first-class ascent.

Along the 160.5 km there are three other third and one fourth category GPMs.