The Xinjiang Uygur Autonomous Region Changji Hui Autonomous Prefecture Health and Health Commission has implemented the problem of reducing the burden of grassroots deployment and increasing the burden on the grassroots level. The State Health and Welfare Commission did not attach importance to and did not study the policy of reducing burdens at the grassroots level, and did not establish a system for document approval, review, and circulation, streamlining documents, and reducing supervision and inspection. From January to July 2019, the State Health and Welfare Committee issued 621 documents, of which 478 were not checked and checked by the office, and were distributed by the business departments through the QQ group in the form of white-headed or memo letters. The quality is not high; 43 inspections and inspections were carried out in the name of research and guidance, and some departments conducted inspections and assessments within one month. The burden on the grass-roots level should be reduced, causing adverse effects. Jiang Hongbo, deputy director of the State Health and Welfare Committee in charge of the office, is responsible for the main leadership and is punished by the party's warning; other relevant responsible persons are dealt with by the party's warning, exhortation talk, reminder talk, etc.

Honghe Hani and Yi Autonomous Prefecture of Yunnan Province has made statistical data fraud in the national economic census. In 2019, during the registration of the fourth national economic census in Honghe Prefecture, the relevant functional departments of the state and county and the township government took measures to intervene in statistics by issuing false approvals, filling in and submitting reports, instructing, instructing, and forcing the census subjects to provide false information. At work, the statistics of Jianshui County and Luxi County were seriously inaccurate. During the inspection at the higher level, some units and leading cadres also used methods such as dissolving the QQ work group, destroying certification materials, and providing false information to hinder the supervision and inspection. Some county leaders also requested that the "inspected unit bear its own responsibility and must not designate the county party committee and county government" . Honghe Prefecture made statistical frauds in the national economic census, and the state party member and deputy governor Zhou Zhu, who was in charge of the statistical work, was mainly responsible for the leadership and was punished by the party’s warning; Mao Zongmei, the former county party secretary of Jianshui County, was severely punished by the party and was punished by the party. Removed the post of secretary of the county party committee; Feng Linchun, deputy secretary and county head of the original county party committee in Jianshui County, was severely warned by the party and punished for demotion of government affairs; Wang Jialin, secretary of the Luxi county party committee was punished by the party's warning; Mo Wei, deputy secretary of the county party committee and county head He was severely punished by the party. Other relevant responsible persons were dealt with due to issues such as issuing false approvals, instructing enterprises to submit false data, and hindering supervision and inspection.

Qi Junjie, a fourth-level investigator from the Handan City Archives in Hebei Province, has violated the regulations on the use of official vehicles. In March 2019, the Municipal Archives decided to temporarily arrange a village-based assistance vehicle to transfer and assist the poverty alleviation team and handle daily affairs. From May 1st to 3rd, 2019, Qi Junjie, the leader of the poverty alleviation working group, repeatedly used the car for non-official activities such as visiting relatives and friends and attending classmates’ meetings. Qi Junjie was severely warned and punished by the party and ordered to refund the related expenses.

Guo Longhu, former party general secretary of the Puxian Emergency Management Bureau of Linfen City, Shanxi Province, and fourth-level investigator, and others, violated the rules of accepting red envelopes and gifts. On February 14, 2020, the county emergency management bureau, health and sports bureau formed a joint inspection team to check and accept the resumption of production and occupational hygiene during a coal company's epidemic prevention and control. During the inspection by Guo Longhu, 15 staff members of the inspection team received red envelopes ranging from 1,000 yuan to 2,000 yuan, of which Guo Longhu received 2,000 yuan. Guo Longhu was punished by dismissing his party duties and dismissing his government affairs, and was reduced to the rank of second-level chief. Other members of the inspection team who received red envelopes were punished by serious warnings within the party, warnings within the party, dismissal of government affairs, and record of government affairs. Recovery. The Party Secretary and Director Zhang Guoping of the County Emergency Management Bureau, and the Party Secretary and Director Tian Ying of the County Health and Sports Bureau were the main leaders responsible for the violation of the rules and regulations of the staff and received warnings from the party; other related persons were dealt with accordingly .

Yan Xianchun, a member of the CPPCC Party Group, Secretary General, and Director of the Office of Weishan County CPPCC, Jining City, Shandong Province, and others violated regulations to organize public-funded tourism. In June 2019, when Yan Xianchun led the team to go out for training, he decided to bypass the other areas for 2 days without authorization, and issued a tourism "subsidy fee" of 1,000 yuan for 17 participants. During the tour, the board and lodging expenses of RMB 18,700 and the "subsidy fee" of RMB 17,000 were all paid in public funds. After the training, Yan Xianchun reported to the county party committee secretary and chairman Han Ruiping about the detour and the payment of "subsidies", but Han Ruiping did not correct it. Han Ruiping was warned and punished by the party. Yan Xianchun was severely warned and punished by the party, and other relevant personnel were dealt with accordingly. Subsidies issued in violation of regulations and fees payable by individuals have been recovered.

The National Discipline Inspection Commission of the Central Commission for Discipline Inspection emphasized that the six problems mentioned above all occurred after the 19th National Congress of the Communist Party of China, and some even occurred during the epidemic prevention and control period. Among them, there were both formalism, bureaucracy, and luxury. Some of them have been implemented in the form of burden reduction at the grassroots level, some have been falsified by statistical data in economic censuses, some have been used for private purposes in poverty alleviation work vehicles, and some have taken the opportunity of resuming work and resuming production inspections and operating wedding and funeral occasions. Received red envelopes and gifts, some went out for training to change the itinerary, took the opportunity to travel with public funds, and paid subsidies in violation of regulations. These party cadres ignored the Central Government's three orders and five orders, and they did not care about or awe of the party's discipline. We acted in our own way and committed crimes under the "high-pressure line". They were severely dealt with and the lessons were extremely profound. The majority of party cadres must take this as a precaution and always reflect on themselves.

The National Discipline Inspection Commission of the Central Commission for Discipline Inspection pointed out that this year is the year of fully building a well-off society and ending the 13th Five-Year Plan. The decisive battle to overcome poverty and the task of building a well-off society in an all-round way are arduous and arduous. The vast number of party members and cadres must consciously enhance the "four consciousnesses", strengthen the "four self-confidences", achieve the "two safeguards", unify their thoughts and actions into the party's central government's decision-making and deployment, and continuously improve their political positions and maintain their political power. Act as an act, seek truth and be pragmatic, and gather the majestic power of a secretary to start a business.

The National Commission for Discipline Inspection of the Central Commission for Discipline Inspection emphasized that the spirit of implementing the eight central regulations and correcting the "four winds" must be uncompromising and work for a long time. Adhere to quantitative changes, there will be qualitative changes. Discipline inspection and supervision agencies at all levels should have a deep understanding of the responsibilities and missions they shoulder, persistently consolidate and expand the effectiveness of the construction of style, and promote the practice of customs and habits. It is necessary to carry out supervision and inspection around the Party Central Committee's major decisions on the overall planning of epidemic prevention and control and economic and social development, doing a good job of "six stability", and implementing the "six guarantees" task to ensure the implementation of the party's line, principles and policies. We must continue to hold on to the hard levers of the essay reduction conference, so that grassroots cadres have a real sense of gain. We must deeply understand the stubbornness and repetitiveness of hedonism and extravagance, dig into the problems of violation of discipline and stealth mutation, and prevent the recurrence of old problems, the emergence of new problems, and the rise of small problems. During the “Dragon Boat Festival” holiday, we must continue to maintain a high degree of vigilance, focus on outstanding issues such as eating and drinking in violation of regulations, and receive gifts and gifts in violation of regulations, strengthen publicity and education, carry out supervision and inspection in accordance with rules and regulations, and resolutely prevent the rebound of hedonic luxury under the normal situation of epidemic prevention and control. Resurgence. It is necessary to insist on coordinating and advancing the "Four Winds" and correcting the "Four Winds" in parallel with the establishment of a new wind, so that the work style will be further improved in an all-round way. It is necessary to firmly establish the people-centered thinking, transform the party's feelings for the people into new practices in style construction, unite the party's hearts and people's hearts with excellent styles, and provide a strong style guarantee for the overall promotion of epidemic prevention and control, a decisive victory in all-round well-off, and a decisive battle against poverty. 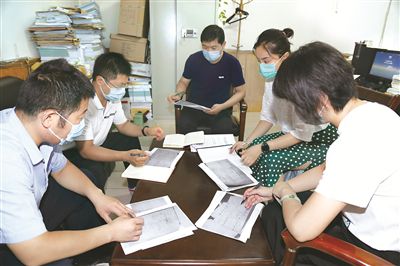 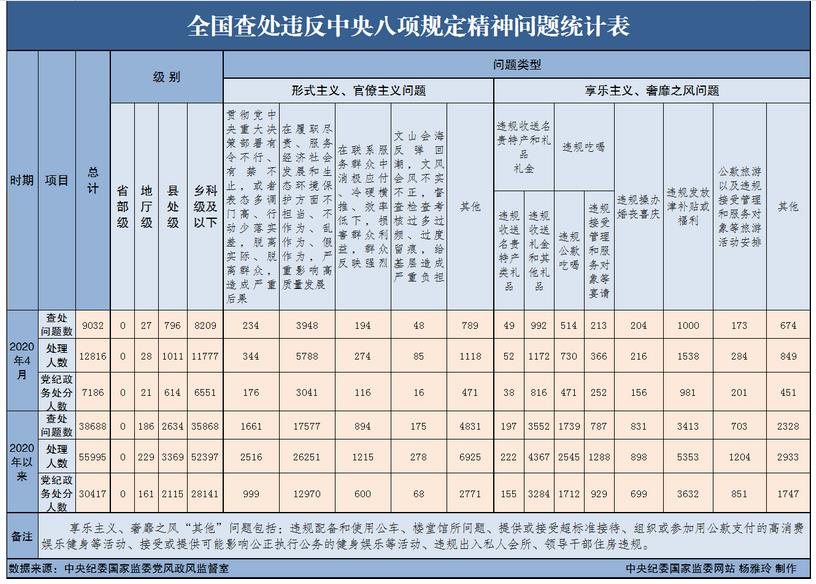 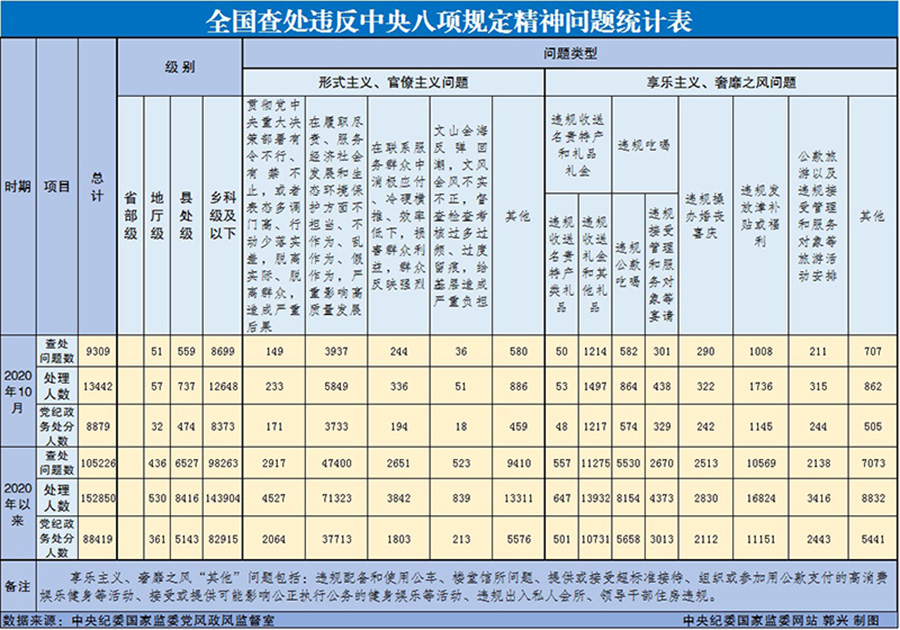 News/Politics 2020-11-23T12:44:23.567Z
In October, 9,309 mental problems in violation of the eight central regulations were investigated and dealt with nationwide

News/Politics 2020-04-29T02:47:54.326Z
Six typical problems in violation of the spirit of the eight central regulations stipulated by the tax system

News/Politics 2020-10-16T07:21:49.023Z
Zeng Yu, a former party member of the Guangdong Provincial Department of Ecology and Environment, was "double-opened" 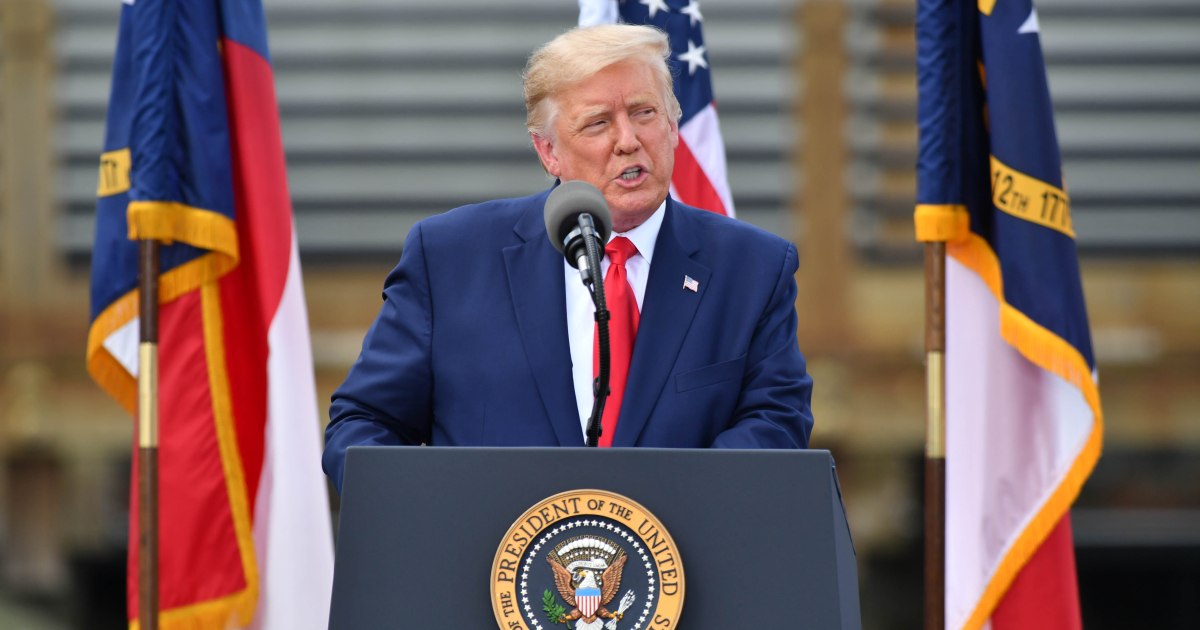