“I can’t think normally”: how are the hearings on the extradition of Assange

The next hearing on the extradition of WikiLeaks founder Julian Assange will take place on November 18. According to the allegations, in the United States he can be sent to prison for up to 175 years. Shortly before this, the UN announced London’s refusal to investigate Assange’s possible torture in prison. Experts are sure that Western states, using the example of the case of the founder of WikiLeaks, demonstrate double standards of justice, and the trial of a detained journalist is a political process. 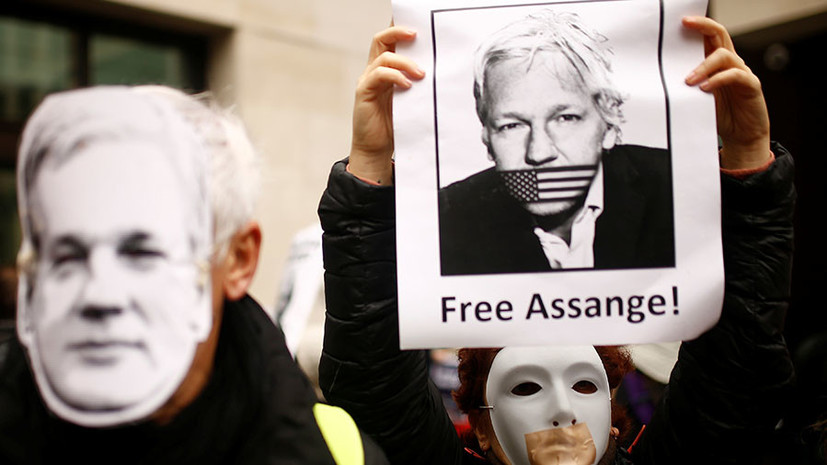 The next hearing on the extradition of WikiLeaks founder Julian Assange will be held on November 18, the Westminster Magistrate Court in London ruled.

“The next hearing will be held on November 18 ... The defendant can participate by video link from the prison where he is serving his sentence,” the judge said, referring to the Belmarsh correctional facility in which Assange is located. Her words are quoted by RIA Novosti.

Note that at today's meeting Assange was present in person. According to RIA Novosti, after Assange appeared, the judge asked him if he could confirm the name and date of birth. The WikiLeaks founder answered this question in the affirmative.

It is noteworthy that the “guest” tribune of the court was completely filled, since many supporters of Assange came to the courtroom. They were also present at the meeting building and demanded the release of the founder of WikiLeaks.

However, at the end of the meeting, the trial judge asked Assange if he understood what was happening in court today.

"Not really. I can’t think normally, ”he said.

According to the judge, the process will be continued in three stages, at each of which the parties will present their arguments. Hearings will also be held in December, January and February, and in essence the case will be considered at the end of February, as planned.

In turn, Assange’s defense asked the court to postpone the hearing for three months, explaining this need by the complexity of the process.

According to the representative of Assange, only last week they were transferred documents on the case. They are sent by mail, and the founder of WikiLeaks in prison does not have access to a computer.

“The issues raised in this case are complex and require the collection of evidence and research by their lawyers,” he said.

In addition, the defense considers it necessary to reflect in the case that the United States "intercepted" messages while Assange was communicating with lawyers while he was at the Embassy of Ecuador.

Commenting on the position of Western justice in the situation with Assange, the executive director of the monitoring organization CIS-EMO Stanislav Byshok drew attention to the difference in the Western public's perception of the activities of the founder of WikiLeaks and some American officials.

“The paradox: on the one hand, Assange, who faces an infinite number of life sentences, on the other hand, for example, American top officials who“ merge ”information about confidential negotiations, for example, Trump with Zelensky,” the expert said in an interview with RT.

Recall that Assange spent about seven years at the Embassy of Ecuador in London. He came to the diplomatic mission with a request for political asylum in June 2012, and in April 2019 the British police detained him in the embassy building.

In turn, shortly after these events, the President of Ecuador, Lenin Moreno, stated that the British authorities in an interview with him denied the possibility of Assange being extradited to a state where torture or the death penalty awaits the journalist.

In May, a court in London sentenced Assange to 50 weeks in prison for violating bail conditions. Later that month, the US Department of Justice brought 17 new charges against Assange. The department said that Assange could face up to 175 years in prison.

Later, UN Special Rapporteur on Torture, Niels Meltzer drew attention to cases of abuse by Assange in a British prison. A representative of the organization sent a letter to the British authorities calling for an investigation, but official London rejected the relevant charges, Meltzer said in an interview with RT.

“For four months I have not received any response at all. The UK later sent a very short letter, literally two paragraphs, in which it rejected all allegations of involvement in the ill-treatment of Julian Assange, ”Meltzer said.

He noted that the UK is a party to the UN Convention against Torture, which obliges all signatory countries to promptly conduct impartial investigations if there are sufficient grounds for this.

“That is, the agreement, with all obviousness, requires London to conduct an objective investigation,” the UN Special Representative emphasized.

Speaking about the behavior of the British authorities, Deputy Director of the Institute of History and Politics of the Moscow State Pedagogical University Vladimir Shapovalov told RT about the double standards policy resorted to by London.

“In fact, we are witnessing a situation in which representatives of Western non-governmental and state structures constantly position themselves as leaders of the movement for the humanization of the rights of prisoners, and on the other hand, in this particular case, Western human rights defenders and state structures prefer not to pay attention to what is happening in certain western countries, ”the expert noted.

“I think that this is a political process from start to finish, therefore, there can be no talk of any justice as such,” the expert summed up.