Neither the core of the Earth has stopped nor has the direction of rotation changed: what do the changes measured inside the planet mean

What happens in the bowels of the Earth is one of the most fascinating but also most enigmatic issues in science due to the obvious impossibility of making measurements... 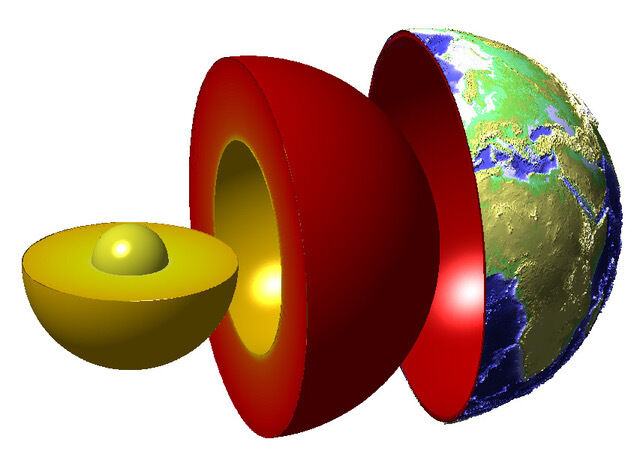 What happens in the bowels of the Earth is one of the most fascinating but also the most enigmatic issues in science due to the obvious impossibility of making direct and precise measurements at those depths.

This week, a new investigation led by scientists from Peking University on the behavior of the Earth's core (the innermost layer of the planet) has had a great media coverage despite the fact that its results "were already known by the scientific community

for years and basically represent a new input of data, so

it is neither new nor worrisome

"This is what Maurizio Mattesini, professor of Earth physics at the Complutense University of Madrid (UCM) and researcher at the Institute of Geosciences (IGEO/CSIC-UCM) assures this newspaper.

As suggested in the magazine

Yi Yang and Xiaodong Song, the rotation of the solid core of the Earth had slowed down.

The Chinese researchers added that "the detected changes in rotation occur on a scale of decades" and "may help to better understand the internal processes of the Earth."

To reach the conclusion that the core is now rotating more slowly, they selected earthquakes originating in the South Sandwich Islands, in the Atlantic Ocean, and studied the signal recorded at an observatory in Alaska, almost on the other side of the planet, to analyze the The time it took for the waves that had crossed the Earth's core to arrive, always following the same trajectories.

As is known, the Earth is composed of several layers: "L

the deeper the solid inner core

(a sphere composed mostly of iron and some nickel, the heaviest elements, because due to gravity they have gone towards the center of the planet).

That solid core is inside a liquid outer core (a layer of cast iron), which is the viscous part, a kind of mattress that causes the inner core to uncouple.

On top is the mantle (composed of lighter minerals, such as silicates)," explains Mattesini, who specializes in core research. And on top is the earth's crust.

"This Chinese research is interesting, but

It is further evidence of the decoupling in the relative velocity of the core with respect to the mantle.

There are decades in which the nucleus was a little faster than the mantle, others in which it was slower, and in some intervals it was the same.

an article in the same magazine

which already detailed how some decades went faster and others slower.

And now, these scientists have made an update, saying that since 2009, it is slowing down a bit, which is something that is perfectly in line with what was already known," Mattesini says in a telephone interview. They call this phenomenon

The scientist shows his concern about some information that has been published since Monday:

"It is being said that the Earth's core has stopped and reversed, and that is not true.

I want to avoid that alarmism.

What there are are small variations in speeds," says Mattesini, who adds that there are scientists who do not even consider that there is a difference in rotation.

the shape of the earth

the shape of the earth

What consequences can this uncoupling with the mantle have?

"If you do the projection from the 1970s to the present, and add up how much it goes up and down,

, is really very little and has no repercussions on the lives of people or animals.

Since the 70s there has been talk of a possible variation ", he reiterates. However," these oscillations in the decoupling of the speed

are interesting for the future to study if it has any link with the fluctuation of the magnetic field.

or, but it is something that is under study".

The magnetic field, he explains, "protects us from the damaging effects of the sun's rays and, therefore, is essential for life on Earth, if it were not there we would all develop cancer. This magnetic field has its origin in the movement between the nucleus and the outer core (the liquid mattress). There are people studying the reversal of the magnetic field and its weakening, in case it is related to that fluctuation of the inner core with respect to the mantle, but we still don't know much about it."

"The first thing that must be made clear is that the nucleus has not stopped," the researchers agree

As stated in an explanatory forum published on the CSIC website,

the Earth, with all its layers, is rotating in such a way that it takes approximately 24 hours to complete one revolution." According to this new study, the core would have slowed down until it reached the same rotation speed as the outermost layers or even a speed slightly lower "These differences in relative speeds are very small," they explain.

The researchers note that "this slight shift in core rotation is not the first time it has happened.

The data show another similar event in the 1970s." Currently, they add, "it is thought that this phenomenon of periodic variation in the rotation of the nucleus is due, on the one hand, to the electromagnetic interaction between the inner and outer core that tends to to accelerate the inner core and, on the other, to the gravitational coupling with the mantle, which forces it to return to rhythm".

The three scientists summarize their assessment of the research thus: "Does the study say that the nucleus stopped dead in its tracks in 2009 and that it is going to start spinning in the opposite direction? No,

it has only changed its velocity relative to the crust

No, the nucleus continues to spin and the magnetic field will continue to be generated.

Will this phenomenon have implications for the climate?

The article proposes that some relationship might exist, but that the origin of the multidecadal variations in climate is not yet fully understood.

It doesn't seem likely that such small changes in core rotation could have really appreciable effects."