From the ocean to the Gulf.. Arab artists cheer for the "Atlas Lions"

Great joy spread throughout the Arab world with the qualification of the brotherly Moroccan team to the quarter-finals of the 2022 World Cup held in Qatar, as the first Arab team to achieve this historic precedent, after defeating the Spanish national team. 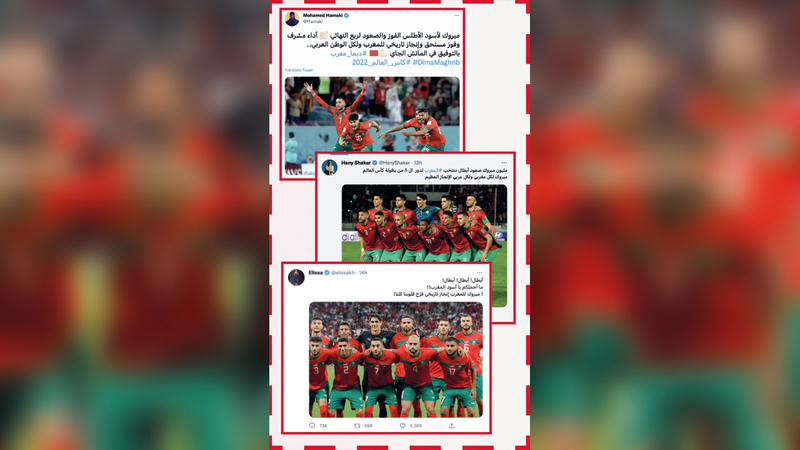 From the ocean to the Gulf.. Arab artists cheer for the "Atlas Lions"

Great joy spread throughout the Arab world with the qualification of the brotherly Moroccan team to the quarter-finals of the 2022 World Cup held in Qatar, as the first Arab team to achieve this historic precedent, after defeating the Spanish national team.

The great joy of the victory of the “Atlas Lions” quickly resonated with the stars of art, singing and Arab celebrities, who were keen, each of his sites, to share the Moroccans’ overwhelming joy and pride in their country’s victory, and to be an active part in the waves of public celebration of this great sporting achievement on digital platforms. Expressing, each in his own way, the glory of this victory, and the surprise of qualification, wishing success to the “Atlas Lions” to continue the journey of his upcoming successes, and to draw a smile on the faces of the Arabs in this global football festival.

The Emirati artist, Ahlam, was the first of the Arab artists to congratulate the Moroccan team on its victory over Spain. Our head... This lion is Moroccan.”

And the artist, Nawal Al-Kuwaiti, expressed her participation in the joy of Morocco by saying, “A fictional match that ended with a legendary victory. Our joy, O Lions of the Atlas.” At a time when Emirati artist Hussein Al Jasmi was quick to comment on this victory in the Moroccan dialect, saying, “Raise your head, you are Moroccan,” followed by the Emirati artist. Belqis, who was excited to express her pride in this victory by singing for the team, said on her official account on Twitter, "Congratulations... tonight I have your party... Qatar will celebrate you tonight and I will celebrate with you."

The Moroccan artist, Samira Said, did not wait long to say her word in this regard, as the artist took the initiative to publish a video clip accompanied by her son Shadi, from the Education City stadium in the Qatari capital, expressing her great joy at the victory of her football team, saying, “Praise be to God … a wonderful victory. One of the most beautiful matches that I attended in my life.. Great joy and pride for Morocco and the Arab world, "adding, "Really a historic achievement," which prompted the Syrian artist Asala to republish Samira Said's tweet, and the Arab audience shared his joy with these words, "Congratulations to all of us on this great victory and Eid." Who bears all the joy.” And she added, addressing her speech to Samira Said, saying, “God willing, all life is happy, and your laughter is decorated with religion, and Shadi is crazy, may God protect him.”

And from the land of Egypt, in which joy prevailed, the Egyptian artist, Hani Shaker, hastened to comment on the victory of the Atlas Champions on his official page on Twitter, saying, “A million congratulations for the rise of the Moroccan national team, congratulations to every Moroccan and every Arab for the great achievement.”

As for the Tunisian artist, Saber Al-Rubai, he preferred to publish the image of the Moroccan team prostrating, commenting by saying, “A thousand million congratulations to the brotherly Moroccan national team and to all the Arab world for this historic victory, and God willing, the championship and permanent victory in all the upcoming matches, champions.”

The Egyptian artist, Amr Diab, did not lag behind the wide artistic celebrations on social networking sites, to hasten to publish the image of the Moroccan national team on his official page on Twitter, and commented, “Congratulations to the Atlantic Lions for the well-deserved qualification, with my heartfelt wishes for success in the next.” For the Egyptian artist, Mohamed Hamaki, who wrote, “Congratulations to the Atlas Lions for winning and ascending to the quarter-finals. An honorable performance, a well-deserved victory, and a historic achievement for Morocco and the entire Arab world … Good luck in the next match.”

He added, “It is always Maghrib.”

The Syrian artist, Abed Fahd, published a picture of the heroic Moroccan goalkeeper, who was the shield of the "Atlas Lions" in the penalty kicks, saying, "Congratulations to Morocco, the Atlas Lions." While the Lebanese artist, Ragheb Alama, published a picture of him while watching the historic match, saying, "One million congratulations to Morocco. .. Champions".

For her part, the Lebanese singer Elissa commented on this event with the call, “Heroes!

How beautiful you are, O Lions of Morocco.. Congratulations to Morocco, a historic achievement, which made all of our hearts happy.

The Egyptian artist, Mohamed Heneidy, considered the Moroccan victory step the culmination of Arab football in general, initiating the publication of the image of the Moroccan team and commenting, “Champions, champions, champions to the quarter-finals. Congratulations to all the Arab world, and congratulations to all the people of Morocco. History is being written again, and the writer of history will not dare to close The book is before history is written again.” Followed by the Egyptian artist Youssef Al-Sharif, who wrote, “Morocco is making history … Congratulations to all Arabs.”