The US President's strategy made it clear that his country has long been considered a leader in trade and investment, that for 75 years it has maintained a strong and steadfast defense presence, and that it will continue to work for its stability and safety. 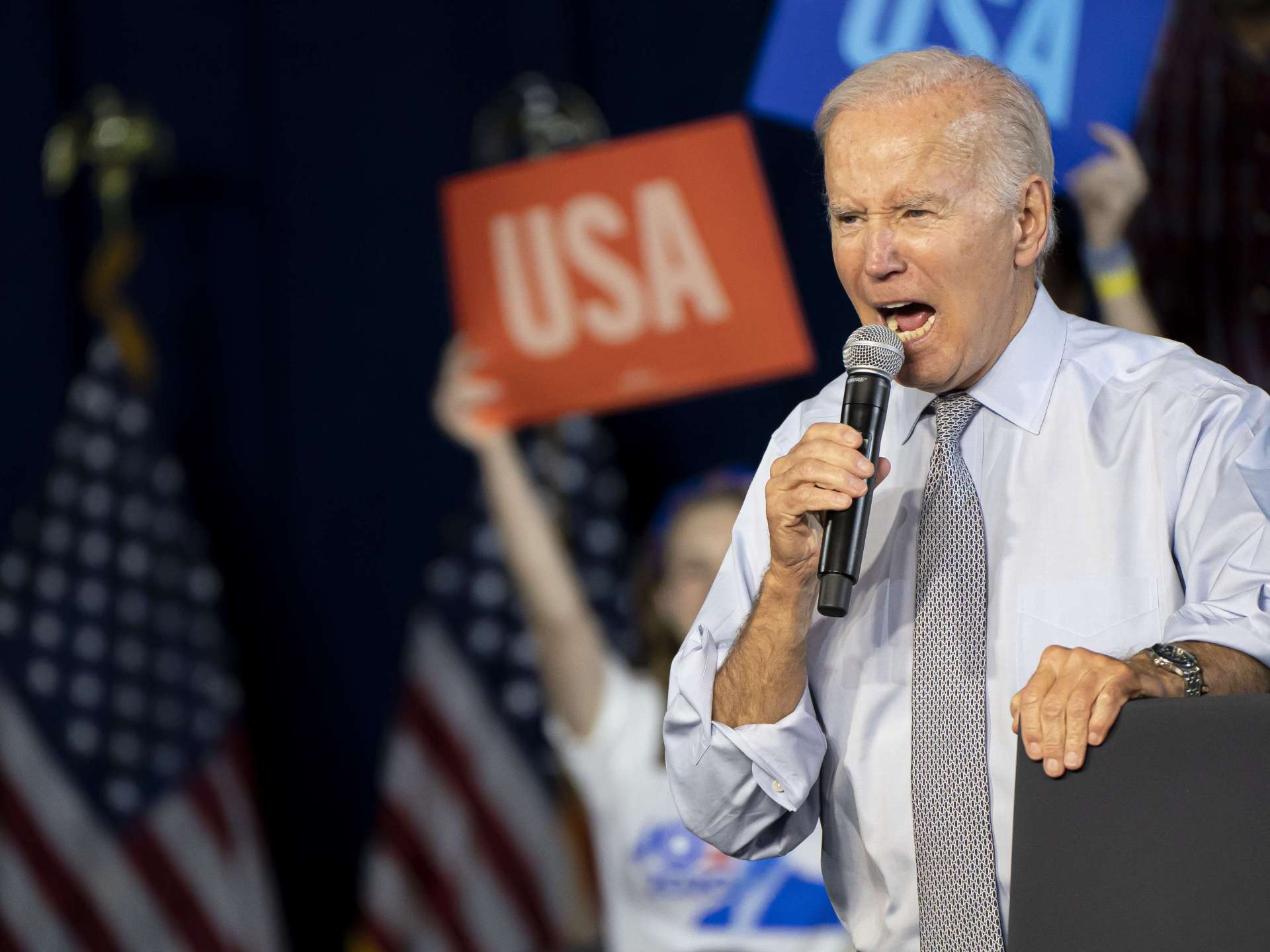 After President Joe Biden's US national security strategy elaborated on the major challenges and common challenges facing his country and its allies, on top of which is the greatest threat posed by China and Russia, which is considered an existential threat, not only to the United States, but also to the current Western civilization and the world order. which you dominate with its charters, agreements, treaties, organizations and decisions;

After this strategy finished reviewing the challenges, plans and policies it prepared to confront them, I moved in the fourth part of it to talk about Biden’s strategy towards the main geographic regions of the world, and his vision based on global partnership with all countries of the world to meet the challenges of the current decade, which the strategy indicated, in In several places, it is a decisive decade in human history.

Without explaining why this contract acquired this character, and what we expect to happen or achieve in the remaining years of this contract?

Biden's strategy considers that the Indian and Pacific Oceans region will be the focus of geopolitics in the 21st century AD, and that the interest of the United States, as the main power in the two oceans, lies in achieving an open, interconnected, prosperous, secure and flexible region.

Map of influence and domination

Biden's strategy divides the world into 7 regions that represent the permanent strategic work of the United States, making it clear that Americans depend on the broad and deep relations of the United States in each of these regions, and benefit from them in investment, trade, study, work, and live in most of its countries.

Countries of the Indian and Pacific Oceans

The American strategy considers that the region of the Indian and Pacific Oceans will be the focus of geopolitics in the 21st century AD.

As the United States is the main power in these two peripheries, its vital interest lies in achieving an open, interconnected, prosperous, secure, and resilient region in it.

This strategy stresses that the United States will work with other regional countries to keep this region open and accessible, while ensuring that its countries are free to make their own choices, in accordance with their obligations to international law, in reference to China, which the United States considers the greatest threat to the stability of this region. region and the sovereignty of its states.

Biden's strategy indicated that the United States has long been considered a leader in trade and investment in the region, and that for 75 years it has maintained a strong and constant defense presence in it, and that it will continue to work to achieve its stability and safety.

It emphasized the solid US commitments to its allies in the Indo-Pacific Treaty (Australia, Japan, South Korea, the Philippines and Thailand).

The US strategy indicates that the relationship with Europe is rooted in common democratic values, common interests, and historical ties, and that Europe was, and will remain, the main partner in addressing global challenges.

Hence, the United States is on a common and effective global agenda with Europe, and will strengthen the North Atlantic Treaty Organization, raise the level of ambition in the relationship between the United States and the European Union, and stand together in defending the “rules-based international order” on which the security, prosperity, and values ​​of both parties are based.

The United States will work with the European Union to promote trade, investment, and technology cooperation based on shared democratic values, to promote an open and inclusive global economy, to set high standards for trade, to ensure fair competition, to uphold workers' rights, to decarbonise, to fight corruption, and to protect innovation from harmful uses. It conflicts with the interests and values ​​of both parties.

Biden's strategy stresses the United States' commitment to preserving a united, free, and peaceful Europe, and considers the Russian invasion of Ukraine a serious threat to Europe. Therefore, this strategy emphasizes the determination of the United States and the European Union to support Ukraine in defending its sovereignty and territorial integrity.

Biden's strategy considers this region the most influential on the United States, with annual trade with it reaching $1.9 trillion, as well as shared values, democratic traditions, and family ties, which make this region, especially in North America, a major contributor to the prosperity and resilience of the United States.

This strategy believes that it is necessary for the United States to work to revitalize its partnerships in the countries of the Americas to build and maintain economic resilience, enhance democratic stability, and preserve the security of citizens.

The president's strategy indicates that the United States will continue to modernize its border infrastructure, and build a fair, orderly, and humane immigration system, with a bold partnership with the countries of the region, centered on the principle of sharing responsibility, stability, and assistance to those affected.

It will also continue the mission of expanding legal pathways for migration and combating illegal human smuggling, the trafficking that preys on vulnerable migrants.

In a high and unrealistic spirit of optimism;

Biden's strategy confirms that through it, the United States will be able to face major and common challenges, strengthen democracy around the world, and succeed in achieving the requirements and priorities of this crucial decade.

Given the specificity of the region and its direct relationship with the Arab public, I singled it out in a previous article, in which I explained: How the US strategies deal with the Middle East as a fuel tank and strategic waterways, nothing more.

Successive administrations have worked diligently to change the conflict equations in the region, in order to achieve their interests and the interests of the state of the Zionist entity, and to end the state of enmity between it and the Arab countries, to jointly head towards Iran, which has already become that enemy that destabilizes the region and threatens its peace, security and prosperity, while The Zionist entity has become a strategic partner and a vital axis to achieve its security and prosperity.

The continent of Africa includes more than 60 countries and territories, and it is the most among the continents, and despite its enormous wealth, it is the poorest, underdeveloped, tyrannical, wars, and suffering continent, despite the many regional and international plans and decisions, which have not yet been able to stop conflicts, establish peace and achieve stability. and accelerate development.

In a remarkable sign, Biden's strategy stresses that promoting US national interests in Africa depends not only on working with the governments of African countries, but also more closely with regional bodies, such as the African Union, civil society, the private sector and diaspora communities.

The United States will focus on investing in the largest countries in the region, such as Nigeria, Kenya and South Africa, while working to deepen its relations with medium and small countries.

It also emphasizes working with African countries as equal partners, to achieve common priorities, while pressuring partners on human rights, corruption, or authoritarian behavior, and will work to deepen partnerships with countries that are making progress towards more open and democratic governance.

The Arctic region has witnessed strategic competition between Russia and the United States since the era of the Cold War with the former Soviet Union, and the American strategy indicates that Russia has significantly (strengthened) its presence in the Arctic over the past decade, as it modernized its military infrastructure and increased the pace of exercises and training operations. , which led to an increase in geopolitical tensions in this region, the emergence of new risks of unintended conflict, and the impediment of international cooperation, and China also sought to increase its influence in the Arctic by increasing its investments there.

Biden's strategy affirms that the United States will work to strengthen its presence in the region, maintain its continued enjoyment of peace, stability, prosperity and cooperation, reduce risks and prevent escalation, while increasing responsible economic activity of the private sector by the United States and its allies and partners, to invest in infrastructure and improve livelihoods. , as well as improving investment opportunities for national security purposes.

Protection of the sea, air and space

The President's strategy stresses that the United States will defend freedom of navigation and overflight, support environmental protection, continue to oppose destructive fishing practices in far waters, promote adherence to international laws and norms, and advance Antarctica's status as a continent dedicated to peace and science in accordance with the provisions of the Antarctic Treaty 1959 AD.

The US strategy states that space exploration and use will benefit humanity and increase the creation of economic opportunities for the development of new technologies to monitor climate changes, stressing that the United States will maintain its position as a leader in space, working side by side with allies, partners and the international community to ensure the sustainability, safety, stability and security of space. Develop policies and regulations that enable the US commercial space sector to compete internationally, in order to protect US interests in space, avoid destabilizing arms races, and achieve responsible environmental management of space.

In a high unrealistic spirit of optimism;

Biden's strategy in the conclusion confirms its confidence that the United States, along with its allies and partners, is able to succeed in achieving a free, open, prosperous, and secure world order, and that through this strategy the United States will be able to face major challenges and common challenges, and to promote democracy in all parts of the world. , and setting new and fair rules of the road for emerging technology, cybersecurity, trade and economics, guided by the fact that the strength and quality of the American project at home is closely linked to its leadership in the world, and its ability to shape the conditions of the global system.

With the assurance that this strategy will make life better, safer, and fairer for the American people, and for countries and people who share our vision for the future around the world.

Once again, the US strategy refers to the current critical decade, which was expressed by the Biden administration's vision of what success will be like at its end.

Biden's strategy concludes by saying, "This is what we must achieve in this crucial decade, as we have done throughout our history. America will seize this moment and rise to the level of the challenge. There is no room for wasting time."

(To be continued... the contradictions of Biden's strategy)