How to green the city starting with the roof

All year round it is an edible carnival on the terraces of Robert Strauss in the Gràcia neighbourhood. It is one of the great advantages that Barcelona has, which can be cultivated even in... 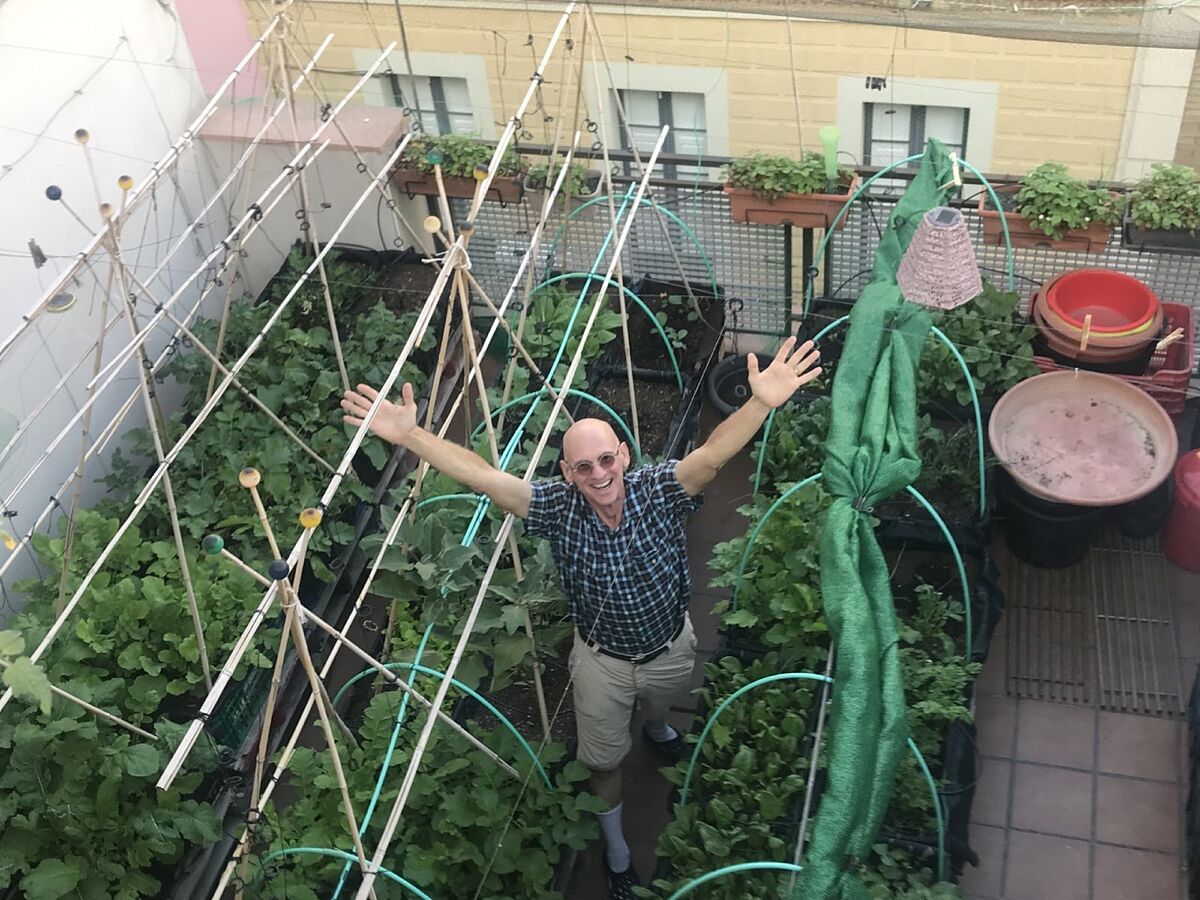 All year round it is an edible carnival on the terraces of Robert Strauss in the Gràcia neighbourhood.

It is one of the great advantages that Barcelona has, that it can be grown until December, and there we have potatoes, broad beans, turnips and, of course, calçots (spring onions), ready for the typical winter 'calçotadas' .

Of course, everything has its counterpoint, and the thermometer shot up to 51.7 degrees on May 25 on one of the five Robert Strauss terraces, which measures everything with millimeter precision.

Although in the shade, in the space under the grow boxes, the temperature recorded that same day was 36.7 degrees, "which serves to give us an idea of ​​how green roofs can cool roofs exposed to the sun." .

Barcelona also has another great advantage: 67% of the rooftops are flat.

Joan Carulla, 99, knows the advantages of cultivating on rooftops better than anyone, half of them dedicated to her 260-square-meter garden in the Clot neighborhood.

The 'grandfather' of the green roofs has received precisely this year the prize that bears his name, created by the Replantem association, where a long score of cultivation enthusiasts at height shake hands.

Among them, Robert Strauss.

Robert Strauss (New York, 1955) has been nicknamed the 'Tarzan of the terraces' by the veteran Carulla, due to his ability to glide up and down portable ladders through the five levels, between his own terraces and those that lend him their neighbours, in exchange for a part of the harvest that he uses for home consumption.

With his contagious smile and his bustle across the rooftops, Robert also has something of an elf in this kind of vertical forest, where he appears and disappears among the climbing greenery, before the complicit eyes that wave from the windows.

- What do we have today?

- Well, right here, some chilies known as the Thai Dragon, because of their bright red color and because of how spicy they are.

Robert is especially happy this year with the splendid potato harvest, about 27 kilos in the first harvest, and ready for the second.

Of course, the heat wave caused the tomato and cucumber harvests to end in August.

And the lack of rain led to a plague of red spider mites that also affected broad beans and aubergines.

It is better not to talk about corn and sunflowers because they have resisted successive attempts.

Although more than the high temperatures, what affects his home production are the great variations and unpredictability in any season of the year: "The weather is crazy, crazy, crazy... Last winter we hardly had any rain. January was the hottest history. And suddenly in March we had hail twice in ten days, and that did a lot of damage to the crops."

Robert Strauss has devised his own cultivation system, avoiding putting soil directly on the ground and using mainly plastic boxes -rescued from greengrocers- as flowerpots.

A total of 140 culture boxes, according to the last count, are distributed throughout the five heights.

The earth feeds it with his homemade compost factory that he has in the jungle interior patio, where they have gathered banana trees and even a lucuma from the Andes.

In winter he waters mostly with a hose, although his dream is to install a rainwater harvesting system.

Let's say that everything he knows he learned by himself and by observing.

In San Francisco, thanks to his friend Martin, who introduced him to urban agriculture.

In Cameroon, where he was director of the Peace Corps for five years, directly inspired by the caretaker and gardener Moses.

Although it was really during his stay in Madagascar, where he was in charge of a 1,500-square-meter garden, where he began to work on soil regeneration and composting.

Robert is often defined as "a retired American writer", awarded three times at the Lowell Thomas Awards (sort of like the Oscars of travel journalism).

Tired of traveling the world, he decided to put down roots in Barcelona in 2012 with his artist wife, Nina, and his 15-year-old daughter.

They decided that the city had everything they were looking for, and they embarked on the difficult task of making Gràcia green from within.

"Barcelona can become a world benchmark for cultivation at altitude, but we are still a long way off," he says.

"Among other things because there are very restrictive laws that prohibit the sale of urban agricultural products. With these restrictions in place, it is very difficult for people to have incentives to cultivate, as they do, for example, in my native New York, with the example of a commercial urban farm like Brooklyn Grange".

"In New York, the climate allows cultivation for only six or seven months, while in Barcelona it is possible 365 days a year, imagine the possibilities," says Robert Strauss.

"Cities will be green or they will not be, starting with the roofs," picks up the witness Adela Martínez, founder of Huertos in the Sky and main agitator of Replantem.

Back in 2018, contemplating the desolation of the empty rooftops from Barceloneta, Adela instead imagined a succession of orchards in the sky, combating the "heat island" effect and creating community among the neighbors at the same time.

The idea evolved until the creation of Replantem and the launch of Las 48 Horas (of Agriculture and Urban Green).

"In the two years, twenty green roofs have been promoted in the city, but it is difficult to make the leap if there is no continuity and commercial viability, that is why it is so important to change the law," says Adela, from the garden of the skies of the Barceloneta.

"This city, with its flat roofs and the green interiors of the "illas", has everything in its favor to become a laboratory for urban agriculture."