Released in the first round of the 2022 World Cup, the Ghanaians did not seek excuses after their fatal 2-0 defeat against Uruguay on December 2 in Al Wakrah. If they regret the penalty... 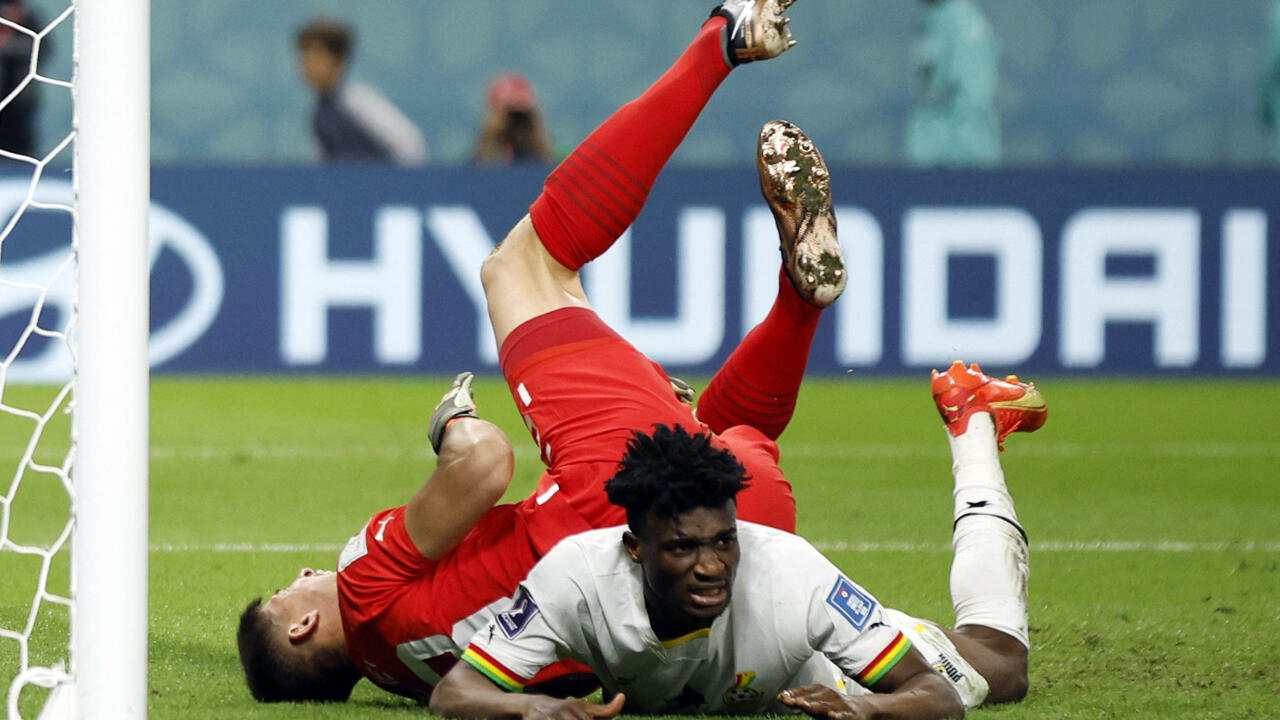 Ghanaian Mohammed Kudus, on the ground, against Uruguay, in the 2022 World Cup. REUTERS - JOHN SIBLEY

Released in the first round of the 2022 World Cup, the Ghanaians did not seek excuses after their fatal 2-0 defeat against Uruguay on December 2 in Al Wakrah.

If they regret the missed penalty by their captain André Ayew, they do not blame the midfielder.

And the Black Stars ensure that the elimination against the Uruguayans, in the quarter-finals of the 2010 World Cup, did not weigh psychologically on their performance tonight.

The Ghanaians preferred to discreetly leave the Al Janoub Stadium in Al Wakrah.

They did not have the heart to talk about

their 2-0 defeat against Uruguay

and their elimination in the first round of the

About 90% of the players were playing their first World Cup

It's really going to toughen us up

The playmaker was one of three Black Stars named to speak to the press, along with defender Daniel Amartey and goalkeeper Lawrence Ati Zigi.

I think we weren't very lucky

We had a penalty and we missed it.

Then it turned against us.

“André is a great leader and a great captain”

André Ayew actually had the opportunity to open the scoring.

But his strike was too soft to surprise the opposing goalkeeper, Sergio Rochet.

, warns Kudus, however, who flies to the aid of his eldest.

In the second half, I also had goalscoring opportunities that I could have converted.

We all had the opportunity to weigh in on this meeting.

So I don't think the penalty affected the final result.

André is a super leader and a super captain.

After missing the penalty, he got back into the game and devoted himself to the team like all of us

Ayew, the last survivor of Ghana-Uruguay of the 2010 World Cup, was he overtaken by the traumatic memory of this match, when shooting?

This fear is a thing of the past

It was twelve years ago and it's not something we had in our heads.

We were really focused on this game against the Uruguayans.

South Americans who were also eliminated from the tournament, for lack of having imposed themselves more widely against the Black Stars.

Frankly, it does not change anything

We had come to win, to pass.

The score changed in the other

and Uruguay wanted to score another goal.

But we stopped them

Ghanaians and Uruguayans then left the competition together.