Tales of Arab culture continue at the Guadalajara International Book Fair in Mexico, which celebrates Sharjah as the guest of honor for its 36th session, which continues until the fourth of this month, as the emirate’s pavilion is full of rich events that build cultural bridges between cultures. 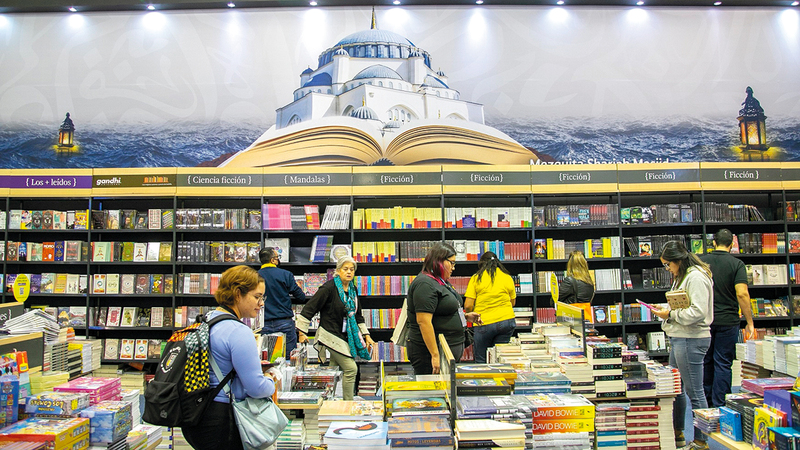 With a busy program worthy of the «guest of honor» exhibition

The suite of the "Gandhi" group is decorated with landmarks from Sharjah.

Tales of Arab culture continue at the Guadalajara International Book Fair in Mexico, which celebrates Sharjah as the guest of honor for its 36th session, which continues until the fourth of this month, as the emirate's pavilion is full of rich activities that build cultural bridges between cultures.

The Emirates Publishers Association participates in the activities of the exhibition, which is organized in the third largest city in Mexico, to enhance the presence of Emirati publishers at the global level, opportunities to conclude deals for the sale and purchase of publishing and translation rights, and to enhance cultural exchange with publishers, translators and intellectuals in Latin America who meet in Mexico.

Three Emirati publishers will attend with a selection of their publications in Spanish, and they will participate in dialogue and discussion sessions organized by the association at the exhibition to talk about the experience that seeks to build bridges between Arab culture and the Spanish-speaking world.

Al-Shehhi said, "The exhibition provides us with a unique opportunity to learn about the world of publishing in the Spanish-speaking markets of Latin America and Central America, and to introduce Emirati culture."

While Dr. Al-Yazia emphasized that “the Guadalajara Book Fair provides us with a global platform to communicate with Latin American publishers and workers in the publishing sector, which is an invaluable opportunity to get acquainted with Latin culture in general and Mexican culture in particular, and to introduce exhibition visitors from different cultures to the literary and cultural scene in the UAE.” ».

On the other hand, the "Gandhi" group, the largest bookstore chain in Mexico, celebrated Sharjah by displaying the emirate's cultural heritage and historical monuments in its pavilion at the Guadalajara Book Fair.

The walls of the "Gandhi" pavilion were decorated with letters, motifs, and movements forming the art of Arabic calligraphy, and its name was written in the Arabic language, the Diwani line, in addition to a group of heritage and cultural monuments that translate the essence of the ancient history of the Emirate of Sharjah.

The picture that appeared to the visitors of the group’s pavilion participating in the exhibition included “Sharjah Fort”, whose construction dates back to 1823 and was the seat of the Al-Qawasim family, the iconic Sharjah Mosque that embodies the art of Arab and Islamic architecture, and the Al-Qasimia University, which is an academic cultural beacon for science and literature that promotes the values ​​of dialogue. culture among civilizations.

The phrase "Tales from Here to Sharjah", written in Spanish, attracted visitors and readers, allowing them an interactive cultural experience about the emirate. The "Gandhi" group's pavilion showcases the spirit of Sharjah's culture and highlights its creative vision to deliver the jewels of Arabic literature to readers.

• "The exhibition provides us with a global platform to communicate with Latin American publishers and those working in the publishing sector."

In the midst of an audience of Arab and Mexican poetry lovers, at the Guadalajara Book Fair, the Emirati poet Sheikha Al-Mutairi read one of her most famous poems in the rap style, as she wandered on the platform of the poetry evening reading with an accelerated rhythm and spontaneous movements.

He also read, during the same evening, the Mexican poet José Gavier Vilorel, poems that succeeded in capturing the daily and the fleeting and turning it into a space for poetic meditation that reveals its owner's preoccupations and concerns.