1000 sailors row under the colors of the UAE flag

On the occasion of the celebrations of the 51st Union Day, the Emirates Heritage Club will organize the “National Day Race for Heritage Rowing Boats,” class 40 feet, tomorrow. 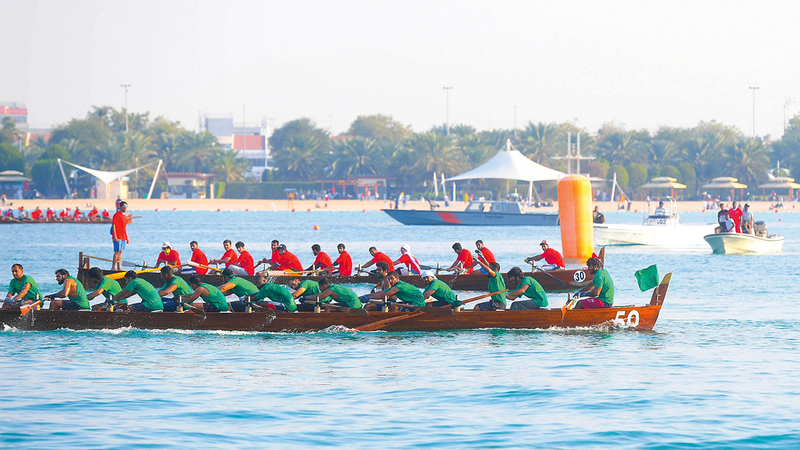 1000 sailors row under the colors of the UAE flag

The race will take place in 4 rounds.

On the occasion of the celebrations of the 51st Union Day, the Emirates Heritage Club will organize the “National Day Race for Heritage Rowing Boats,” class of 40 feet, tomorrow.

The race will take place in four runs, bearing the colors of the red, green, white and black flag of the state, with the participation of more than 58 boats and about 1,000 sailors, for a distance of four nautical miles, ending in front of the main platform in the heritage village of the club on the Abu Dhabi Corniche.

The Director of the Department of Racing and Marine Activities at the Emirates Heritage Club, Ahmed Abdullah Al Muhairi, confirmed during a meeting held yesterday, in the presence of captains and officials in the marine racing department in the club, and participating sailors, that all arrangements have been completed in order to ensure that the race comes out in a manner that befits the importance of the occasion and its place in the heart of all. Emirati, which is the anniversary of the establishment of the United Arab Emirates.

He praised the fruitful cooperation shown by the sailors participating in the race, and their keenness to adhere to all technical details and conditions of the race.

During the meeting, a lot was drawn for the four runs, and the conditions and technical instructions for the boats were emphasized, and the commitment to the colors of the runs and the values ​​of marine races in the country, as part of the national heritage.

It is noteworthy that the 40-foot National Day Rowing Boat Race is an annual event organized by the Emirates Heritage Club in order to revive the country's maritime heritage and ensure its preservation through generational communication, as the race brings together veteran sailors and youth.