They guard diplomatic missions and protect Washington's interests.. "Marines" are soldiers present in all American wars

The US Marine Corps, or what is known as the “Marines”, is a partially independent military force that falls under the supervision of the US Navy, but its command structure is similar to that of the army, except that it follows the “rule of three”. 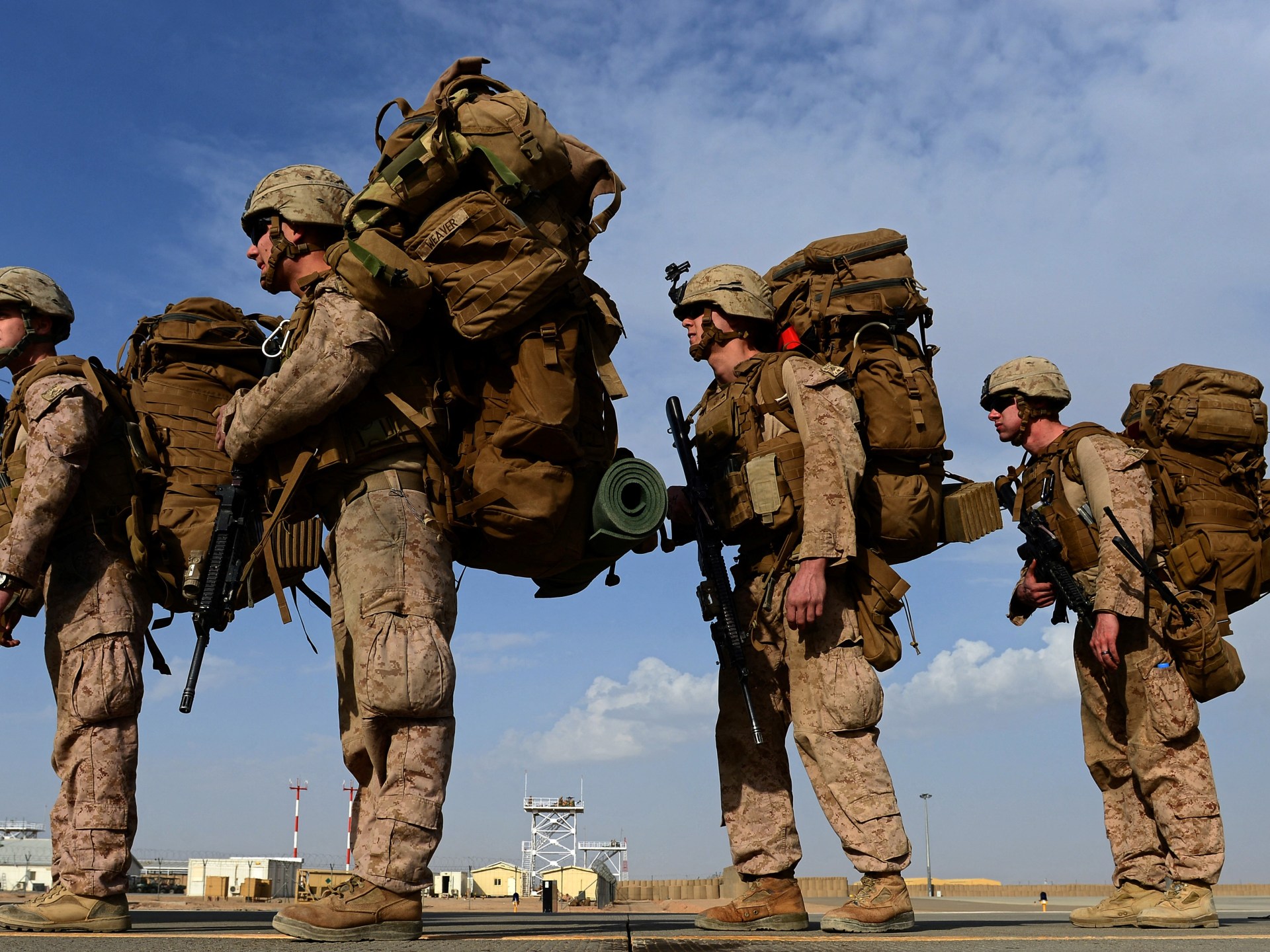 The US Marine Corps, or what is known as the "Marines", is a partially independent military force that falls under the supervision of the US Navy, but its command structure is similar to that of the army, except that it follows the "rule of three" and includes infantry forces. Navy and aircraft wings.

The Marines are divided into 4 groups: the active forces that do active combat, the headquarters command, the support organization that provides logistical support, and the marine corps reserve.

The Marines specialize in amphibious landings, such as those conducted against Japanese-held islands in the Pacific Ocean during World War II.

And the "Marines" forces, along with the Navy, are charged with defending US naval bases, seizing advanced "enemy" bases, and carrying out land and air operations for naval campaigns.

It is also responsible for providing security forces for US Navy installations on the ground, as well as US diplomatic missions in foreign countries.

The United States Marine Corps (Marines) was founded on November 10, 1775, when America's Continental Congress ordered two regiments of Marines to serve as landing troops with the fleet.

The Treaty of Paris in April 1783 ended the Revolutionary War, and with the sale of the last ships of the US Navy, the Continental Navy and Marines ceased to exist.

After the Revolutionary War and the formal re-establishment of the Marine Corps on July 11, 1798, the Marines took part in the Quasi-War with France (an undeclared war between France and the United States that lasted from 1798 to 1800), landed in Santo Domingo and participated in several Operations against the Barbary pirates along the "shores of Tripoli".

The US Marine Corps is organized under the National Security Act of 1947 and its amendments of 1952. The Corps Commander has equal status with members of the Joint Chiefs of Staff in all matters relating to the Corps.

The most prominent stations

The US Marines, or Marines, have participated in all the wars fought by the United States of America, and in most cases they have been at the forefront of combat or among the first to fight.

In addition, the Marines carried out more than 300 landings on foreign shores and participated in every major American naval operation since 1775, as well as naval operations during the War of 1812. They also participated in the defense of Washington at Bladensburg, Maryland, and fought alongside Andrew Jackson in The defeat of the British at New Orleans.

The decades after the War of 1812 saw the Marines protect American interests around the world, in the Caribbean, in the Falkland Islands and Sumatra and off the coast of West Africa, and also near their home country in operations against the Seminole Indians in Florida.

During World War I, the US Marine Corps distinguished itself on the battlefields of France, where the Fourth Marine Brigade was given the nickname "Devil Dogs" due to the heroic work they carried out in 1918 in Belleau Wood. , soissons, st. Michiel, Blanc Mont, and in the final attack of Meuse-Argonne.

During the two decades leading up to World War II, the Marine Corps began developing the doctrine, equipment, and organization needed for amphibious warfare.

The results of this effort were visible from the start of the war on Guadalcanal, then Bougainville, Tarawa, New Britain, Kwajalein and Eniwetok. Eniwetok, Saipan, Guam, Tinian, Peleliu, Iwo Jima, and Okinawa.

By the end of World War II in 1945, the Marine Corps had evolved to include 6 divisions, 5 air wings, and support forces.

So that its peak strength in World War II reached 485 thousand and 113 marines.

This war cost the Marines nearly 87,000 dead and wounded, while 82 Marines received the Medal of Honor.

The Vietnam War is the longest in the history of the US Marine Corps, during which it incurred a high cost, with more than 13,000 Marines killed and more than 88,000 wounded.

In the spring of 1975, the Marines evacuated US embassy staff, US citizens, and refugees in Phnom Penh, Cambodia, and Saigon, Republic of Vietnam.

In May of the same year, the Marines played a key role in rescuing the crew of the SS Mayaguez that had been captured off the coast of Cambodia.

In August 1990, the Iraqi invasion of Kuwait led to the largest movement of US Marines since World War II.

So, between August 1990 and January 1991, about 24 infantry battalions, 40 squadrons, and more than 92,000 marines were deployed in the Persian Gulf as part of Operation Desert Storm, which was launched on January 16, 1991, the day it began. It is the air campaign.

In December 1992, the Marines landed in Somalia, marking the beginning of a two-year humanitarian relief operation in that famine-stricken country.

And in another part of the world, Marine Corps aircraft supported the no-fly zone operation over Bosnia and Herzegovina.

During April 1994, the Marines evacuated American citizens from Rwanda after civil unrest in the country.

In the late 1990s, Marine Corps units deployed to several African countries, such as Liberia, the Central African Republic, the Democratic Republic of the Congo, and Eritrea, to provide security and assist in the evacuation of US citizens during periods of political and civil instability in these countries.

The Marines also carried out humanitarian and disaster relief operations during 1998 in Kenya, and in the Central American countries of Honduras, Nicaragua, El Salvador and Guatemala.

In 1999, naval units were deployed to Kosovo in support of Operation Allied Forces.

Shortly after the September 11, 2001, attacks on New York City and Washington, Marine units were deployed to the Arabian Sea, and in November the Marines established a forward operating base in southern Afghanistan.

The US Marine Expeditionary Force was among the first ground units to enter Iraq in late March 2003 as part of Operation Iraqi Freedom.

Warplanes and helicopters from the 3D Naval Air Wing provided close and continuous air support to coalition units as they pushed deep into Iraq.

The Marines perform a variety of special roles and missions, whether protecting US embassies abroad, recruiting the next generation of US Marines, or even serving the US Special Operations Command.

These skills are acquired by Marines who have demonstrated their exceptional ability to fight and win in the Basic Military Occupational Disciplines (MOS).

The following are the most important tasks of the Marines:

Enlistment duty is a vital mission in the Marine Corps, as it puts the Marine in a position to ensure that the Corps' standards remain high.

So that the Marines selected for enlistment bear the primary duty of screening, selecting, and preparing the next generation of Marines for the physical and mental training of these recruits.

Provide security for US embassies and consulates

The Marine Corps is the only military service charged with responsibility for providing security for US embassies and consulates around the world.

The security forces mission is among the most challenging for the Corps, and the Marines assigned to this mission must be highly trained in advanced security procedures, being assigned the responsibility of guarding and protecting key naval assets and U.S. Special Strategic Weapons.

Marines are always ready to stand on the front line in any battle.

The Marines that make up the Maritime Air-Ground Task Force provide a variety of response options, coordinating ground, air, logistics and cyber teams under a central command created to conduct the full range of operations.

Because of the flexibility, scalability, maneuverability, and adaptability of the Maritime Air-Surface Task Force's organizational structure, the Marine Corps remains battle-ready around the world at a moment's notice.

The smallest unit, with 2,200 Marines, it is versatile and responsive. It consists of a landing team battalion, a compound helicopter squadron, a combat logistics battalion, and is commanded by a colonel.

It includes between 4,000 and 16,000 Marines, and one of its objectives is to increase firepower and aviation reserves.

This brigade consists of a regiment-sized ground combat component, a group of aircraft, and a combat logistics regiment, and is commanded by a brigadier general.

The primary combat force for major operations, it includes between 46,000 and 90,000 Marines, of which there are currently 3 active MEFs (California, North Carolina, Japan).

The Marine Expeditionary Force - commanded by a lieutenant general - consists of a naval division, a naval aircraft wing, and a marine logistics group.

"Semper Fidelis" is a Latin word meaning "always faithful", and it is the motto of all US Marines, and means the collective and eternal commitment to the success of the battles fought by the Marines, as well as the unwavering loyalty of all members of the US Marine Corps.

Founded in 1883, this motto is used as a salutation, motivation, and expression uniting Marines past and present.

It also represents tradition and responsibility, beginning from the moment a young man or woman commits to earning the title of a US Marine.

Marines have flown many different flags since the American Revolution, but today's scarlet flag was chosen in 1939. Wherever it is displayed, whether at ceremonies or demonstrations, it is a distinctive symbol of the Marines' fighting spirit.

The flag features the eagle, globe and anchor emblems in gray and gold with an eagle holding a ribbon in its beak and bearing the motto "Semper Fidelis", meaning "always loyal".

Scarlet and gold were adopted as the official colors of the Corps in 1925, while the eagle, globe and anchor have appeared as part of the Marine Corps' icons since 1868.

The Marine Corps flag is flown at ceremonies and installations, and hung in the offices of the President of the United States, the Secretary of Defense, the Chief of the Navy, and the President and Vice Chairman of the Joint Chiefs of Staff.