“The most cherished desires always come true”: Santa Claus and the Snow Maiden spoke about life, work and dreams

What New Year's wishes will definitely come true? The most cherished and intimate - this is what Santa Claus from Veliky Ustyug says. And what is the secret of the eternal youth of the Ural Snow Maiden? According to her, in love. On the eve of the New Year, fairy tale characters responsible for the celebration in every Russian family told RT about their everyday life and work duties. In addition, they revealed the details of the work of the magic mail and their friendly team, named the names of the creators of their inimitable images, and also listed what modern children most often dream of when they are waiting for the New Year's miracle. 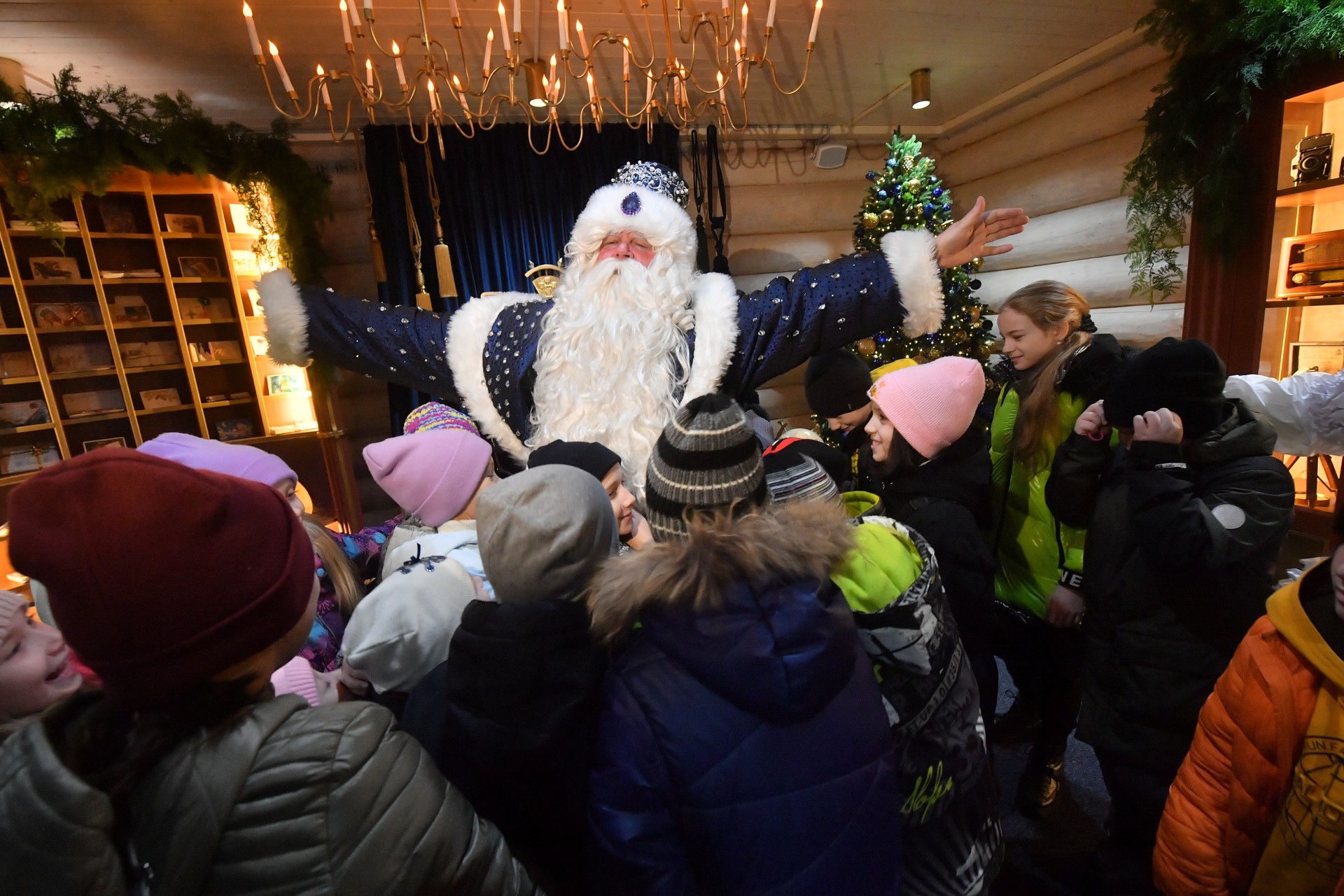 - There is very little left before one of the most beloved holidays by Russians.

Grandfather Frost, what would you wish the people of our country in the new year?

Santa Claus: I want to wish all Russians in the new year 2023 health, a peaceful sky over their heads, so that all people are happy and take care of their loved ones!

- 2022 was not an easy year, many people had desires that they want to fulfill especially strongly.

You are an expert in these matters, so advise what needs to be done so that the New Year's wish really comes true?

For greater effect, we usually burn notes with desires, wait for the chiming clock at midnight.

Santa Claus: The most cherished and innermost desires always come true, you just need to believe in it with all your heart and soul.

- I wonder if Santa Claus can fulfill any wish or is his capabilities still limited?

Santa Claus: The most important thing is that your wishes are good, and then I will try to do everything in my magical powers.

- Who does Santa Claus turn to to make his wish come true?

He also probably has some dreams, hopes for the next year, plans that he would like to bring to life?

Santa Claus: I make a wish with the onset of the New Year under the chiming clock.

And I wish peace on planet Earth, so that all people, young and old, be happy.

- And what about the Snow Maiden?

Does she also make wishes and receive gifts?

I, like everyone else, dream of the main thing: that as many children as possible be surrounded by the warmth and care of loving fathers and mothers, and every year I sincerely make this wish.

And Grandfather gives me gifts: either he decorates the kokoshnik with gems, or a mirror - you shouldn’t even dream of more.

So, now let's move on to the really important questions.

New Year is the time of gifts!

Tell us what do the children dream of getting for the holiday today - the main characters of the upcoming celebration?

But in the last letters more and more ask for peace.

By the way, about the letters.

has been operating for many years.

Tell me, do all the letters come from Russia or are there requests from other countries as well?

How many letters have you received in all the years of postal service?

Santa Claus: Letters come from all over the world.

Russian communities are scattered all over the world, they write to me from many countries: from China, America, from all countries of Europe and many others.

To date, more than 4.5 million letters have been received.

How many helpers does Santa Claus have?

Surely one person cannot cope with such a flow of messages ...

Santa Claus: There are a lot of helpers!

And what about the Snow Maiden?

Do not connect it to work with correspondence?

In general, it is interesting what exactly is included in her duties.

Snow Maiden: I answer letters from the guys, collect gifts, decorate the Christmas tree - I save the warmth of the New Year's miracle for everyone.

— Do you use any modern gadgets in your work?

Snow Maiden, you, as a representative of the modern young generation, are probably an expert in this.

Or do you prefer traditional methods?

Snow Maiden: Of course, we use gadgets.

Grandfather even has a selfie stick - the best New Year cards are created with its help.

In general, you know, it's great that you can ask Grandpa every day how he's doing.

Find out if everything is fine in the snowy forest, admire the new collection of snowflakes.

Grandfather Frost, of all the requests that you have received lately, which one touched you, made you laugh or touched more than others?

Santa Claus: Each letter is dear to me in its own way, because there are no identical letters.

If I single out someone, I can offend.

I am happy with all the news that comes to me in Veliky Ustyug to my fabulous post office.

- My colleagues and I noted, as it seems to us, some kind of injustice: when it comes to letters of desire, for the most part people turn to Santa Claus, but they

forget about the Snow Maiden.

This is understandable, because it is he, the main wizard, who is associated with the New Year.

Tell me, how does the Snow Maiden feel about this?

Is there envy and career struggle in the family?

Snow Maiden: You can't even imagine how many letters and beautiful postcards come.

The kids draw my portraits, make crafts and paint magical outfits themselves.

What kind of jealousy are we talking about?

“Alright then, let’s move on to New Year’s celebrations.

This holiday among the people, at least in Russia, is considered to be a family celebration.

How does the winter wizard celebrate this event?

I meet him in the circle of my friends, relatives, my fabulous retinue: Snowmen, brothers of 12 months, Shurshik, Zhitny Grandfather - everyone gathers near my patterned tower.

Together with children, with adults, we celebrate the New Year - our common favorite holiday.

- And what does Santa Claus have on the table on a festive evening?

How do you feel about the classic Olivier and strong drinks?

Santa Claus: My favorite drink is juniper kvass, and my favorite food is mushrooms, berries... Everything that grows in the forest.

- You have been in the position of Santa Claus for more than a dozen years.

Tell me, how did it happen that it was you who took this position?

This post is inherited from generation to generation, or Santa Clauses are chosen as presidents - in elections?

Santa Claus: How can you choose?

I was born this way.

I was also small, and from childhood they called me Santa Claus.

Many girls dream of becoming fairy princesses, including the Snow Maidens.

Snow Maiden, what advice can you give to your little fans?

Snow Maiden: If your heart is overflowing with magic, do not be sorry - give it back, this is the share of the magician.

Forgive me, of course, for the indiscreet question, but how old is the Snow Maiden?

For as long as we can remember, she has always looked simply stunning.

Snow Maiden: Grandfather gave me eternal youth, and mother gave me the warmth of the soul.

“Any creator will exclaim again: “The secret of youth is love.”

When you shine with love from the inside, then outside time has no power over you.

- Okay, let's move on from the nuances associated with work to rest.

New Year is the peak period of Santa Claus's workload.

Do you have a vacation or are you constantly busy and there is simply no time to relax?

Santa Claus: I don't even go to work.

I have New Year all year round.

One thing ends, another begins, so there is no time to be bored.

- We talked with colleagues in the editorial office, tried to guess what the Snow Maiden could do in her free time from New Year's duties.

To be honest, there aren't many options.

Can you lift the veil of secrecy?

Snow Maiden: In my free time, I write fairy tales and teach children.

In addition, I collect dried flowers for Dedushkina's feather bed, collect songs and stories, in a word - I fill my life with creativity.

- Many often pay attention to how great Santa Claus looks, especially when he goes out into the world.

This, by the way, applies not only to outfits, but also to the image as a whole - the state of the beard alone is worth something.

Tell us who is responsible for all your images?

Santa Claus: I have a big Fashion House - the place where outfits are sewn, of which I have more than forty!

They are created by Thread and Button, and the fashion designer invents these outfits for me.

- And how are things with the Snow Maiden in this respect?

Snow Maiden: I entrust my outfits to the best Grandfather's masters, and faithful helpers help me decorate them with gems - squirrels and hares.

The Russian Santa Claus lives in the city of Veliky Ustyug, Vologda Oblast, where his official residence is located.

You can contact Santa Claus in different ways, for example, you can write a letter to the New Year's wizard at the address: 162390, Russia, Vologda region, the city of Veliky Ustyug, "Mail of Santa Claus".

If you would like your letter to be answered, be sure to include a return address on the envelope.

Note that the residents of Moscow have another (extremely convenient) opportunity to turn to a wizard.

Special mailboxes can be recognized by the inscription "Moscow Estate of Father Frost" and New Year's decoration.

The employees of the parks will process the correspondence and transfer it to the recipient.

By the way, according to the results of last year's survey, most of all children wanted new toys for the New Year (23%).

The adults had other dreams.

So, judging by the data of another study, men and women most often wanted to receive money as a gift - 48 and 57%, respectively.

The second most popular gift among women was cosmetics and perfumery (41%), and among men, smart accessories (22%).

Most residents of Russia in 2021 were ready to spend no more than 5 thousand rubles on gifts for the holiday.