Doctors from Extremadura will also go on strike: "The situation is no different from that of Madrid"

Although there is still no chosen date due to the fact that union elections are scheduled for December 1, doctors in Extremadura have also decided to hang their... 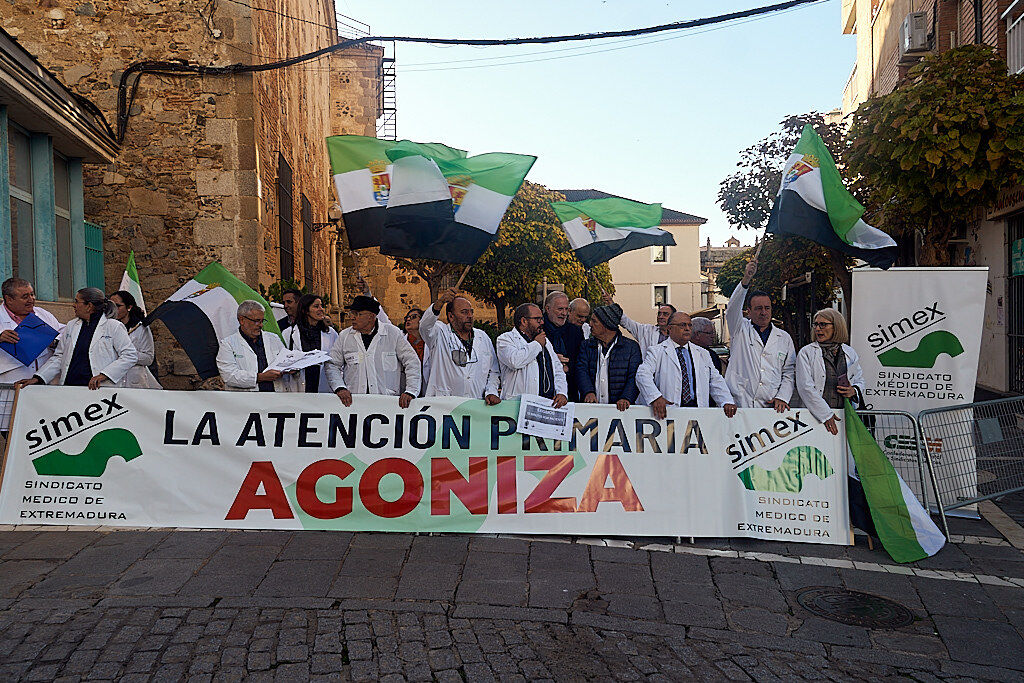 Although there is still no chosen date due to the fact that union elections are scheduled for December 1,

This is how the members of the

, have voted, who unanimously supported the call for a strike in the two provinces, Cáceres and Badajoz, after the last few weeks where they had already carried out several acts of protest at the gates of hospitals, with slogans such as "primary care is dying.

Doctors can no longer treat more patients per day.

», has assured the general secretary of Simex, María José Rodríguez, who has assured that the work overload leads to doctors having "the personal uncertainty" of thinking whether or not they were correct in the diagnosis.

In this way, they have announced that a strike committee will be set up to decide the dates of the strike and its duration.

and the "delicate" situation of public health in Extremadura, especially primary care.

due to the high incidence in consultations, especially due to the increase in respiratory conditions

, such as the flu or bronchiolitis, aside from of covid.

Simex is committed to the urgency of the call

Thus, they ensure that the Junta de Extremadura must take measures immediately, after the mobilizations at the doors of the centers have not led to an administrative reaction.

Specifically, they criticize the very high delay in patient appointments (up to two weeks in health centers for face-to-face appointments) and the staff in a critical situation due to their shortage while the vacancies are not unfilled.

"Some of the agendas are simply indecent -a situation that the population knows and suffers-, and that causes such a work overload that affects the occupational health of the doctors themselves, which in turn, causes sick leave, and which in turn are covered with the doctors who are left. And we remain like this in a dangerous spiral. In summary, Primary Care lacks time because there are not enough doctors to care for the population on time and on time".

There is also a shortage of doctors in Extremadura

The Extremaduran Minister of Health, José María Vergeles, estimated a few days ago the number of medical positions to be covered at 73 while the convening union brings it up to 200.

CSIF Extremadura has denounced that, globally, there are some 1,724 professionals missing sanitary, between doctors, nurses and paediatricians

Specifically, the region would need some 1,284 doctors right now, of which 400 would have to go to primary care and some 900 to hospitals and specialized care.

385 family doctors are missing according to the calculations of the Ministry of Health itself and the ratios of Extremadura and, in terms of paediatricians, some 55 would be needed

, the majority in rural areas where the places are not covered due to the fear of not getting transfers in many years.

that cannot be solved if more doctors are not hired, argues Emilia Montero, the CSIF's regional health officer, who has stressed that the staff shortage has been occurring since 2009, on especially in doctors and nurses, since the ratios in Extremadura "are below the ratios at a European level" and "we will never have an effective health system because we do not provide the staff and we do not have the necessary professionals".

", criticized the union official who pointed out that in Extremadura the health personnel "is burned out", and in the health centers they are dedicated to a bureaucracy "that exceeds them" and instead of having time to care for patients they dedicate themselves to paperwork, he denounces.