"Hunting and Equestrian" is soaring in its 20th year... between heritage and arts

Under the slogan "Sustainability and Heritage... in a Renewed Spirit", and with the participation of more than 900 companies and brands from 58 countries, the activities of the 19th International Hunting and Equestrian Exhibition (Abu Dhabi 2022) kicked off yesterday morning, which will continue until the second of next October. who organizes 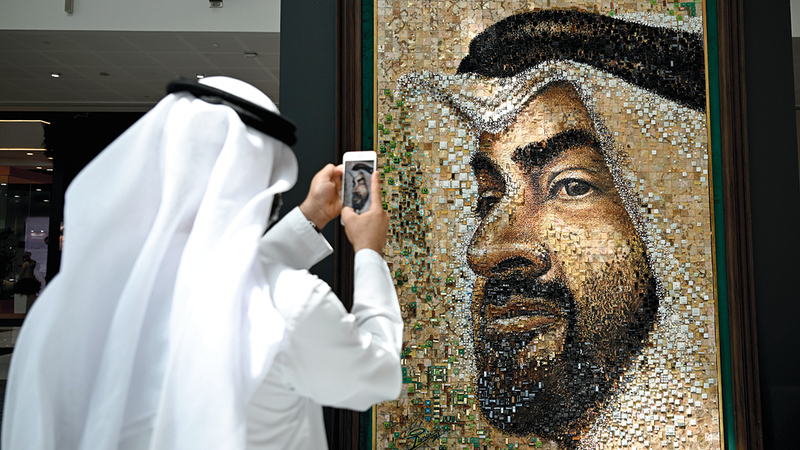 The exhibition kicks off with qualitative participation in Abu Dhabi

"Hunting and Equestrian" is soaring in its 20th year... between heritage and arts

Under the slogan "Sustainability and Heritage... in a Renewed Spirit", with the participation of more than 900 companies and brands from 58 countries, the activities of the 19th International Hunting and Equestrian Exhibition (Abu Dhabi 2022), which will continue until October 2, kicked off yesterday morning.

The exhibition, which is organized under the patronage of His Highness Sheikh Hamdan bin Zayed Al Nahyan, representative of the ruler in the Al Dhafra region, president of the Emirates Falconers Club, and celebrates in its current session its 20th year, has made a qualitative leap, as demonstrated by the numbers that have been achieved, as the number of exhibitors has multiplied more than 22 times, Its area expanded about 10 times.

The Gulf participation in this year's session is the largest in the history of the exhibition, reaching 43 entities, companies and brands, within the framework of the common interest of the Gulf Cooperation Council countries to preserve authentic heritage values ​​and ensure the sustainable use of wildlife resources.

In its current session, the exhibition is witnessing a prominent presence of arts in all its forms, whether through the arts and crafts sector, which witnesses the participation of more than 130 male and female artists, in order to enhance the cultural diversity of the exhibition and its activities, or through the pavilions of various institutions that used arts to inform the public of the heritage and history of the Emirates and to emphasize On the concepts of sustainability and environmental preservation.

The photography exhibition welcomed visitors to the event with the famous verses organized by the founding father, the late Sheikh Zayed bin Sultan Al Nahyan, may his soul rest in peace, on birds and hunting, and begin with: “Oh bird, I caught you knowingly… I have a few things from Al-Awadi.. Stand for them, may you not be disappointed.. I mean for their leader is my stubbornness.. Safety and hope in a look.”

The arts corner also included a painting entitled "Safety and Hope in a Look", by artist Rania Al-Buainy from "Art Gallery", by His Highness Sheikh Mohammed bin Zayed Al Nahyan, President of the State, the artist was inspired by the famous saying of His Highness: "Do not Chillon them", which was broadcast His Highness was crowned with security and safety in souls during the “Covid-19” pandemic, becoming the most influential figure in the time of the pandemic.

The painting is made of a large number of mosaic stones of different sizes and heights, gold leaf and high-quality acrylic colors on a background of Italian natural leather. Made of wood and a layer of royal velvet in green besides the wooden frame, the painting took three months to complete.

A huge sword inlaid with precious stones also caught the attention of the exhibition audience.

For its part, the National Archives and Library displayed in its pavilion a collection of rare photos from the trips of His Highness Sheikhs to hunting, hunting and horse racing, including a picture of His Highness Sheikh Mohamed bin Zayed Al Nahyan, President of the State, during his visit to Pakistan in 1974.

In addition to a picture of His Highness Sheikh Mohammed bin Rashid Al Maktoum, Vice President and Prime Minister of the UAE and Ruler of Dubai, during his participation in the third round of the Giants Endurance Race in 2009, and a picture of His Highness accompanied by His Highness Sheikh Hamdan bin Mohammed bin Rashid Al Maktoum, Crown Prince of Dubai and President The Executive Council, at the opening of the Dubai World Cup for Horses in 2011.

The pavilion included a set of pictures reflecting the love of the founding father, the late Sheikh Zayed bin Sultan Al Nahyan, may he rest in peace, for horses, falcons and hunting.

For its part, the Environment Agency - Abu Dhabi employed the arts to inform the public of its recently launched campaign under the title “Together towards Zero”, which focuses in particular on the policy of single-use plastics that was announced in 2020 and through which the ban on single-use plastic bags was implemented. At the emirate level last June, the authority displays artworks using plastic bags in its pavilion to educate the public about its danger.

Over the course of seven days, about 150 live activities, workshops, performances and interesting events are awaiting the exhibition's audience, in addition to educational activities, innovative competitions, and direct heritage and sports performances that attract everyone.

The largest in the region

The Abu Dhabi International Hunting and Equestrian Exhibition, the largest of its kind in the Middle East and Africa, leads hunting exhibitions worldwide in terms of the diversity of its sectors and the number of visitors, and plays an important role in attracting tourists from the GCC region and the world in general. One million and 750 thousand visitors, while its last session witnessed the visit of more than 105 thousand visitors from 120 nationalities.

• The exhibition is witnessing a prominent presence of arts in all its forms, whether through the arts and crafts sector.

• Gulf participation in this year's session is the largest in the history of the Abu Dhabi Hunting and Equestrian Exhibition.