Not even Greenland has been spared the rigors of summer: late melting worries scientists

This month, vast areas of the Greenland ice sheet have melted. At its peak, on day 3, the loss of ice was recorded in a territory of 592,000 kilometers... 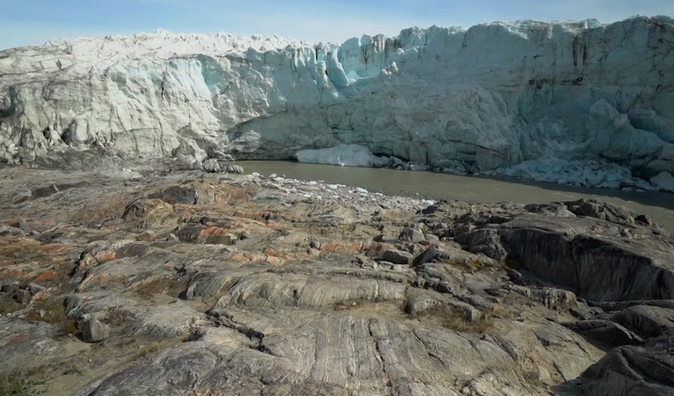 This month, vast areas of the Greenland ice sheet have melted.

At its peak, on the 3rd, the loss of ice was recorded in a territory of

and it is estimated that around

broke off and reached the sea.

That's the second-highest this summer and the highest on a September day since data began, according to NASA's Earth Observatory.

The scientists explain that the loss of so much ice at this time of year is an unusual phenomenon, since seasonal temperatures tend

to drop as the hours of sunlight decrease

However, this year an abnormally warm start to September has changed the trend.

Around 1.7 million square kilometers of Greenland's surface is covered in ice, the largest on the planet outside of Antarctica.

That layer gains mass as snow accumulates and loses it as it melts, contributed by runoff (water running across the surface),

As air and water temperatures have risen in recent decades, ice losses have outpaced gains, contributing to sea level rise.

Hence the importance of monitoring the melting season, which usually runs from May to early September.

When the icy mantle melts at the surface, some of the liquid water is retained in the porous snow on the ground, where it refreezes.

But another runs into the ocean, where it contributes to sea level rise.

the 2022 melt started off relatively slowly

, as below-average air temperatures in May and June culminated in the least amount of spring melt in a decade.

However, in mid-July the trend changed, favoring a large late thaw that conditions the loss of frozen mass, both now and in the future.

"When the melt season extends beyond its typical duration, the total amount of mass lost obviously increases," explains Lauren Andrews, a glaciologist with NASA's Office of Global Modeling and Assimilation.

"But what's not so obvious is that a longer melt season

and that may, in turn, impact the initial intensity of the subsequent melt season."

and forms crystals on the surface of the ice sheet.

These crystals can make it difficult for next year's meltwater to penetrate the surface, causing it to easily run off into the ocean.

The shrinking of the Greenland ice sheet is a major concern for climate scientists, as it is the main driver of global sea level rise.

the island loses about 250,000 million tons each year

, as a result of the collapse of glaciers and surface melting.

In August, a study published in

analyzed the imbalance that has been created in the Greenlandic ice in the last two decades.

And the conclusions are alarming.

According to the authors' calculations, even if the world stops burning fossil fuels today, the Greenland ice sheet will lose at least 110 billion tons in the coming decades, causing an average rise in sea level. worldwide of at least 27 centimeters.

"This is a conservative minimum;

realistically, that number is likely to double this century

," says Professor Jason Box of the National Geological Survey of Denmark and Greenland (GEUS), lead author of the study.

Additionally, the shape of the ice is changing to correct for the unavoidable ice loss of up to 3.3 percent of its current volume, creating an imbalance throughout the cycle.

"In the foreseeable scenario that global warming continues, the contribution of the Greenland ice sheet to sea level rise will continue to increase," explains Box.

"If we take 2012, which was one of extreme melting, and benchmark it for the end of this century, the Greenland ice sheet's committed mass loss

will double to 78 centimeters

The authors further stress the importance of estimating melting from

and observations, and not just relying on computer models of ice flow and climate interaction.

"To get those numbers, we had to drop the time factor in our calculation, but our observations suggest that most of the committed sea-level rise will occur this century."

The Greenland ice sheet is more sensitive to global warming and is disappearing faster than previously thought.

The degradation of the extensive ice sheet - which

covers 80% of the island's surface

- is one of the main factors contributing to the rise in sea level throughout the world, which makes the region one of the hottest thermometers in the world. relevant for measuring the evolution of climate change.

The 2019 summer season has already brought some of its strongest melting and mass loss.

In 2021, there were several massive melt events in July and August, and scientists observed rain for the first time at the Greenland Summit Station, a research center

where temperatures are rarely above the freezing point.

Now adds this summer's melting episode, which is among the 10 largest runoff events in Greenland and will

probably end up being the strongest recorded in September

Scientists warn that such events will become more frequent and severe as the region continues to warm, increasing Greenland's contribution to sea level rise.