Ana de Armas is Marilyn and Marilyn is any of us. Or vice versa. What Andrew Dominique achieves with his monumental and hypnotic portrait of a myth --not a character nor... 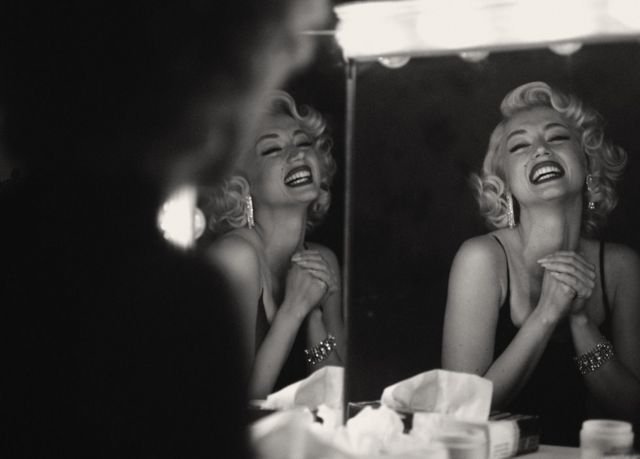 is Marilyn and Marilyn is any of us.

or, since we are exaggerating, by Ernst Cassirer in his

Or, why not, for any work of art with the spirit of the time that has touched him.

the representation (this is the idea) of almost everything we are, of the humiliations suffered, of the indecipherable longings, of legitimate and illegitimate desires (in addition to many of them illegal), of misery, of glory, of transcendence and chaos.

, tell yourself, is the movie of the year.

's novel of the same title ("I am a prisoner of this blonde mannequin with this face," it reads), the film is vocationally the opposite of a '

', the opposite of the devotion rendered to what the screen consumes and consumes us.

The camera stops at all times on her face, her body and much more inside the protagonist Ana de Armas and there she, unapologetically, stays to live.

The proposal, extreme to the point of revealing and immodest, does not so much seek to tell anything as to approach the intimacy not of anyone or anything but of one's own desire.

Marilyn as the naked embodiment of all aspirations,

fears, lies and errors of his time and of any time.

Marilyn as an empty name that is both strange and deeply intimate.

The question of who really was Marilyn Monroe?

' and before the viewer's gaze in a radical and even carnal questioning of himself: what do we see in her that so crudely defines us?

Andrew Dominik on 'Blonde': "Ana de Armas is the most desirable woman on the planet"

Andrew Dominik on 'Blonde': "Ana de Armas is the most desirable woman on the planet"

The tape, of course, stops at the most notable episodes of his life.

, so named because her mother admired the actresses Norma Talmadge and Jeane Harlow, is abandoned;

the young woman who is still called Norma and who aspires to be an actress is raped on a sofa in any of the studios that hire her;

and she then falls in love with the playwright

and also... And she triumphs.

And everyone admires her.

And she looks for her father.

Everything happens between vertigo and fever in an almost suicidal, sleepwalking exercise in tightrope walking.

' imitates or directly copies some of the mythical scenes of Marilyn herself and of the entire cinema and the screen witnesses the miracle of transubstantiation: Ana de Armas, we said, is already more Marilyn than Marilyn herself.

Ana de Armas in a moment of 'Blonde'.NETFLIX

If you want, and from the micropolitics of tiny but decisive gestures, '

' can count as a portrait of an industry, that of cinema, raised entirely on the need for deception, lies, the trade of desires, of desire of one's own desire.

Suddenly, what might seem like an archaeological analysis, since we are talking about the 1950s, becomes a perfect reflection of this time, here and now.

That the film is produced by

only adds perplexity to the proposal.

One step further, for what it has as a clear and savage explanation of horror and abuse, it is also worth as a stark satire of everything patriarchal, of everything macho, of everything that, despite everything, is still with us.

And given the case, '

' can pass as a merciless reflection on motherhood and abandonment.

However, and even if all of the above is true, the film, in its declared irresponsibility, aspires to more.

And that accurate and just claim is nothing more than nothing, the punctual description of the gap created by a name.

Behind Marilyn was never Norma Jeane.

It is no less relevant that this film has taken so long to see the light.

It has been ten years of production and a permanently delayed premiere with the producer and the director in a brawl and in full view of everyone.

The first described it as too explicit and demanded a radical cut.

The filmmaker fought back and demanded an all or nothing.

It would seem that all this theatrical online dispute is nothing more than an added chapter of the film itself.

Consistent with her in each of her inconsistencies.

In 1922, four years before Marilyn was born, James George Frazer had an insight.

What if all religions and beliefs were based on the same thing?

What if all the myths shared the same story, the same meat?

A myth, by definition, explains the world, gives it meaning.

A myth, to understand us, calms the vertigo of being alive.

However, and for the same reason, a myth can also be the perfect representation of its ugly condition as a mystery, as a fable to hide the obvious: the most elemental emptiness.

' is the perfect chronicle of this abyss.