Indonesian villagers exhume their dead from graves for a strange reason

A family on an Indonesian island poses for a photo next to their elderly relative who can no longer smile, while another family tries to dress one of their ancestors in a shirt and pants. 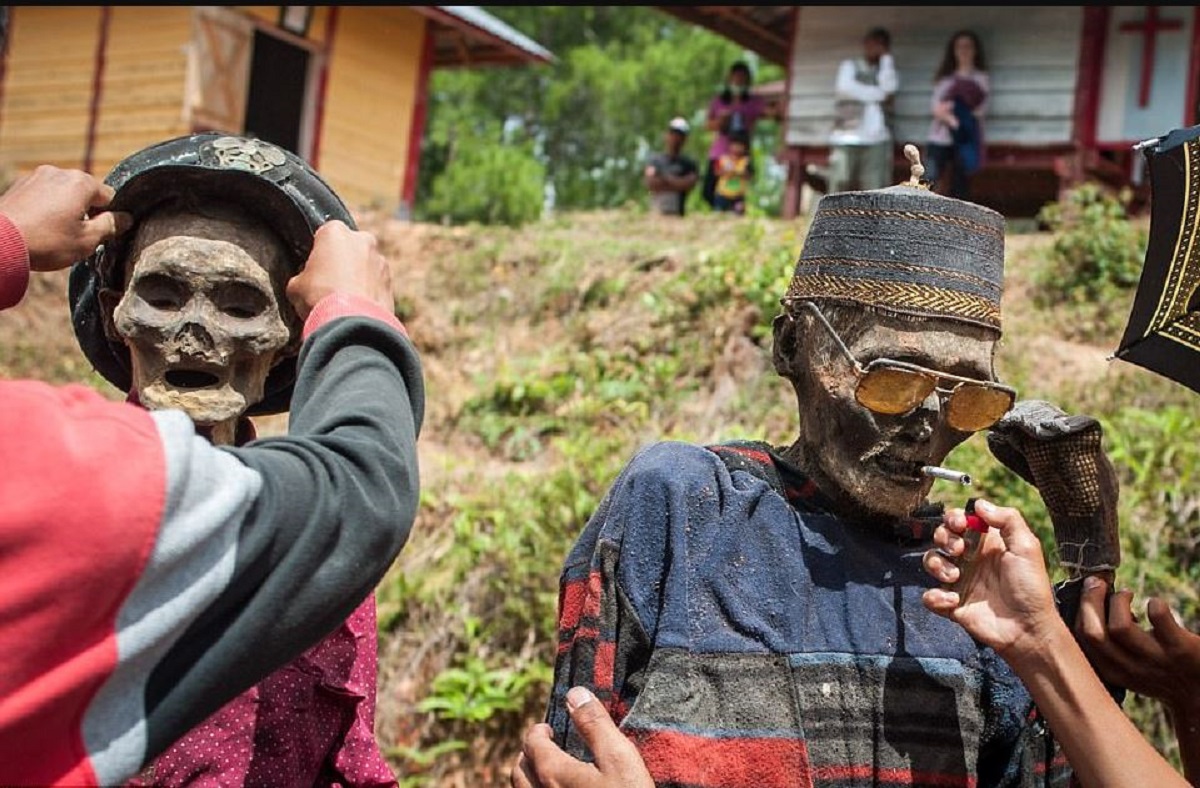 Indonesian villagers exhume their dead from graves for a strange reason

A family on an Indonesian island poses for a photo next to their elderly relative who can no longer smile, while another family tries to dress one of their ancestors in a shirt and pants.

It is not about two men who spend their last days in a nursing home, but who are in fact, simply put, virtually dead.

In this way, residents of two towns on the Indonesian island of Sulawesi celebrate a festival called "Manini" that lasts for days.

Hundreds of graves are being exhumed in the village of Turia in order for the relatives of the deceased to dress their bodies in clothes, in order to honor their souls and make offerings to them.

"We start by opening the tomb and cleaning it, as well as the space around it," Sole Tosai, a relative participating in the ceremony, told AFP.

"Then we dry the bodies in the sun before changing their clothes," he added.

People pull coffins containing the bodies of their loved ones from tombs dug in the mountain.

"The offerings symbolize the gratitude of children and grandchildren for the souls" of their deceased fathers and grandfathers, explained Turia village chief Rahman Bados.

He explained that they honor the souls of the dead, "so that they always bless the living (by providing) safety, peace and happiness for them."

One of the families gave the dead relative who had taken him out of the grave as an offering, which consisted of a cigarette, while another family put sunglasses on the nose of the deceased.

Some corpses remain relatively free from decomposition due to the mummification process, while others are transformed into mere skeletons.

The population of the Toraja ethnic group on the island of Sulawesi is about one million people.

These locals are not shy about talking about a mummified body, dressing it, combing their hair, or even taking pictures with a mummified relative.

Manini ceremonies are usually held in July and August, depending on the village, but may not necessarily be celebrated every year.

The Toraja believe that the souls of the dead remain on the earth before the funeral ceremonies and begin their journey to the land of the souls after these souls become immortal.

Families preserve the bodies of their deceased loved ones until they have enough money to hold a large funeral for them, and the deceased are embalmed in a way that uses natural materials such as acid vinegar and tea leaves.

But many families prefer to simplify things by injecting a solution of methanol into the bodies of their loved ones.

The exhumation of the bodies is a shocking and horrific sight for Western tourists.

The locals, on the other hand, are most happy by cleaning corpses, taking pictures and praying for the souls of the dead.

"Cadavers should be treated with the utmost respect during the Manini rites," said Rehman Bados.

"Family members honor their parents or grandparents, as disrespect has consequences," she added.