“Wait a minute, what about the bathhouse?”: The trailer for the film “The Irony of Fate in Hollywood” was released

The trailer for the American version of the film "The Irony of Fate, or Enjoy Your Bath!" has been released online. A remake of the 1970s cult film by Eldar Ryazanov received the Russian title Irony of Fate in Hollywood (originally About Fate). The plot revolves around Margot, who on the eve of her sister's wedding is left without a couple, but by a lucky chance she finds Griffin in her bedroom. Emma Roberts, Thomas Mann and Madeline Petsch starred in the film. The film was directed by Marius Weisberg and written by Tiffany Paulsen. 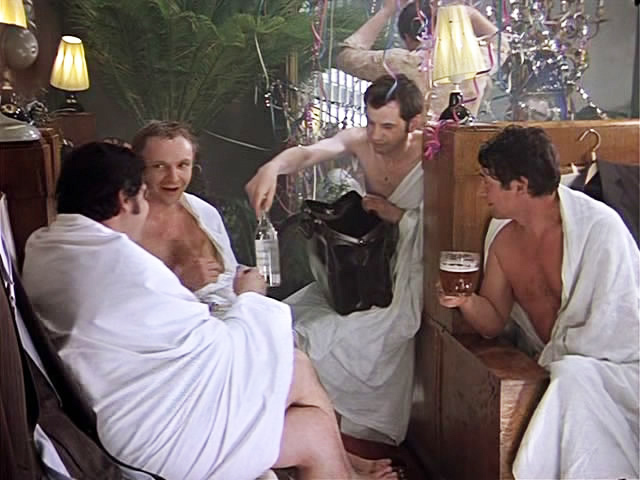 The trailer for the American remake of the cult Soviet film by Eldar Ryazanov "The Irony of Fate, or Enjoy Your Bath!"

- "The Irony of Fate in Hollywood."

The film was produced by MGM (Metro-Goldwyn-Mayer).

The plot of the Hollywood version, as well as the original play by Eldar Ryazanov and Emil Braginsky “Enjoy Your Bath!

or Once upon a New Year's Eve ... ”, revolves around a couple who, by the will of fate, meets in the girl’s house.

The trailer begins with parallel actions of the characters: having finished with the morning routine, Margot (Emma Roberts) and Griffin (Thomas Mann) go to meet their lovers in different cities.

If Griffin is caught off guard by a marriage proposal begging for his girlfriend, Madeleine Petsch, Margo is dumped by her boyfriend Kip (Lewis Tan) on the eve of her sister's wedding - she doesn't want to go there alone.

Puzzled by conflicting feelings and the impending marriage, Griffin leaves for Westwood instead of Norwood, and a frustrated Margot finds him on her bed.

The girl shares her disappointment with the man and asks him to match her at her sister's wedding.

Griffin reluctantly agrees and introduces himself to the girl's family as Kip at the event.

Griffin makes an impressive toast and confesses to Margot that he had never experienced anything like this before meeting her.

During a slow dance, a spark runs between the characters, but suddenly Kip himself comes to the celebration, who intends to return to his beloved.

He lashes out at Griffin.

When Griffin almost ruins the wedding cake, the guests scream in shock: “Not the cake!”.

“Did you ruin the cake?” Kip asks.

"No, he's intact," Griffin replies, practically burying his nose in the dessert, after which the fight continues.

The creators of the tape urge not to refuse a gift (love) when it is presented by the universe itself.

The film was directed by Marius Weisberg (TV series "Flying Crew", "Night Shift", "Love in the City", "Dirty Grandmother"), Tiffany Paulsen worked on the adaptation of the script.

She is the author of the script for the film "A Couple for the Holidays", where the main role was played by Emma Roberts.

The producers of the tape along with the director were Marina Bespalova, Sergey Bespalov, Vincent Newman, Sergey Livnev, Alexander Atanesyan and others.

The world premiere is scheduled for September 9, 2022, in Russia it will be shown a day earlier.

YouTube users have mostly reacted positively to the trailer.

They liked the chosen cast, but commentators are wondering how the plot of the remake will differ from the original.

One of them wrote that the key theme of the tape by Eldar Ryazanov was based on the fact that in the USSR everyone lived in the same houses and apartments, and even similar interiors (which in reality was not the case), which justified the confusion of the hero of the tape performed by Andrey Myagkov.

“I wonder how the same concept will work in the case of typical American cardboard houses,” the user wrote.

Another user noticed that the trailer does not show the bathhouse where the Soviet film "The Irony of Fate" begins.

“Wait a minute, but what about the bath?

The story begins with a scene in the bathhouse!

Maybe then they will shoot a sequel, ”he said.

Weisberg previously revealed that he had been working on the film for a long time before starting filming in the summer of 2021.

“I am very glad that our Soviet cultural heritage will now become the property of the whole world.

I have been working on this project for many years,” said the cinematographer.

The play “Enjoy Your Bath!

or Once upon a New Year's Eve ... " Eldar Ryazanov and Emil Braginsky was ignored by Moscow theaters, but was popular at the country's regional venues.

Ryazanov later adapted the play for the film known as The Irony of Fate, or Enjoy Your Bath!

Over time, watching the tape with the participation of Andrei Myagkov, Barbara Brylskaya and Yuri Yakovlev became a New Year's tradition, and phrases from it became winged.

In the center of the story of the picture is Zhenya Lukashin, who on December 31 goes to the bathhouse with friends.

There, the men drink heavily and go to the airport to see one of them off to Leningrad.

By mistake, instead of a friend, a sleeping Lukashin is on the plane.

In Leningrad, the hero gets into a taxi, gives his address and arrives at the same house as the one in which he lives in Moscow.

With his key, he opens the door of someone else's apartment and, without suspecting anything, goes to bed.

Soon the owner of the apartment comes and, having found a stranger in her house, makes a scandal.

Gradually, sympathy arises between the characters, and the acquaintance that began with a conflict develops into love.

In 2007, Timur Bekmambetov made a sequel to the film - “The Irony of Fate.

Continuation" with Konstantin Khabensky, Elizaveta Boyarskaya and Sergei Bezrukov in the roles.