Techno music festival in Zurich under the slogan "Think"

Hundreds of thousands danced yesterday to the rhythm of electronic techno music in Zurich during the first edition of the famous “Street Parade” festival in Switzerland’s largest city since the “Covid-19” pandemic. I 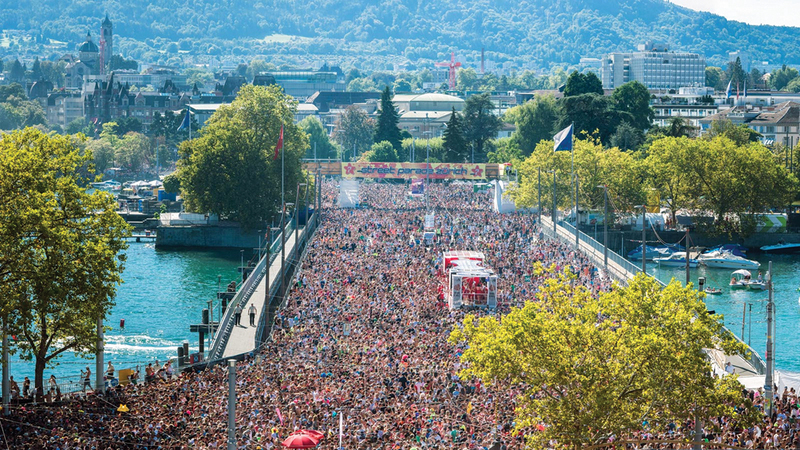 Techno music festival in Zurich under the slogan "Think"

Hundreds of thousands crowded along the lake that borders Zurich to attend the festival.

Hundreds of thousands of people danced yesterday to the rhythm of electronic techno music in Zurich during the first edition of the famous "Street Parade" festival in Switzerland's largest city since the "Covid-19" pandemic.

Everyone really wants to celebrate.

One can feel it.”

The last "Street Parade" festival was held in 2019, which attracted about 850,000 people, and organizers expect that this year between 750,000 to 1 million people will come to it.

The parade ran about two kilometres, along the same route as in previous years, along the lake that borders Zurich, a city known for its banking and insurance sector, but also for its counterculture.

Techno enthusiasts flocked to the shores of the lake, and many of them did not hesitate to enjoy snorkeling and swimming in its waters.

Zurich police recovered in the afternoon a man who drowned in an area near the place of the "Street Parade" residence, and it is not yet clear whether one of the participants in the party.

The show was based on 30 decorated "Love Mobiles" trucks carrying electronic music DJs and a number of revelers, and the crowds broke out on the track.

To these mobile music platforms, eight fixed stations were spread along the route, where multinational DJs broadcast the tunes that the Swiss economic capital danced to, including Adriatic, Anna Tour, Ida Ingberg, René Zonneveld and Sirita.

More than 200 DJs from all over the world participated, free of charge, in the revival of the 29th edition of Street Parade.

The organizers called this party, which takes place two years after the pandemic, the title “Think” (“Think”), with the aim of “inducing thinking.”

They said, "Whoever thinks acquires knowledge, and knowledge is the key to peaceful, tolerant and lasting coexistence."

The first “Street Parade” was held in Zurich in 1992, with the participation of only about 1,000 techno fans, and the authorities canceled the 2020 and 2021 editions due to the “Covid-19” pandemic.