Banned it in the air, at sea, above and under the ground.. Have the nuclear test ban treaties succeeded in defusing destructive wars?

The history of nuclear tests dates back to 1945 after America conducted its first nuclear test, and the Soviet Union joined it with its first test, “Joe 1” in 1949, announcing the beginning of a nuclear arms conflict, and the spark of the world’s threat of imminent nuclear war. 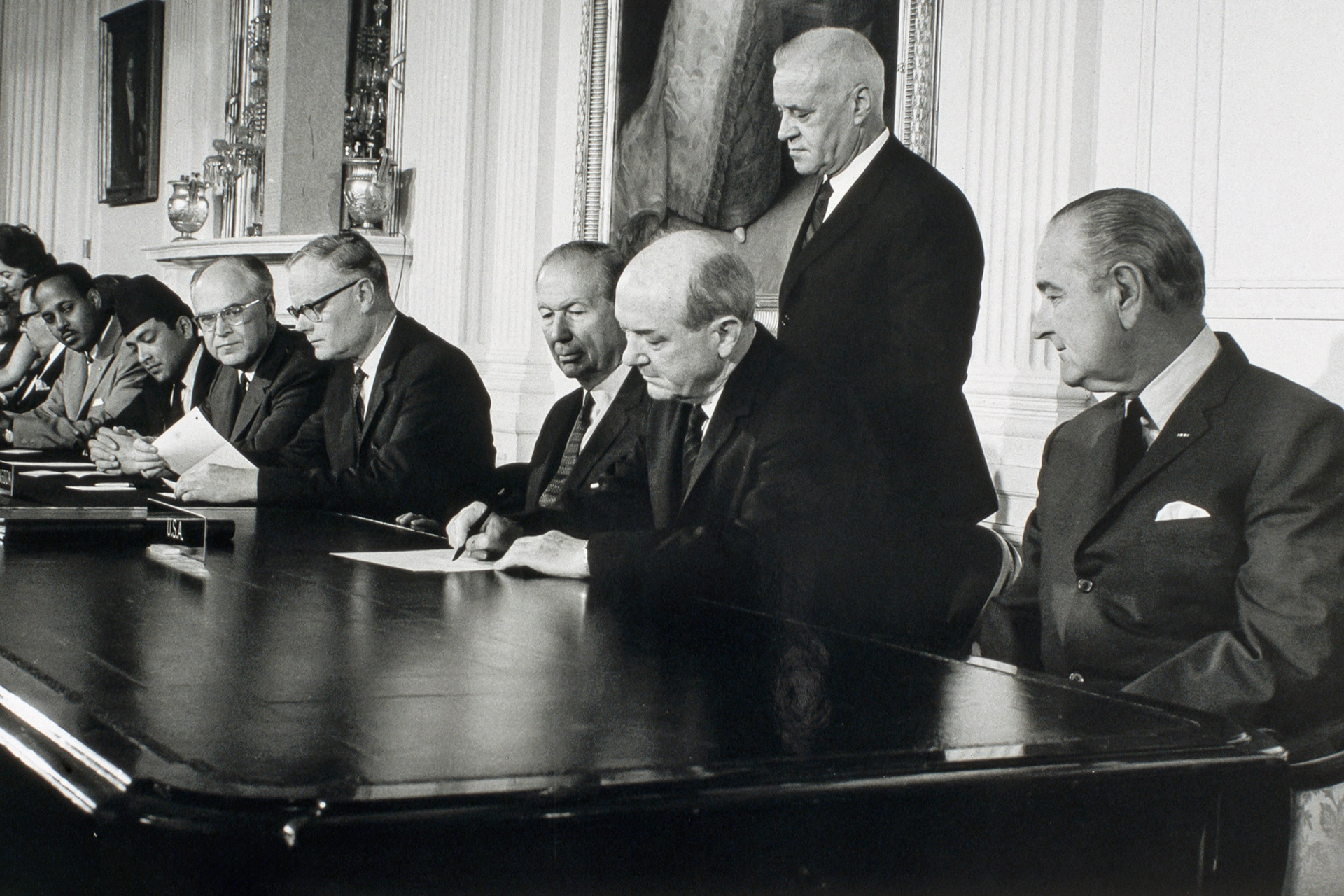 The history of nuclear tests dates back to 1945, when America conducted its first nuclear tests under the name "Manhattan Project", followed by the two nuclear bombs it dropped in Japan during World War II on the cities of Nagasaki and Hiroshima, and as soon as the war ended until the Soviet Union conducted its first test "Joe 1" in 1949 heralding the beginning of the nuclear arms struggle, which posed a global security threat for fear of an imminent nuclear war.

On August 5, 1963, the United States, Britain, Northern Ireland and the Soviet Union signed the Partial Nuclear Test Ban Treaty (also referred to as the Limited Test Ban Treaty) in Moscow, which was ratified by the US Senate on September 24, 1963, and entered into force on the 10 October of the same year.

The treaty banned nuclear weapons tests in the atmosphere, in outer space and under water.

It did not prevent states from practicing underground nuclear tests, but it prevented the spread of the effects of the experiments outside the territorial borders of the country carrying out the experiment.

The atomic bombings of Hiroshima and Nagasaki in 1945 marked the end of World War II and the beginning of the nuclear age, as a number of scientists from the United States of America, Great Britain and the Soviet Union developed tests of more lethal nuclear weapons.

The United States, the United Kingdom, Canada, France, and the Soviet Union met in May 1955 at the request of the United Nations Disarmament Commission to begin negotiations to end nuclear weapons testing.

A conflict ensued over inspections imposed to verify underground nuclear tests, which sowed panic in the Soviet Union that this investigation would expose Soviet plans for the number of nuclear weapons through espionage that might occur during the investigation.

During negotiations, the United States and the Soviet Union banned nuclear testing from November 1958 to September 1961 because scientists had found radioactive deposits in wheat and milk in the northern United States in 1959.

America's fears of the Soviet advance despite the ban

Former US President John F. Kennedy passed the Nuclear Weapon Test Ban Act in 1956, in a move he thought would prevent other countries from acquiring nuclear weapons.

As a first step toward nuclear disarmament, Kennedy pledged during his 1960 presidential campaign to halt testing in the air and to make a sustained diplomatic effort to pass the Test Ban Treaty before the start of underground testing.

But President Kennedy's political and military advisers insisted that he resume underground testing, fearing that the Soviet Union had continued its experiments and made advanced gains in nuclear technology.

In August 1961, the Soviet Union expressed its desire to resume atmospheric tests, and conducted 31 nuclear tests within 3 months after the announcement, during which the largest nuclear bomb in history was detonated 4,000 times more than the bomb dropped by the United States of America on Hiroshima.

Kennedy and Soviet Prime Minister Nikita Khrushchev sought to calm the two of them after the October 1962 Cold War Cuban missile crisis, which nearly led to a nuclear war.

Negotiations resumed in Moscow, during which they agreed to limit the scope of the test ban by eliminating secret tests and inspections from the agreement.

After 12 days of negotiations on July 25, 1963, the United States and the Soviet Union agreed to ban experiments in the atmosphere, space and underwater.

The Partial Test Ban Treaty was signed in Moscow on August 5, 1963, by the foreign ministers of the United States, the Soviet Union, and the United Kingdom.

The treaty consists of 5 articles, most notably:

After many unsuccessful negotiations on a comprehensive ban, the Comprehensive Nuclear-Test-Ban Treaty was established with the goal of banning nuclear explosions everywhere and preventing the development of nuclear weapons.

The treaty was adopted by the United Nations General Assembly, negotiated at the Conference on Disarmament in Geneva, and became a near-universal treaty after it was signed on September 24, 1996, by 182 countries and ratified by 154 countries (part-signatories did not ratify the treaty).

The treaty was not adopted in previous negotiations due to the failure of 44 countries with nuclear facilities to sign and ratify.

In August 2011, 35 of the countries that had previously abstained ratified the treaty, but 9 abstained: China, the Democratic People's Republic of Korea (North), Egypt, India, Indonesia, Iran, Israel, Pakistan, and the United States.

Based on the Comprehensive Nuclear-Test-Ban Treaty, a comprehensive verification system was established consisting of the International Monitoring System (IMS), the International Data Center (IDC) and On-Site Inspections (OSI), all of which aim to monitor the planet to monitor any nuclear explosions to share with Member States. Its Preparatory Committee has about 260 employees from member states.

The verification system works by:

There are several methods used by the inspectors, such as visual monitoring from helicopters, seismic measurements and environmental sampling from the site.

In 2008, the Comprehensive Nuclear-Test-Ban Treaty Organization conducted an on-site inspection simulation exercise in Kazakhstan, and in 2014 it carried out an integrated field exercise in Jordan.

The most prominent provisions of the Comprehensive Nuclear-Test-Ban Treaty:

This treaty consisted of 17 articles, a large part of which talks about the formation of the Comprehensive Nuclear-Test-Ban Treaty Organization, and details its structures, terms of reference and method of work.

The atmosphere was subjected to a number of nuclear explosions exceeding two thousand throughout the world between 1945 and 1996, with the United States and the Soviet Union alone causing more than 400 bombs.

In March 1954, the United States detonated the hydrogen bomb "Castle Bravo" in the Marshall Islands in the Pacific Ocean, which resulted in radioactive contamination affecting a number of local civilians on the islands, as well as American soldiers on Rungrik Atoll, and the Japanese fishing boat Lucky Dragon.

Underwater or near surface experiments

The United States was the first to carry out the underwater nuclear "Operation Crossroads" test in 1946 in the vicinity of the Marshall Islands, which it called the Pacific Proving Ground, in order to test the effects of nuclear weapons used against naval ships.

The United States also conducted an experiment "Operation Wigwam" in 1955, at a depth of 600 meters to determine the vulnerabilities of submarines to nuclear explosions.

Note that these nuclear tests lead to explosions that pollute ships and structures and harm humans, due to the huge quantities of water and radioactive steam caused by the explosions.

Underground experiments mean the explosions that take place at different depths under the surface of the earth, which is what countries tend to do often, as underground tests constituted 75% of the total nuclear explosions during the Cold War 1945-1989.

Of all the experiments it conducted, the United States carried out more than 800 underground experiments, while the Soviet Union conducted about 500 of its total experiments.

"Underground testing" was banned by the text of the Comprehensive Nuclear-Test-Ban Treaty.

The beginnings of nuclear testing in the United States were when it detonated its first atomic bomb in the Alamogordo desert in New Mexico on July 16, 1945, and the site was called "Trinity".

This first nuclear test was a test of scientific research conducted for years within the "Manhattan Project", which was worked on during World War II to manufacture nuclear weapons for the first time.

After the signing of the Comprehensive Ban Treaty:

After the signing of the Comprehensive Nuclear-Test-Ban Treaty by 183 countries and its ratification by 161 countries, nearly 6 nuclear tests were conducted, including: