Afghanistan: in Kabul, a demonstration of women violently dispersed by the Taliban

The Taliban violently dispersed, on Saturday Kabul, a gathering of women demonstrating for the right to work and education, nearly a year after the return to power of Islamists in Afghanistan.… 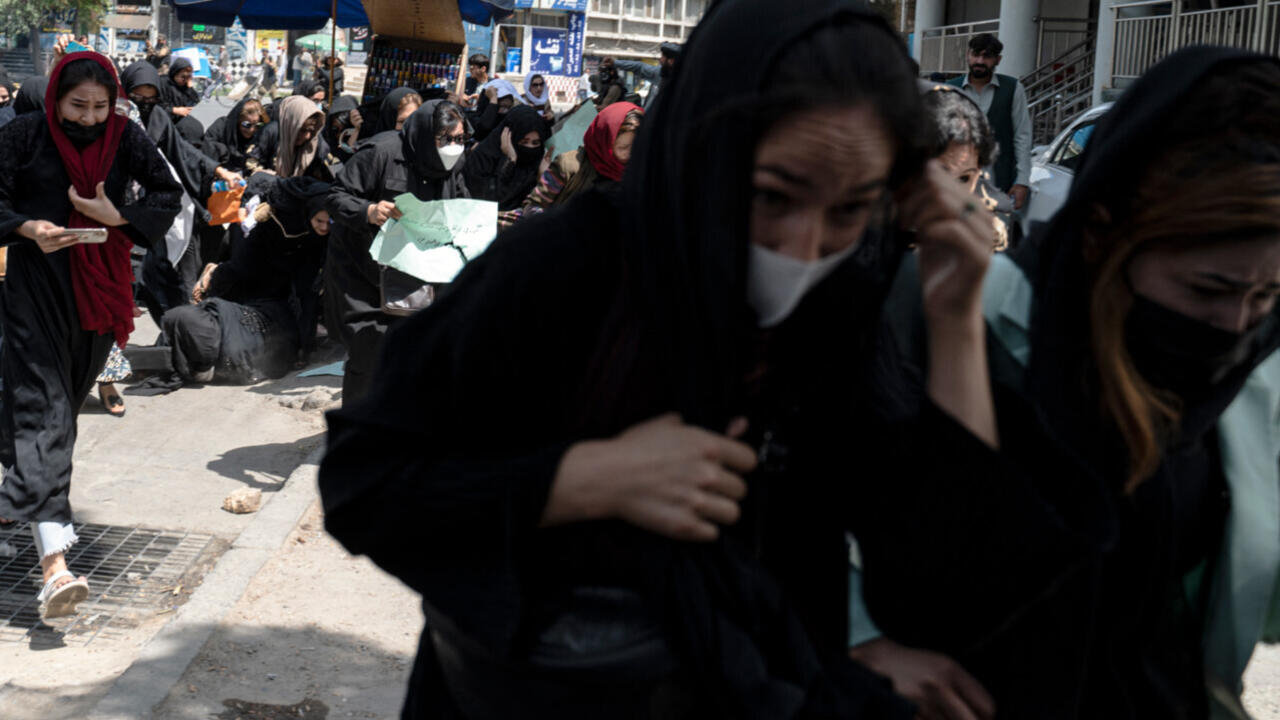 Shots in the air and blows with rifle butts: the Taliban violently dispersed, on Saturday August 13 in Kabul, a demonstration of women for the right to work and education, almost a year after the Islamists came to power in Afghanistan.

About 40 women chanting 'Bread, work and freedom' marched past the Ministry of Education before a group of Taliban fighters dispersed them with gunfire in the air, some five minutes into the march .

The demonstrators carried a banner on which could read: "August 15 is a black day", in reference to the date of the capture of Kabul in 2021 by the Taliban.

"Justice, justice. We are fed up with ignorance," they chanted before being violently dispersed.

Taliban in military uniform and armed with assault rifles blocked a crossroads in front of the demonstrators and started shooting in the air for long seconds.

One of them simulated a shot by aiming at the demonstrators, noted an AFP journalist.

Some protesters then took refuge in nearby shops where they were chased and beaten with rifle butts by the Taliban.

>> To read - Afghanistan: one year after the fall of Kabul, the Islamic State organization in ambush

One protester, Munisa Mubariz, said she intended to continue protesting for women's rights.

"We will not let the Taliban silence our voices. We will protest from our homes," she added.

Demonstrations by women to demand more rights have been increasingly rare in the capital, especially after the arrest at the beginning of the year of organizers of these rallies, some of whom were kept in detention for several weeks.

Since their return to power last August, fundamentalist Islamists have gradually eroded the freedoms won by women over the past twenty years since the fall of their previous regime (1996-2001).

They have imposed a series of restrictions on civil society, many of which are aimed at subjugating women to their fundamentalist conception of Islam.

They have largely excluded them from government jobs, restricted their right to travel, and banned girls from middle and high school.

The latest restriction dates back to early May, when the government issued an edict, endorsed by the Supreme Leader of the Taliban and Afghanistan, Hibatullah Akhundzada, making it compulsory for women to wear the full veil in public.

The Taliban specified that their preference was for the burqa, this integral veil most often blue and meshed at eye level, but that other types of veil revealing only the eyes would be tolerated.

They also felt that unless the women had a pressing reason to go out, it was "better for them to stay at home".

All these measures "describe a model of total sexual segregation and aim to make women invisible in society", declared in May in Kabul the UN special rapporteur for human rights in Afghanistan, Richard Bennett.

In a press release, the human rights association Human Rights Watch called on the Taliban on Thursday to "reverse their horrible and misogynistic decision" to ban education for women.

"It would send the message that the Taliban are ready to reconsider their most egregious actions," said Fereshta Abbasi, Afghanistan researcher at the NGO.

Over the past two decades, Afghan women had acquired new freedoms, returning to school or applying for jobs in all sectors of activity, even if the country remained socially conservative.