Israel's wars on Gaza..some of them began with assassinations, and one of them, the occupation launched more than 60,000 raids

Since 2008, Israel has launched a series of wars on the Gaza Strip under various pretexts. These wars left thousands of martyrs and wounded and extensive destruction, and each time the Palestinian factions responded by striking various Israeli targets. 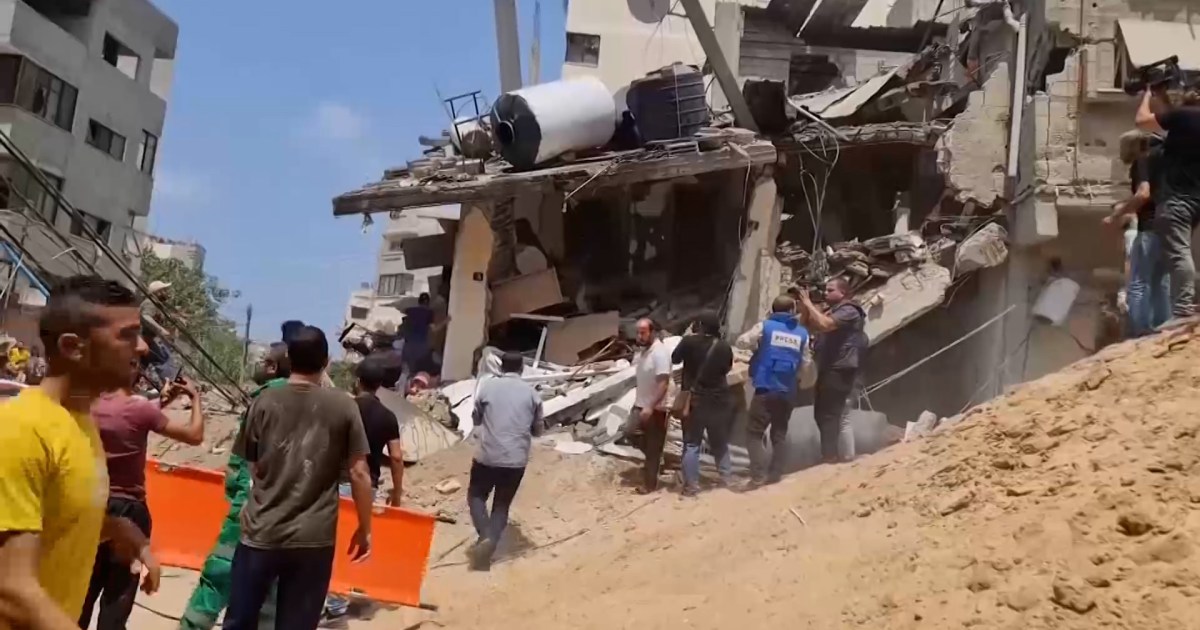 The Israeli occupation forces withdrew from the Gaza Strip in 2005 and evacuated the settlements that were in it, and since that withdrawal they have carried out military operations in the Strip from time to time, some of which turned into wars that lasted for weeks and left thousands of martyrs.

The Strip, which is the most densely populated area in the world, with about two million Palestinians inhabited, has been subjected to several Israeli attacks over the years, some of which assassinated the leaders of the Palestinian resistance movements, and some of them were seeking through them to recover their prisoners of the resistance, especially the soldier Gilad Shalit, who was captured Resistance in June 2006.

After the Islamic Resistance Movement (Hamas) took control of the Gaza Strip in June 2007, in September 2007 Israel declared Gaza a "hostile entity", and in October of the same year it imposed a total siege.

The following are the most prominent wars that Israel has waged on the Gaza Strip since its siege.

On December 27, 2008, Israel launched a war on the Gaza Strip, which it called "Operation Cast Lead", and the Palestinian resistance in the Strip responded with an operation called "The Furqan Battle."

The goal set by the occupation leadership for this war was to "end the rule of Hamas in the Gaza Strip", eliminate the Palestinian national resistance and prevent it from bombing Israel with missiles.

It was also intended to reach the place where the resistance is hiding the prisoner Gilad Shalit.

The Israeli aggression lasted 23 days, stopping on January 18, 2009, during which the occupation used internationally prohibited weapons such as white phosphorous and depleted uranium, and released more than a thousand tons of explosives.

The Palestinian resistance, in turn, targeted, in this war, the settlement envelope surrounding Gaza (about 17 kilometers) with about 750 missiles, some of which reached the cities of Ashdod and Beersheba for the first time.

More than 10,000 homes were completely or partially destroyed.

In turn, the occupation admitted killing 13 Israelis, including 10 soldiers, and wounding 300 others.

Israel called it the "pillar of clouds", and the Palestinian resistance responded to it with the Battle of the Shale Stones.

Its aim was to destroy the sites where the resistance movements store their rockets, and it launched by assassinating Israel Ahmed al-Jabari, the leader of the Izz al-Din al-Qassam Brigades, the military wing of Hamas.

About 180 Palestinians, including 42 children and 11 women, were killed in this aggression, and about 1,300 others were wounded, while 20 Israelis were killed and 625 others were injured, most of them out of panic, according to Israeli media.

The resistance factions responded with more than 1,500 missiles, some of which had a range of more than 80 kilometers, and some of them reached Tel Aviv and occupied Jerusalem for the first time, and some of them also targeted Israeli planes and warships.

On the Israeli side, two soldiers and 4 civilians were killed, and the occupation authorities estimated the losses incurred at more than one billion dollars.

On July 7, 2014, Israel launched an operation called "Protective Edge", and the resistance responded to it with the battle of "Eat Explosion." The confrontation lasted for 51 days, during which the occupation army launched more than 60,000 raids on the Gaza Strip.

The war erupted after Israel assassinated 6 members of the Hamas movement that it claimed were behind the kidnapping and killing of 3 settlers in the occupied West Bank, which Hamas denied. One of the reasons for this confrontation was that settlers kidnapped the Palestinian child, Muhammad Abu Khdeir, tortured and burned him.

The Israeli Prime Minister at the time, Benjamin Netanyahu, stated that the goal of the Israeli operation was to destroy the network of tunnels built by the resistance underground in Gaza, some of which extended under the border cover.

This war resulted in 2,322 martyrs and 11,000 wounded, and Israel committed massacres against 144 families, of which at least 3 people were killed, while 68 Israeli soldiers and 4 civilians were killed, in addition to one foreign worker, and 2,522 Israelis were wounded, including 740. militarily.

In this war, the Izz al-Din al-Qassam Brigades fired more than 8,000 missiles, some of which targeted for the first time the cities of Haifa, Tel Aviv and Jerusalem, and caused the suspension of flights at Tel Aviv airport.

The Palestinian resistance also launched drones into the Israeli airspace, which the occupation army's defense systems were unable to detect until after they penetrated the Israeli depth by more than 30 kilometers.

On July 20, 2014, the Al-Qassam Brigades announced the capture of the Israeli soldier, Shaul Aron, while responding to a ground incursion of the occupation army in the Shejaiya neighborhood, east of Gaza City.

On the morning of November 12, 2019, the people of Gaza woke up to the sound of an explosion of a missile launched from an Israeli drone. And led to the death of him and his wife.

Islamic Jihad responded to this assassination in an operation that lasted for a few days, dubbed “The Battle of the Dawn Cry,” during which hundreds of rockets were fired at Israeli sites and towns.

While Israel kept quiet about its human and material losses as a result of the resistance's missiles, its air raids resulted in the death of 34 Palestinians, and the wounding of more than 100 others, including Al-Quds Brigades activists, and large numbers of civilians.

Israel had accused Abu al-Atta - who was born in Gaza in 1977 and has 5 children - of being directly responsible for launching attacks against Israeli targets.

2021 The Guardian of the Fences / Jerusalem Sword

The battle of the "Sword of Jerusalem", which Israel called "the guard of the walls", broke out after settlers seized the homes of Jerusalemites in the Sheikh Jarrah neighborhood, as well as because of the Israeli forces' storming of the Al-Aqsa Mosque.

The Palestinian resistance fired more than 4,000 rockets at towns and cities in Israel, some of which had a range of more than 250 kilometers, and some of them targeted Ramon Airport, killing 12 Israelis and wounding about 330 others, according to Israeli sources.

This war resulted in about 250 Palestinian martyrs and more than 5,000 wounded. Israel also bombed several residential towers, and announced the destruction of about 100 kilometers of tunnels in Gaza.

The cease-fire was established after mediation, movements and international pressures.

On Friday, August 5, 2022, Israel assassinated the commander of the northern region of the Al-Quds Brigades (the military arm of the Islamic Jihad movement) in Gaza, as it targeted him with a drone inside an apartment in the "Palestine Tower" in the Rimal neighborhood.

The assassination came in light of Egypt's efforts to prevent the situation from deteriorating, following Israel's arrest of a prominent leader of the Islamic Jihad movement in Jenin in the West Bank, Bassam al-Saadi.

Israel called this operation “The Truthful Dawn,” and justified the choice of that name as “to confirm its focus on the jihad movement, which takes the black color as a slogan,” according to a statement by the occupation army.

The Islamic Jihad movement responded with an operation called "Unity of Squares", during which hundreds of rockets were fired at Israeli towns and cities. It said in a statement that it was a joint operation with the National Resistance Brigades, the Mujahideen Brigades and the Al-Aqsa Martyrs Brigades (the military wing of Fatah movement).

The Ministry of Health in the Gaza Strip reported that the number of martyrs in this war reached 24, including 6 children, while 203 were wounded, since the beginning of the Israeli raids on Gaza.