Israel slapped and Muslims were heartbroken.. What is the prayer that angered the occupation from the preacher of the Grand Mosque?

The preacher of the Grand Mosque, Sheikh Saleh bin Hamid, sparked controversy after being attacked by Israeli figures and an incitement campaign because of his last sermon at Friday prayer, in which he called for the Israeli occupation, so what are the details of the story? 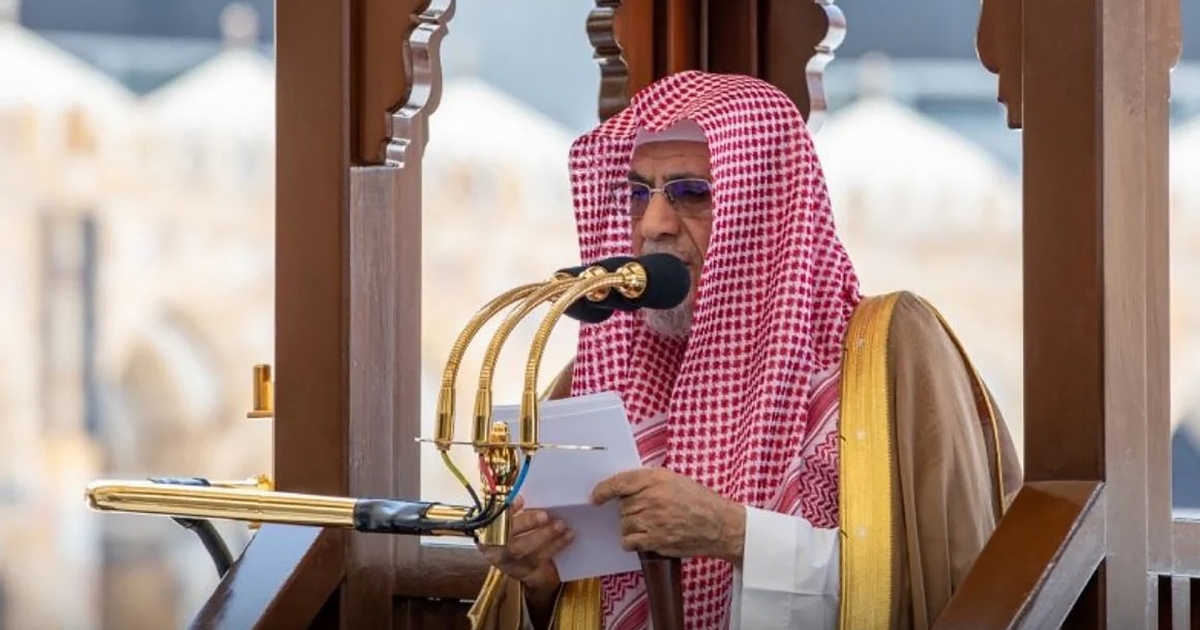 And the interactive bulletin "Nashratkoum" (04/8/2022) continued the solidarity of the communication platforms with a member of the Saudi Council of Senior Scholars, Sheikh Saleh bin Humaid, who had called for the Israeli occupation in the last Friday prayer sermon in the Great Mosque of Mecca, and said in his supplication, "Oh God, be upon you with the usurping and occupying Jews." They will not incapacitate you, O God, bring down upon them Your power that does not turn away from the criminal people.”

The supplication sparked anger in Israeli circles, as well as supportive of normalization and peace with Israel, and the Israeli journalist Eddie Cohen attacked Sheikh Bin Hamid and led a campaign of incitement against him.

Cohen said in a series of tweets, "I sent to the Israeli government agencies a translation of the sermon called Saleh, the inflammatory sermon against the Jews, as I sent it to American authorities. We will not allow anyone to insult us or the Israeli people. Whoever transgresses will pay the price no matter what."

And he added in another tweet, "We will not accept anything less than an official Saudi apology and prevent Saleh bin Abdullah bin Humaid from giving speeches."

Amal Al-Oufi wrote, "This is what upset Eddie Cohen! The general Jews themselves, and the Westerners among them in particular, are against Zionist extremism that does not cooperate to achieve true coexistence. Yes, we are all against any extremism from any of the components of this world. We are all against any intransigence that creates confusion in our land."

In response to the Israeli campaign of incitement, Saudi activists launched a campaign through the hashtag “We are all_Sheikh_bin_Hamid” in support of the preacher of the Great Mosque of Mecca, where tweeters in the Arab world also interacted with the campaign, and said that Sheikh Saleh bin Hamid slapped the Israeli occupation with his supplication during the Friday sermon, and added that the Israeli occupation also failed. In beautifying his image in front of most Arab peoples, despite his attempts to do so through normalization with some countries, as they put it.

Among the Saudi and Arab interactions on the hashtag “#We are all Sheikh_bin_Hamid”, the Grand Mufti of the Sultanate of Oman Sheikh Ahmed Al-Khalili said, “We were heartened by the supplication that the Imam of the Noble Sanctuary, our brother His Eminence Sheikh Saleh bin Abdullah bin Hamid, called to support the truth and defeat falsehood. believers."

Muhammad Al-Yahya tweeted, “The prayer of Sheikh Bin Hamid - may God protect him - on the Jews disturbed the Zionists more than he disturbed the Zionists. Praying for the Zionists occupying the holy lands of the Muslims is one of the most important duties, so that the Zionists, the Zionists and the printing press know that we pray for them before and after and during every prayer. The issue we have is an issue of religion and belief. ".

Activist Issa Abu Yamen tweeted, "The Zionists went crazy from Sheikh Saleh bin Hamid after his supplication in the last sermon of the Great Mosque of Mecca against the occupying Jews, and they incited against him and demanded his trial and punishment.

The “Saudis with Al-Aqsa” account also wrote, “All campaigns of the occupying entity to beautify its image and penetrate the heart of the Arab and Islamic peoples have failed miserably. The very great popular solidarity with the Imam of the Great Mosque of Mecca after his supplication against the occupying entity and the strong occupation attack on him proved that there is no future for the Zionists in the entire region.” ".

And the singer Anas Zuaiter said, "They scream in pain because they believed and were delusional that Muslims forgot the Al-Aqsa Mosque, the first of the two qiblahs, so Sheikh bin Hamid's prayer - may God protect him - was the slap that destroyed their illusions."

Activist Fahd Al-Atawi tweeted, "Thank you, people of Tuwaiq (meaning the great Saudi people) and to the Arab brothers who participated in the hashtag #We are all_Sheikh_bin_Hamid, which became a trend in Saudi Arabia 3 hours after its creation to respond to the Zionists of Jews and Arabs who tried to undermine Sheikh Dr. # Saleh_Ben_Hamid, thank you to everyone as big as the sky."