It's time to enjoy the planets at dawn

This weekend, shortly before sunrise, we can see a resplendent Venus accompanied by Mars, Jupiter and Saturn. The Moon will join the planetary quartet at... 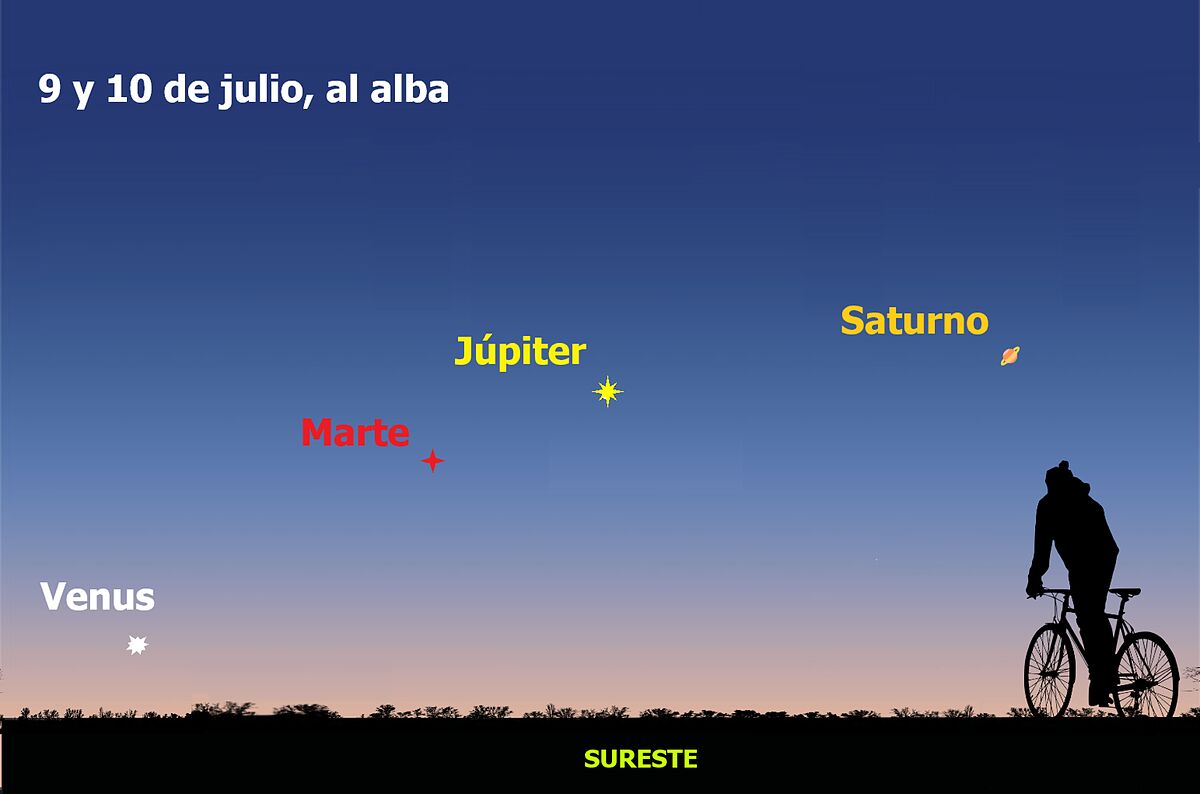 This weekend, shortly before sunrise, we can see a resplendent Venus accompanied by Mars, Jupiter and Saturn.

The Moon will join the planetary quartet in the middle of the month and form nice conjunctions with the giant planets.

The planets continue to brighten the sunrises in July.

As we are at the beginning of summer, you have to get up early to be able to see the four morning stars simultaneously, because the Sun rises very early.

The giant planets, however, are visible most of the night.

The first to rise is

You have to wait until 2:30 to see the reddish

come out , and at 5 in the morning

appears , which remains extremely bright until the lavish colors of dawn dim the brightness of the four stars and are camouflaged by daylight .

This leaves us barely an hour to observe the peculiar planetary quartet as a whole, well aligned along the imaginary line of the ecliptic.

A good time to enjoy the show is around 5:30

over the other planets with its extremely intense brightness.

This luminosity is due to its proximity to

But as Venus moves away, Mars gets closer.

The two rocky brothers of the Earth have been located at the same distance from our planet in the month of June.

This weekend the red planet is already much closer than Venus, 187 million kilometers from Earth.

Mars will continue to approach

until it reaches its closest approach

to Earth in early December

, then it will be only 80 million kilometers away, and that will be the best time to observe it.

The giant planets are much further away.

, twice the distance that separates us from Jupiter.

Jupiter's large size means that, despite its remoteness, its brightness is now only four times less than that of Venus.

However, Saturn and Mars shine much more discreetly: their intensities are about 50 times lower than that of Venus.

This weekend we have the

, it can be seen from dusk to 3 in the morning, approximately, when it hides in the west.

13th it will be in the full moon phase

, this first full moon of summer will happen while Selene is at its closest point to Earth, the perigee.

It is what some call

In this position, the Moon appears 14% larger in apparent diameter and 30% brighter than when it is in the opposite position (the apogee, the farthest from our planet).

In the middle of the month,

our satellite will be visible

for a few days, at dawn, near the planetary quartet just described.

The five stars will form beautiful pictures among the often fascinating colors of sunrises.

Remember that the wonderful rings that surround this giant planet are not visible to the naked eye.

You need a small telescope, at least 50 centimeters in diameter to be able to distinguish them.

At dawn on Tuesday the

new conjunction will take place, this time between the Moon and Jupiter

, which will be separated by just over two degrees.

You'll want to watch them around 5 a.m., when Mars will also be high above the horizon, a little further east and lower than Jupiter.

The scene takes place between the constellations

Pisces and the Whale

, so we can also locate

that was identified centuries ago and is now at its brightest.

Located about 420 light-years away, this red giant gives its name to a whole class of stars (Mira-type) that vary with very long periods, of the order of several years.

These summer nights are very short, but their pleasant temperatures in our latitudes invite you to stay up late and enjoy the skies.

Associations of amateur astronomers organize numerous observation sessions during the summer that can be used to see many more things than can be seen with the naked eye: for example, the rings of Saturn, which will be visible in all their splendor in the coming weeks, for the gas giant will be at opposition, with its disk fully illuminated, on August 14.