The covering of the Kaaba.. the adornment of the ancient house

The pilgrims of the Sacred House of God alone have the opportunity to see the Kaaba with two garments, the first when they reach Mecca before the eighth of Dhul Hijjah to perform the rites of Hajj, and the second when they depart from Mina to circumambulate the Kaaba. 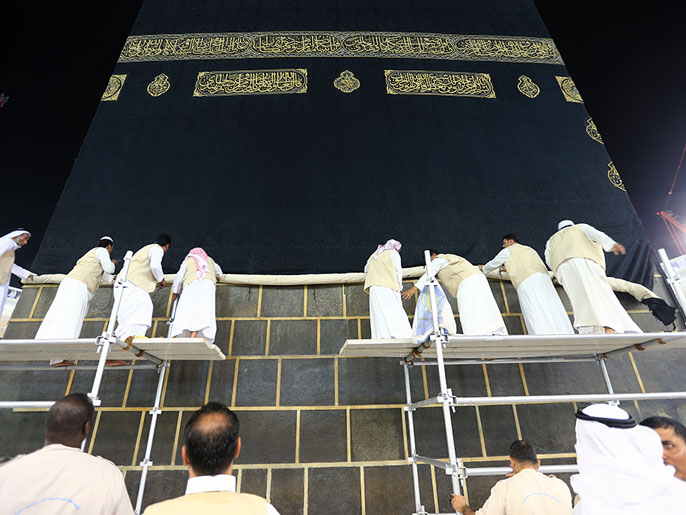 Only the pilgrims of the Sacred House of God have the opportunity to see the Kaaba with two garments, the first when they arrived in Makkah Al-Mukarramah before the eighth of Dhu Al-Hijjah to perform the rites of Hajj, and the second when they depart from Mina to circumambulate the Kaaba with the intention of completing the pillars of Hajj, where the Kaaba was decorated with its new gilded covering on the ninth of Dhu Hajj is a time when pilgrims are standing in Arafat.

The covering of the Kaaba is a story whose history is linked to the history of the Kaaba itself. Throughout history, the Arabs were racing to obtain this honor, and their wealthy, kings and common people used to cover it with everything that was possible, until Islam came and the Caliphs carried this covering and competed in its design, mastery of manufacture and the quality of its materials, in order to befit the status and greatness of the Kaaba in the hearts of Muslims.

The covering of the Kaaba before Islam was limited to palm wicker mats, then leather and Yemeni textiles were used in them. Since the time of their leader, Qusay bin Kilab, the Quraish imposed the covering on their tribes according to their wealth.

The Prophet, peace and blessings be upon him, and Abu Bakr Al-Siddiq covered the Kaaba with Yemeni clothes.

During the era of Omar Ibn Al-Khattab and Uthman Ibn Affan, may God be pleased with them, the Egyptian cloth known as Qabbati was used to cover it, which is a thin white garment.

The first to cover it with black silk was the Abbasid Caliph al-Mahdi, who ordered that only one garment be placed on it after the garment was piling on it until its buildings almost collapsed, and since his time the color of the outer covering of the Kaaba has settled on black.

And the responsibility for the covering of the Kaaba - after the weakness of the Abbasids - passed to the sultans of Egypt, especially the days of the Fatimids and then the Mamluks, then its matter was transferred to the Ottomans, to then return to the Egyptians during the days of the state of Muhammad Ali Pasha. In Cairo, it was carried from there annually to Mecca in a great celebration called the "Muhafaf".

Work in this factory stopped in 1926 when King Abdul Aziz covered the Kaaba with black silk and established a factory in Mecca to make this covering. Manual, dyeing, machine weaving, printing and inner curtain.

The Kiswa factory operates throughout the year to produce one livery, the production stages of which will be completed in 10 months, to begin preparations for the production of Kiswa next year.

It is delivered every year at the beginning of the month of Dhul-Hijjah to be transferred to the Kaaba.

The kiswa - whose dress is 14 meters high - consists of 5 pieces, each of which covers one side of the Kaaba, and the fifth piece is the curtain that is placed on the door of the Kaaba, which is made of gold.

Every year, 678 square meters of pure silk selected from the finest Italian and German silk called "Five A" (5A), after being treated and dyed black, are sewn and embroidered manually with silver wires coated with pure gold imported from Germany.

About 300 skilled and trained workers compete in their weaving, embroidering and supervising them, on a full time basis.

The covering includes a curtain for the door of the Kaaba, 4 pieces with Surat Al-Ikhlas written on it, a belt of the Kaaba that is approximately 45 meters long, 6 pieces under the belt embroidered with Quranic verses, in addition to 16 lamps and a gift piece.

The manufacture of the covering of the Kaaba goes through several stages: cleaning the silk from preservatives, then dyeing the imported raw silk in the form of a black paralysis for the outer covering, and green for the inner covering, and the weaving phase by converting this dyed paralysis into silk cloth prepared for embroidery and printing, or into silk cloth. The component of the upholstery fabric.

Then comes the stage of printing and embroidery, in which 69 workers embroider the printed lines on silk with prominent cotton, then wrap the cotton with gold threads with patience and patience, until the Kaaba belt comes out decorated with verses and names that have not changed for a long time.

Then comes the assembly stage, in which the silk cloth is installed to form the four sides of the cladding, then the belt and curtain pieces, which are more than 7 and a half meters long, are attached to it, hanging from a wall more than 14 meters high, above a door whose height does not exceed about 3 meters .

The curtain - which costs 20 million Saudi riyals annually (about $5.5 million) - bears at the bottom the gift piece on which the date of making the kiswa is recorded, which refers to the beginning of its manufacture, not to the time it was placed on the Kaaba. It also bears the name of the Saudi king who ordered its manufacture and gifted it to Kaaba.

Before installing the covering, the Kaaba is washed twice a year, in Sha’ban and Dhul-Hijjah. Zamzam water, oud oil and rose water are used to wash it. The four walls and the floor are washed and dried, then perfumed with precious oud oil, whose scent continues throughout the year.

After the washing process is over, the curtain is raised over the building in a ceremony attended by senior officials and invited visitors, and thus the Kaaba stands out at the dawn of each Eid al-Adha to receive pilgrims on the day of the greater Hajj with all its decorations.

And what joins the Kaaba and its historical belongings is the Antiquities Exhibition of the Two Holy Mosques, located next to the Kaaba Cloth Factory, in which the pieces, inscriptions and relics that have been collected over time, were dispensed with by deprivation - the two holiest mosques among Muslims - so it became a historical document and a witness to the development of their architecture.

This exhibition - which opened on 25 Shawwal 1420 1420 / 1025 AH (2000) - was held on a total area of ​​1200 square meters, and its exterior design took into account the combination of Islamic architectural style and the distinctive style of the architecture of the Grand Mosque.

Among the most historical value in the exhibition is a picture of the Ottoman Qur’an, and a stone pillar that was used as a pillar to build the Kaaba from the inside during the days of its renovation during the reign of Abdullah bin Al-Zubayr in the year 65 AH.

In addition, there is a wooden staircase that was used to reach the door of the Kaaba, dating back to the year 1240 AH, old doors, and a gutter dating back to 1956, in addition to a cabin that covered the shrine of Abraham, peace be upon him.

The number of its visitors is still steadily increasing, reaching millions.