Journal of Haiti and the Americas - Haiti: one year after the assassination of President Moise, the investigation in the United States (3/5)

All this week, on the occasion of the first anniversary of the assassination of Haitian President Jovenel Moïse, on July 7, 2021, we return every day to a particular aspect of this assassination... 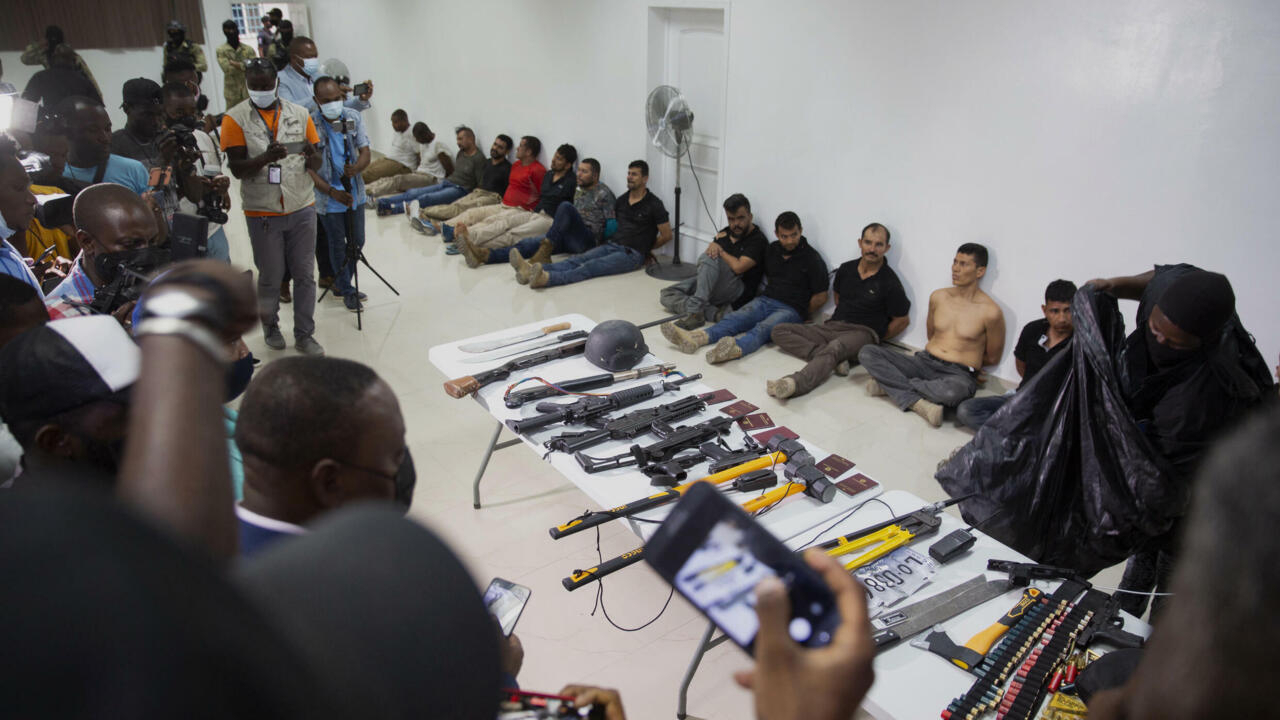 Haiti: one year after the assassination of President Moise, the investigation in the United States (3/5)

Alleged members of the commando who assassinated President Jovenel Moïse are presented to the press, July 8, 2021. ASSOCIATED PRESS - Odelyn Joseph

All this week, on the occasion of the first anniversary of the assassination of Haitian President Jovenel Moïse, on July 7, 2021, we come back every day to a particular aspect of this assassination and its consequences.

After the deterioration of the living conditions for the population, the investigation without investigation in Haiti, place today in the American shutter of the judicial investigations.

Three suspects are now in the hands of the United States justice system.

On the night of July 6 to 7, 2021, President Jovenel Moïse was assassinated in the bedroom of his private residence by an armed commando.

None of his guards had been injured.

What feed the doubts and speculation of Haitians on the sponsors and the performers of this crime, as noted in Gonaives

A case on which the American justice is investigating.

“The United States claims that the assassination of Jovenel Moïse was partly planned in South Florida.

This is why, under applicable US law and jurisdiction, the United States has decided to launch a federal investigation into the assassination of the Haitian President,”

She has been following the case from the start, has had access to the report of the Haitian judicial police.

An investigation which revealed the links between certain protagonists and American agencies:

in this complex affair, we discovered that there were individuals who are currently in prison but who, at some point, were in contact with an American agency.

Vincent Joseph, for example, is a former DEA informant.

Another man, Ortiz Pretel, a Colombian national, was at one point an FBI informant”,

“The United States is groping its way.

And so they try to prevent sensitive information from being made public”.

And the journalist concludes:

“I think that the American investigation could be the only way to shed light on this assassination.

In Haiti, judges are afraid to take up this case.

The U.S. investigation may provide Haitians with some answers, maybe not all, but at least some answers regarding this major crime.”

Colombia: Gustavo Petro reaches out to the ELN

President-elect Gustavo Petro, who will take office next month, wants to restart peace talks with the ELN, the National Liberation Army.

This guerrilla is considered the last active in the country, although some FARC dissidents have also taken up arms since the signing of the peace agreements in 2016. The end of violence in Colombia was one of the campaign promises of this first left-wing president in the country's history.

“The message that I am sending today, not only to the ELN but also to all the armed groups, is that the time for peace has come (....) What I am asking is a bilateral ceasefire,

Negotiations with the ELN were interrupted by his successor, the conservative Ivan Duque, after an attack on the police academy in Bogota, in which 22 cadets were killed in January 2019.

In Martinique, the city of Lamentin has decided to "give a second life" to its computer equipment.

Assassination of the Haitian president: who is John Joel Joseph, the ex-senator arrested in Jamaica?

Colombia: Gustavo Petro reaches out to the armed group ELN