'I say motorcycle, you say mommy': Rosalía begins her conquest of the world in Almería

At this point we can already say that 2022 will be remembered, among other things, for being the year in which Rosalía and her 'Motomami' impeccably consolidated hers... 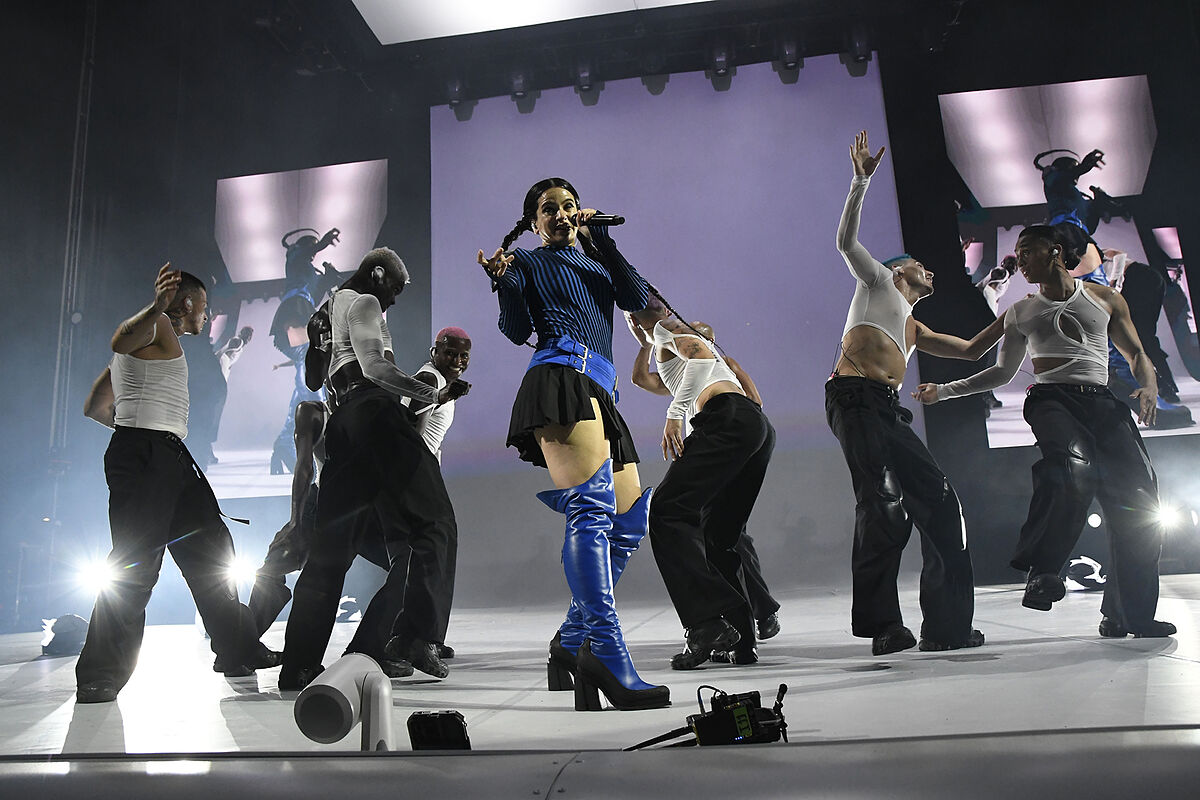 At this point we can already say that 2022 will be remembered, among other things, for being the year in which

It is not a hyperbole.

, the first stop of the highly anticipated

, everything was raw nerves, heat, anxiety, expectation and the happiness of being in an unrepeatable place and moment until the moment arrived: a thunderous engine roar was heard, the three magic words -Girl-what-say-you- and

they began to rumble in the stomach of the 12,000 souls gathered for the occasion, unleashing collective madness.

"Almería, this is so you never forget me," said the Catalan, in electric blue with a pleated miniskirt.

and when she hadn't given her time to recover, that spididic hymn to empowerment that is

, a calmer bachata, a little respite.

If Rosalía is famous for something, it is for being a perfectionist and that self-demand was noted in a perfectly calibrated show in which she and her voice are the absolute center.

The artist is accompanied by a group of eight dancers who, rather than performing a choreography, merge like a human mass around her, joining her gestures and the narrative of the songs, like a live video clip, recording her with mobile phones from various prospects.

Rosalía remembered the first time she came to Almería when she was eight years old.

. And it is also the land of

. It is a land of art and it is an honor to be here," he said before picking up the guitar and playing Dolerme, the song that he released in full confinement from the United States, to continue with

'From here you don't go out'

, one of his most flamenco songs from his first album,

, which he joined with

"If I say motorcycle, you say mommy" was the war cry-prelude to 'Motomami', with the dancers turned into a human motorcycle, and then with

, the public melted, of heat and emotion.

"Who has come with his bestie? And with his mommy? Me too !!!", he said before going down to the public recording everything with a mobile that was projected on the screens, unleashing hysteria.

Then he did something unexpected even coming from her: he sat in a barber's chair and while singing

, he cut the ends of his braids and undid them.

With his hair loose, he sat down at the piano and began to play, whistling, the melody of

The introspective moment came when he put on a black bata de cola several meters long, filling half the stage (the overhead shots are very good) to perform De plata.

And the alphabet was very funny because he left some letters.

"C for heat!", He blurted out some spontaneous.

The second part of the concert started with

, with a stellar zapateado, by a queen, and a reggaeton remix that raised the temperature several degrees:

fell and there the public it combusted.

"Being a popstar never lasts, but being a motomami does," read one of the many banners she read aloud.

And then when everyone was getting nervous that '

With scooters on stage and Rosalía riding one spinning around!!

"I see you all, everyone, everyone", she said very affectionately before singing

, with a voice that must have been heard in Roquetas de Mar. The farewell, with

, was an unforgettable final fireworks .

Fans of the artist from

had been queuing for two days at the entrance to the

to get a good seat at the first concert of the tour, quite a hero considering the heat that falls without mercy, day and night, over the Andalusian city.

There were still a few tickets available yesterday afternoon out of the 12,000 that the venue admits, an open-air space not far from the beach that was seething with anticipation last night, with thousands of motomamis with freshly manicured nails, two little bows and butterflies on the head, "together at night, put pa'l waste".

Almost a thousand days have passed since Rosalía took to the stage for the last time in Spain.

and a couple of months later, Covid closed everything and life stopped dead.

Rosalía, the world break caught her in the United States, where the superb Motomami was conceived (in this there is an overwhelming and unusual unanimity).

Three years and a pandemic later, in the summer of the Great Reunion, with the return to mega-concerts, festivals and long-awaited mass baths, Rosalía faces her third tour, the most anticipated, international and ambitious of her career: 46 concerts in 15 countries, only 12 of them in Spain, which will take her to

, where the tour will end on December 18.

It will double in four cities:

, the trendiest suburb of Los Angeles and has already sold out in a handful of cities.

Of the Spanish part of the tour, its four Andalusian dates stand out

What else can be said about Motomami, an unclassifiable album, complex and easy at the same time, so addictive that "even your mom hums it"?

Well, Rosalía has achieved several things that do not always necessarily go together: the popular acclaim of a public with a lot of accumulated desire to get excited and twerk and the blessing of the most specialized critics, surrendered to an album that is the wet dream of any specialist for his risk, his courage and his overwhelming mix of genres, ranging from reggaeton to flamenco, trap or ballad.

Another thing that Rosalía has shown is that, despite having spent months preparing the album in the United States, she can conquer the world singing in Spanish.

She has already done so, developing a new and very personal language that at times seems to come from the very future.

born in the Baix Llobregat was going to put an end to the Anglo-Saxon hegemony of world pop.