The Rituals of Hajj... The Journey of Forgiveable Sin from the Arrival Tawaf to the Farewell Tawaf

Hajj is the fifth pillar of Islam, and it is obligatory once in a lifetime for every sane adult Muslim if he is able to do so, i.e. if he has the financial and health ability to perform this obligatory duty. 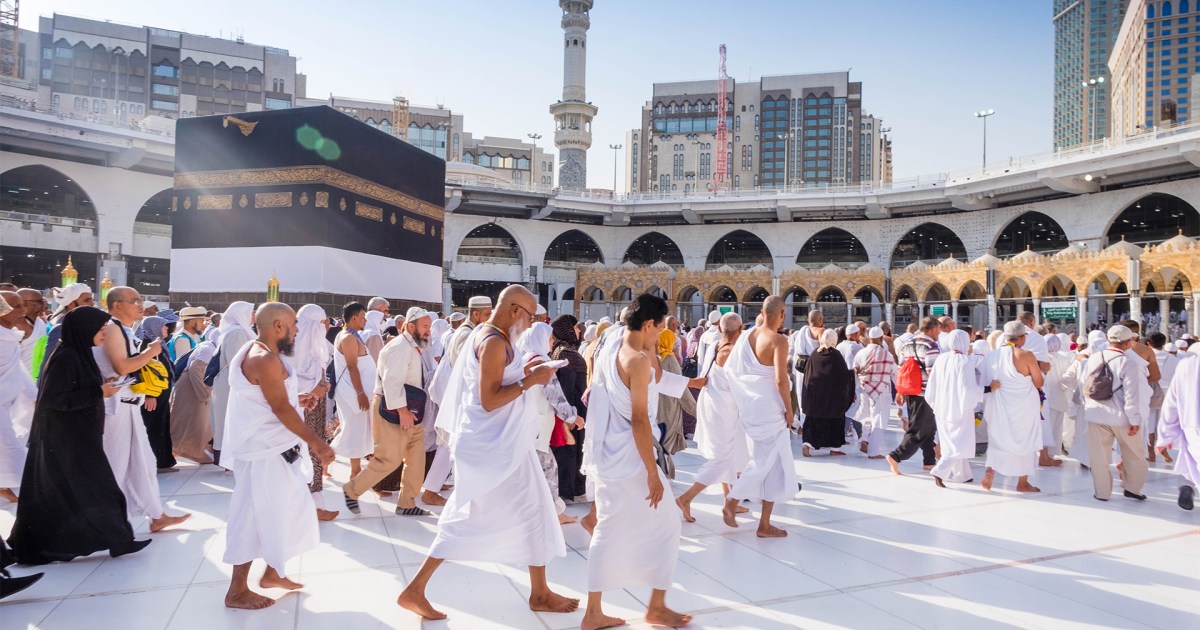 Hajj is the fifth pillar of Islam, and it is obligatory once in a lifetime for every sane adult Muslim if he is able to do so, i.e. if he has the financial and health ability to perform this obligatory duty.

In the following, we present the most important provisions that the pilgrim should know about the provisions of this great ritual.

They are of two types:

Ihram is performed at these times when traveling by land, but in the case of air travel, the Ihram can be worn before boarding the plane or on board and the Talbiyah when passing over the meeqat or adjacent to it.

Whoever is closer to Makkah al-Mukarramah than these times, then his miqat is his place of residence, and likewise the people of Mecca are forbidden from it.

Whoever is on his way to the right or to the left from these timings, he is forbidden when he is close to him.

Ihram and its types

Ihram is that a person intends to perform Hajj or Umrah or both, and to get rid of all appearances of dress and adornment, and suffice with wearing a loincloth that he wraps around the middle of his body and covering his private parts, and a robe that he puts on his shoulder and back, and it is permissible for him to wear a sandal that shows the feet and ankles.

This is for the man, while the woman intends to enter into Ihram and wears her usual clothing that covers her body, and exposes her face and hands.

It is desirable for the one who wants to enter Ihram to wash his hair, cut his hair, clip his nails and perfume, then put on Ihram clothes, even if the time is not the time when it is not forbidden to pray two units of prayer.

In Ihram, the prohibitions of Hajj or Umrah are prohibited for the Muhrim.

The person in ihraam has the right to choose between 3 types of rituals to intend one of them when entering ihraam, which are:

Prohibitions on the forbidden

Once in Ihram, a pilgrim is prohibited from the following:

The Hajj in Islam has 4 pillars. Whoever abandons one of them until its time has passed, then his Hajj is invalid:

Whoever neglects one of these duties, then he has to pay a ransom (slaughtering a sheep and the like), not eating from it or giving it as a gift, but giving it in charity.

And whoever left something from the Sunnah and what is recommended, his Hajj is valid and there is nothing on him.

The Muhrim performs Hajj alone or enjoying Umrah upon his arrival in Makkah Al-Mukarramah. He begins it by circumambulating the honorable Kaaba 7 rounds, during which he receives - in each round - the Black Stone, either by kissing if he can, or as a sign so that others do not crowd, and he says when meeting him: “In the name of God and God is great And he supplicates with whatever supplication he wills.

Upon completion of the circumambulation, the pilgrim performs two rak’ahs behind the Maqam Ibrahim, if possible, or in any other place within the Haram.

When he finishes the course of the quest, he goes to the barbers to shave his head or cut it short (and a woman is enough to take some of her hair), and thus a person completes his Umrah and breaks his Ihram.

These Umrah rituals are obligatory - and in the same manner - for the ordinary pilgrim outside the Hajj season.

On the eighth day of Dhul-Hijjah, which is called “the Day of Tarwiyah”, the pilgrim takes a bath and enters ihraam (if he is tamattu’, as for the singular and the qarir they remain in their first ihraam and do not break out of it) and he goes out to Mina and spends the night there and a lot of the Talbiyah, and he prays the five daily prayers, and he prays the four There are only two units of prayer (Zuhr, Asr, and Isha).

Standing in Arafat is the greatest pillar, and Hajj is not valid without it. It starts from the dawn of the ninth day of Dhul-Hijjah, and extends until the true dawn of the tenth day, during which the pilgrim increases in remembrance and supplication.

What is meant by standing here is attendance, witnesses, and staying in this place for a period of time, not necessarily standing on one’s feet.

The pilgrims pray in Arafat the noon and afternoon prayers short (only two units of prayer for each of them) and a combination of offerings, and a lot of supplications and remembrances until the time of sunset.

Muzdalifah is a place where the pilgrim prays Maghrib and Isha combined on the ninth of Dhul-Hijjah, as the Prophet, peace and blessings be upon him, did. He stays there or stays there for a period estimated by some scholars until midnight.

It is desirable for a pilgrim from Muzdalifah to pick up 7 pebbles for stoning Jamrat al-Aqaba at dawn on the tenth of Dhu al-Hijjah.

It is permissible to deputize for stoning for women who are unable to do so, whether they are the sick or the infirm.

The pilgrims head to Mina on the day of Eid, and throw 7 pebbles at Jamarat Al-Aqaba.

If he throws shaving or shortening his hair, and then the first dissolution takes place, it is permissible for him to do everything of the prohibitions of Ihram except for sexual intercourse.

Also among the acts of the Day of Sacrifice is for the pilgrim to sacrifice his gift (and what is most done now in order to facilitate the pilgrims is to pay the price of the sacrifice to one of the institutions approved by the Saudi authorities, and it spends on the needy), and he goes around the Kaaba and performs Tawaf al-Ifadah and runs between Safa and Marwa.

It is called Tawaf Al-Ifadah because it takes place after the Ifaadah of Arafat, and it is also called the Fard Tawaf.

It is not required to arrange these works in this way, but it is permissible to present and delay them.

The days of al-Tashreeq are called by this name because the meat in them is shone and distributed to the poor and needy.

The pilgrim must spend the night in Mina on these three nights (or the nights of 11 and 12 if he is in a hurry), and he stone the three Jamarat after noon each day until sunset, starting with the small, middle, and major.

After the pilgrim completes the rituals required of him on the days of Tashreeq (or in two days if he is in a hurry), he performs the farewell circumambulation and then leaves Mecca.

And this circumambulation falls for the menstruating and postpartum women.