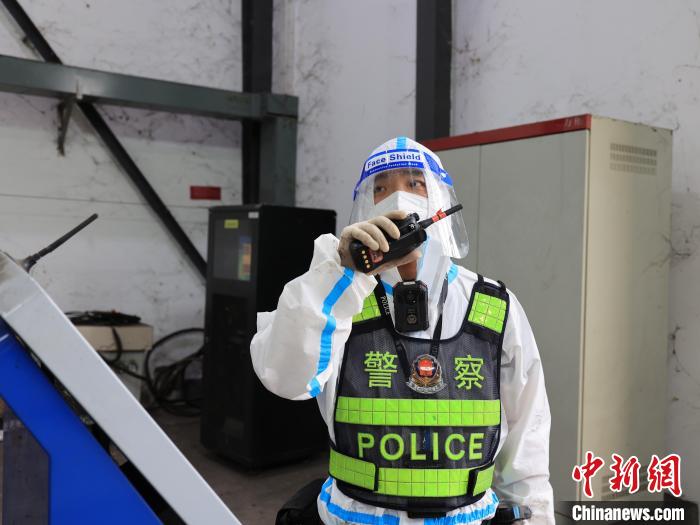 On the front line of the Yunnan border, a couple of "Generation Z" immigration management police officers set their wedding date on this day to commemorate their special fate.

Hu Yijiang and Zuo Liting are both immigration police officers at the Mangyan border checkpoint of the Yunnan Baoshan Border Management Detachment.

"Liting and I have known each other for a long time. Speaking of which, she is still my monitor." Hu Yijiang said.

In 2016, Hu Yijiang joined the army and came to the Mangyan border checkpoint. At that time, Zuo Liting was already a veteran of the station. Because of her outstanding performance in investigations, Zuo Liting was also responsible for teaching recruits in the unit to investigate techniques, tactics and methods.

Since then, Zuo Liting's careful and capable image has remained in Hu Yijiang's heart.

"Hu Yijiang has a sense of responsibility and is very responsible." Zuo Liting said with a smile that from the time he entered the police to the present, Hu Yijiang would write down the day's work in a small notebook every day after get off work.

For example, which contraband was seized, which parts of the car were easy to hide drugs, and a series of details such as the model, license plate, and color of the vehicle, he would record them one by one.

In his spare time, Hu Yijiang will search for relevant information such as vehicle structure and model through books and the Internet that are helpful for the investigation work, sum up experience from it, and continuously improve his investigation level and law enforcement quality.

On October 1, 2018, Hu Yijiang and Zuo Liting partnered to conduct an investigation in the lane of the Mangyan border checkpoint.

At 4 p.m. that day, when they checked an off-road vehicle, the panicked expression of the driver of the vehicle aroused Hu Yijiang's suspicion.

Through further inspection, Hu Yijiang seized 12 kilograms of drug heroin from the car, and was awarded second-class personal merit.

One day in March 2021, the Mangyan border checkpoint received a clue that there were suspected drug addicts staying in a hotel within its jurisdiction. Hu Yijiang and Zuo Liting dispatched the police together to carry out the mission.

Because it was the first time to participate in such a case, Zuo Liting was a little nervous when she came to the room where the suspicious person lived.

At this time, Hu Yijiang behind her patted her on the shoulder and said, "It's okay, little Zuo, I will protect you." It was this sentence that moved Zuo Liting, who had a good impression of Hu Yijiang.

After this mission, their feelings gradually warmed up and finally came together.

Although the two are in the same unit, they rarely meet each other because of their different tasks.

"In addition to eating every day, I can only wear protective clothing most of the time, and look at each other from a distance." Hu Yijiang said.

The heavy duty of the Mangyan border checkpoint makes the immigration management police stationed here busy every day. On a hot day with an average daily temperature of 38°C, they are wearing protective clothing and busy among the passing vehicles.

Due to work reasons, Hu Yijiang and Zuo Liting were close at hand, but they talked about the feeling of a long-distance relationship.

In March of this year, the parents of the two families came to the Mangyan border checkpoint to visit them without the knowledge of Hu Yijiang and Zuo Liting.

After seeing their working environment, Zuo Liting's father said that night, "You can't go wrong, you can endure hardship." At this meeting, the two parents set a wedding date for the two.

"It was originally planned to have a wedding in April this year, and we both were going to choose wedding dresses, but because we suddenly received the task of participating in the investigation competition, the wedding had to be pushed back." Zuo Liting recalled.

"Setting the wedding on the International Anti-Drug Day is also a temporary idea. Last month, Hu Yijiang asked me why we were together, and I blurted out 'It's because of the anti-drug'." Zuo Liting said.

Hu Yijiang tentatively told Zuo Liting that the wedding would be on the International Anti-Drug Day, but the two hit it off.

"As a dual-police family, we deeply love this glorious profession. For the sake of a drug-free world, I am willing to fight side by side with him at any time." Zuo Liting said that holding a wedding on the International Anti-Drug Day will become her One of the best memories in life.