The murderer of the student "Naira" during his trial: "I had revenge on her in my brain, but not in this way"!

The student, "Mohamed A.A.A.", accused of killing the Egyptian student Naira Ashraf in front of the gate of Mansoura University, said that he intended to take revenge on her, but not in the way that happened. was meeting the 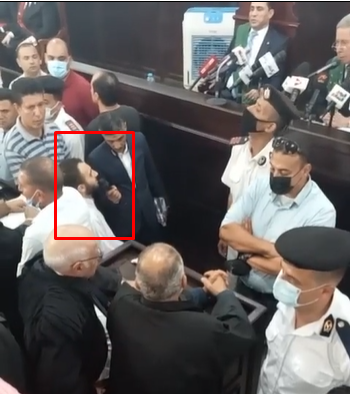 The murderer of the student "Naira" during his trial: "I had revenge on her in my brain, but not in this way"!

The student, "Mohammed A.A.", accused of killing the Egyptian student, Naira Ashraf, in front of the Mansoura University gate, said that he intended to take revenge on her, but not in the way that happened.

He explained that he bought the knife not to kill her, but to defend himself against her and the threats he received from her, explaining that he was meeting the victim in Cairo after getting to know her in the first year of study at the university.

He added that on one occasion he went to her family's home in Mahalla, after a problem occurred between him and Naira, explaining, "on the basis that her family knew the matter between us." However, according to the defendant's statements, only her mother recognized him when he met her before, while her father did not recognize him. He did not admit any relationship he had with his daughter, and he quarreled with him.

He indicated that after two weeks, he spoke with Naira, the victim, and about his previous request for her to stop working as a model, after he had provided her with her material needs and that she no longer needed anyone or work, according to the defendant's statements.

He added that he was surprised by a call from Naira threatening him and telling him that if he demanded anything from her, "men would answer from certain places, and if you asked for anything, I would work for you, settle and afflict you."

He added that the call lasted an hour and that he was shocked by her speech, which included a large amount of threats and insults.

Counselor Muhammad Labib, the first general attorney of the South Mansoura Public Prosecution, had referred the accused, "Mohamed A.A." to the competent criminal court in Case No. 1409 of 2022 misdemeanour, the first of Mansoura, because on June 20, 2022 in the department of the first department of Mansoura - Dakahlia Governorate , the victim killed Naira Ashraf Abdel Qader - deliberately with premeditation that Beit intended and resolved to kill her in retaliation for her refusal to associate with him and the failure of his multiple attempts to force her to do so.

The referral order included that the accused had drawn up a plan to kill her, in which he set the time for her to perform the exams at the end of the academic year at Mansoura University as a date to commit his crime, in order to be certain of her presence there. After her, he continued assaulting her with stabs and slitting her neck, intending to take her life during the attempts of some to defend her and threaten them, causing her the injuries described in the anatomical report, which claimed her life.