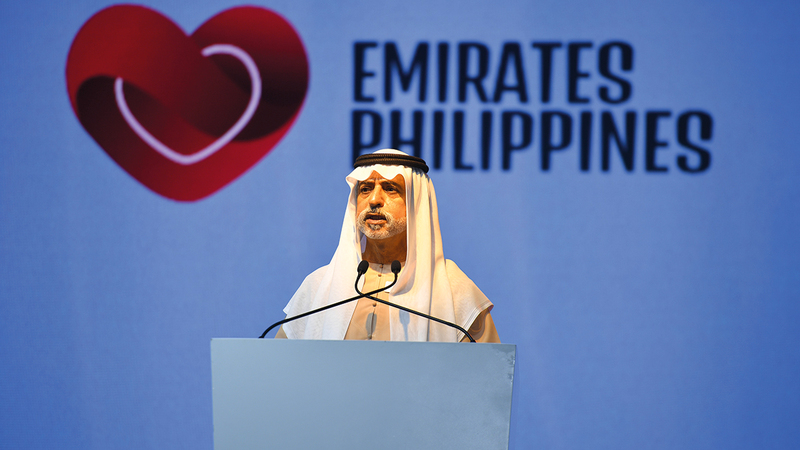 Sheikh Nahyan bin Mubarak Al Nahyan, Minister of Tolerance and Coexistence, stressed that the UAE society has today become a global model, embracing more than 200 different nationalities living on its good land. The Filipino community has played a vital role in the success of the UAE and its cultural diversity.”

This came during Sheikh Nahyan bin Mubarak's speech at a ceremonial meeting on the occasion of the 124th anniversary of the independence of the Republic of the Philippines, which was organized by the Philippine Business Council in the UAE, in cooperation with "The Emirates Loves the Philippines Page", and a number of strategic partners, and hosted by the Dubai World Trade Center, in The framework of the UAE’s efforts to spread the values ​​of tolerance and coexistence, which are an important component of the Emirati society.

The meeting was organized in cooperation with the Dubai Police and the Ministry of Foreign Affairs in the Philippines, within an atmosphere that reflected the distinguished relations at all levels between the two friendly countries, and formed a strengthening of the bonds of brotherhood and friendship between the two peoples, and the historical, human and social relations between them.

Sheikh Nahyan bin Mubarak expressed his happiness at attending the independence anniversary of a country friendly to the UAE, and congratulated the Philippines on the progress it has made in all fields, which strengthened its presence on the world stage.

He said: "The multiculturalism that our country embraces today reflects the wisdom of our nation's founder, the late Sheikh Zayed bin Sultan Al Nahyan, may he rest in peace, as the Emirati society today has become a global model, given that it embraces more than 200 different nationalities living on our good land.

His Highness Sheikh Mohamed bin Zayed Al Nahyan, President of the State, also adopted the vision of Sheikh Zayed, may God have mercy on him, by continuing to work to consolidate brotherly relations and the values ​​of coexistence and tolerance among peoples, and to promote a sound community environment that embraces all who live in it and supports their development and success. This reflects positively on the development process pursued by the UAE.”

An elite group of diplomatic, economic and social figures, as well as a number of businessmen, entrepreneurs, social media influencers, and families residing in the country were keen to attend the annual event, during which the Filipino community in the UAE celebrates the independence of their country.

For her part, the President of the Philippine Business Council in Dubai, Marian Celesta Carila, praised the keenness of the “UAE loves the Philippines” page to organize the celebration in partnership with the Philippine Business Council in Dubai, adding: “In addition to the feelings of joy that the celebration of this important national occasion, it highlights The celebration is the reality of friendship and the distinguished relations between the Emirati and Filipino peoples, and translates the high level of partnership that binds the two parties economically, commercially, culturally and socially, and all other areas of partnership and cooperation.”

The event was also considered as an affirmation of the feelings of gratitude of the Filipino community residing in the UAE to the government and people of the UAE, adding: “The celebration of the 124th anniversary of the independence of the Philippines is an occasion to renew the gratitude that every Filipino resident feels to the UAE leadership, government and people, for The hospitality, and the feelings of friendship, cordiality and distinguished relations that unite the people of the two friendly countries, as the UAE has spared no effort to enhance the well-being of all residents on its soil, including the Filipino community.”

For her part, the director of the "Emirates Loves the Philippines" project, Josie Conlo, said, "The UAE's hosting of this type of event, and presenting it in a joyful festive framework, will enhance the strength of relations, provide more opportunities for communication between the Filipino community themselves, and confirm the fact that The UAE is really the second home for all Filipinos residing on its land.

The celebration included many artistic and entertainment segments, which highlighted the peculiarity of Filipino art and culture, and added more joy to the audience.

It witnessed the participation of Filipino artist Carlo Aquino.

It also included distinguished artistic and performance shows, which were performed by artists from the UAE and the Philippines, and won the admiration of the audience.

"The UAE has spared no effort to promote the welfare of all residents on its land, including the Filipino community."

"The celebration confirms the fact that the UAE is really the second home for all Filipinos residing on its land."