Israel started building it 20 years ago.. What is the story of the apartheid wall?

A long wall built by Israel in the West Bank that runs along the 1948 border called the Green Line, is built of concrete with a height of between 4.5 and 9 meters in areas inhabited by Palestinians. 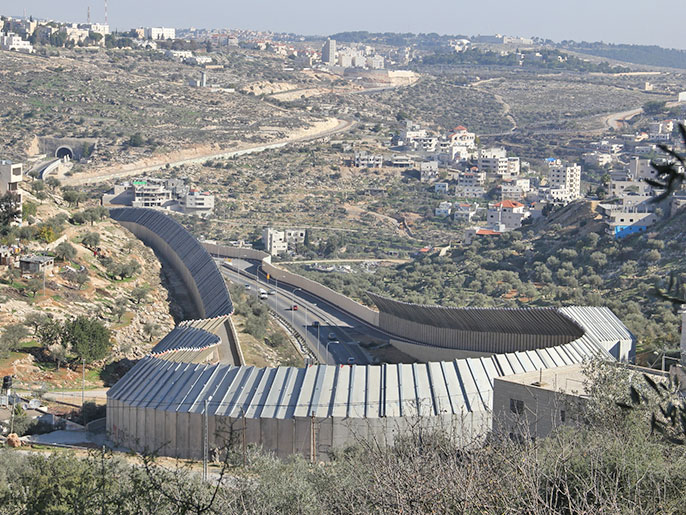 Twenty years ago from now, specifically on June 23, 2002, the government of former Israeli Prime Minister Ariel Sharon began building a separation wall in the West Bank near the Green Line, at a total cost of about $3.4 billion.

On July 9, 2004, the International Court of Justice in The Hague ruled that the separation wall was illegal, and demanded that Israel halt construction.

The long wall was intended to prevent Palestinian residents from entering Israel or nearby settlements, while Palestinians say it is an attempt to impede their lives and annex land from the West Bank to Israel.

There are strategic objectives behind Israel's construction of the separation wall in the occupied territories, as the separation wall is one of the manifestations of the expansionist Israeli policies that seek to control the largest area of ​​land and purify it from the Palestinian presence.

The security factor is one of the most important Israeli motives for establishing and erecting this separation wall, in an attempt by Israel to eliminate martyrdom operations and the various attacks of the Palestinian resistance factions.

The wall passes through inhabited and agricultural lands in the West Bank, and prevents Palestinians from accessing some local streets and some fields, and its path in the northern region isolates more than five thousand Palestinians in “closed” areas between the Green Line and the wall.

The Israeli authorities established a network of gates in the wall and a pass-permit system to move through it, and these systems proved ineffective in providing a normal life for the residents.

Israel relied on the construction of the separation wall on reinforced concrete, with a height ranging between 4.5 and 9 meters in areas inhabited by Palestinians, an electronic fence in sparsely populated areas, watchtowers equipped with cameras and sensors, and a dirt road covered with sand to detect traces.

The length of the wall in the occupied West Bank is 770 kilometers, including about 142 kilometers in the part surrounding Jerusalem, which is called the Jerusalem envelope, and the height of the wall reaches eight meters.

The ministry did not mention the percentage of completion of the 712 km network of cement walls, fences, trenches and closed military roads.

Based on figures published by the United Nations, 214 km of this network is still incomplete.

Upon completion, the wall will ensure the isolation of 733 square kilometers of Palestinian land in the occupied West Bank, or 12.9% of the area of ​​the West Bank.

The wall will also isolate about 200 square kilometers of the Jordan Valley, which is the food basket of Palestine and is located on the eastern side of Palestine.

Although 15% of the sections of the wall extend over the 1948 borders, the rest is built according to Israeli maps in the Palestinian territories occupied in 1967.

Through its path, the wall touches eight Palestinian governorates, comprising 180 communities, and reports indicate that it will affect the lives of 210,000 Palestinians living in 67 villages and cities in the West Bank, including occupied East Jerusalem.

It also enters the wall 22 kilometers deep into the West Bank, and isolates more than 13 communities with 11,700 Palestinians who will find themselves imprisoned in the area between the Green Line and the separation wall.

The wall will create a new security belt area, and make 19 population centers inhabited by 128 thousand and five hundred Palestinians besieged in isolated areas and outposts.

It will separate 72,200 Palestinians from 36 communities east of the wall from their fields and agricultural land to the west of it.

In total, the wall will devour about 46% of the area of ​​the West Bank, which amounts to five thousand eight hundred square kilometers, in addition to isolating the city of Jerusalem demographically and geographically from the cities and villages of the West Bank.

The wall will violate the basic rights of about one million Palestinians in the occupied territories, as thousands of them will be forced to obtain special permits from the occupation, to allow them to continue living and move between their homes on the one hand and their lands on the other.

After the wall is completed (Israel has not announced a specific date), Israel will control by force 80% of the Palestinian water resources available in the West Bank, estimated in total at about 750 million cubic meters annually.

In addition, 37% of the villages that depend on agriculture - and the wall passes through them - have affected their economic cycle, which will lead to the destruction of the olive oil industry after this region produced 22,000 tons of olive oil every season, fifty thousand tons of fruit, and one million tons of olive oil. vegetables;

It will also prevent about 10,000 head of livestock from reaching the pastures west of the separation wall.

Among its effects is the isolation of about a quarter of Jerusalemites from the city center, and a number of them have moved to change their place of residence, noting that the poverty rate has reached about 82% in East Jerusalem because of the wall.

The Palestinian educational and health systems have also been affected by the continued construction of the apartheid wall, where 20% of students, 19% of teachers and 37% of service employees are forced to cross the wall on a daily basis to reach their schools in East Jerusalem, and it has become impossible for tens of thousands to reach Health centers and hospitals located east of the wall.

Although the wall contributed to reducing the operations targeting the occupation, it did not achieve its goals in ensuring security for the occupation elements, especially after the Palestinians managed to develop and diversify methods of resistance according to the requirements of temporal and spatial circumstances.

He also - at the level of the Israeli front - raised other problems that were previously expressed by General Effi Eitam, leader of the extremist National Religious Party, by saying, "Whoever wants to prove the victory of the Palestinian national movement over the Israeli government has to look at this wall that the army is working on erecting around us, any achievement he wants." The Palestinians are more than they have achieved by forcing us to close behind concrete walls and barbed wire.”

Pinhas Wallenstein - one of the leaders of the settlers in the West Bank - went so far as to describe this wall as the "Auschwitz" camp wall, one of the concentration centers set up by the Nazis for Jews in Poland in the early forties, adding that the important difference is that "Auschwitz" was built by our enemies as for this wall. We are the ones who make it up for ourselves.”

1994: Former Israeli Prime Minister Yitzhak Rabin, who was assassinated by a Jewish extremist, was the first to raise the idea of ​​building a separation wall between the occupying state and the Palestinians, but Rabin was not, of course, talking about the wall being along the Green Line, but he was He proposes a tortuous wall so that East Jerusalem and some areas of the West Bank lie within it and the rest of the Palestinian territories outside it.

- At the time, Rabin's idea did not find a consensus among Israeli politicians, especially the right-wing Likud party, on the grounds that they wanted to continue the occupation of all of Palestine in its entirety.

- During the second Palestinian Intifada, which erupted in 2000, the idea of ​​building a separation wall found a new echo, especially with the increase in the frequency of armed operations of the Palestinian resistance behind the Green Line or inside what has become known as the Israeli depth.

November 2000: Israeli Prime Minister Ehud Barak approves a plan to build a wall in the northern and central part of the West Bank to prevent vehicle traffic.

The recommendations of this committee led to the implementation and expansion of Barak's previous plan to build a wall that would prevent Palestinians from crossing on foot into Israel in areas that pose a great threat to an area of ​​land that extends on both sides of the Green Line.

April 2002: The Israeli government decides to start building a wall consisting of fence sections and concrete walls in three areas of the West Bank, and a "Separation Area Administration" was established headed by the Director General of the Ministry of Defense, and the Israeli army began confiscating and razing lands.

- This decision came after a wave of martyrdom attacks in Israeli cities, which led to dozens of deaths and hundreds of injuries among Israelis.

- June 2002: The administration of the separation zone begins construction of the first phase of the wall based on the approval of the plan through Israeli government decision No. 2077 issued at the Israeli government meeting on June 23, and this plan provides for the construction of sections of the wall in the northern West Bank, and The northern and southern borders of the "Jerusalem envelope".

August 14, 2002: The Israeli government approves the route of the first phase of the wall, which consists of 123 km of walls and fences in the northern West Bank, in addition to 20 km around Jerusalem.

October 2003: The Israeli government issues a complete plan for the route of the wall in the West Bank.

June 30, 2004: The Israeli government issues an amendment to the previously announced route of the wall.

June 30, 2004: The Israeli High Court of Justice issues a ruling requiring that the humanitarian considerations of Palestinian civilians be taken into account during the planning and construction of the wall.

July 9, 2004: The International Court of Justice issues an advisory opinion stating that the wall being built in the West Bank violates international law, and demands the dismantling of the wall and compensation for those affected.

July 20, 2004: 150 member countries of the United Nations General Assembly, including all 25 European Union countries at the time, voted in favor of the resolution, while 6 countries, led by the United States, Australia and Israel, opposed it, and 10 countries abstained.

July 20, 2004: The United Nations General Assembly confirms the advisory decision of the International Court of Justice.

February 20, 2005: The Israeli government issues an amendment to the previously announced route of the wall.

September 15, 2005: The Israeli High Court of Justice says that the wall does not violate international law, and that it will continue to examine the impact of sections of the wall on the Palestinian population, in stark contrast to the decision of the International Court of Justice.

April 30, 2006: The Israeli government approves a modified route for the wall.

August 2, 2017: The Israeli Ministry of Security announced that it had completed the construction of a 42-km-long section of the wall between Tarqumiya and Miter, in reference to the Palestinian village of Tarqumiya, northwest of Hebron, and the Miter crossing, south of Hebron, near the settlement of the same name.

February 2022: Part of it, seven meters long, collapsed, due to large amounts of rain and internal pressure of dust and quantities of waste, inside the Palestinian area of ​​occupied Jerusalem, which usually suffers from neglect by the occupation municipality.