[Cinementary] Can a movie like this come out again? 'Top Gun: Maverick'

Last May 4, on the shores of San Diego, USA. A helicopter flew and landed on the deck of the USS Midway Museum, which was built by remodeling a retired US aircraft carrier. A middle-aged man in a three-piece suit wearing square boeing-style dark green sunglasses got off the cockpit and jogged. 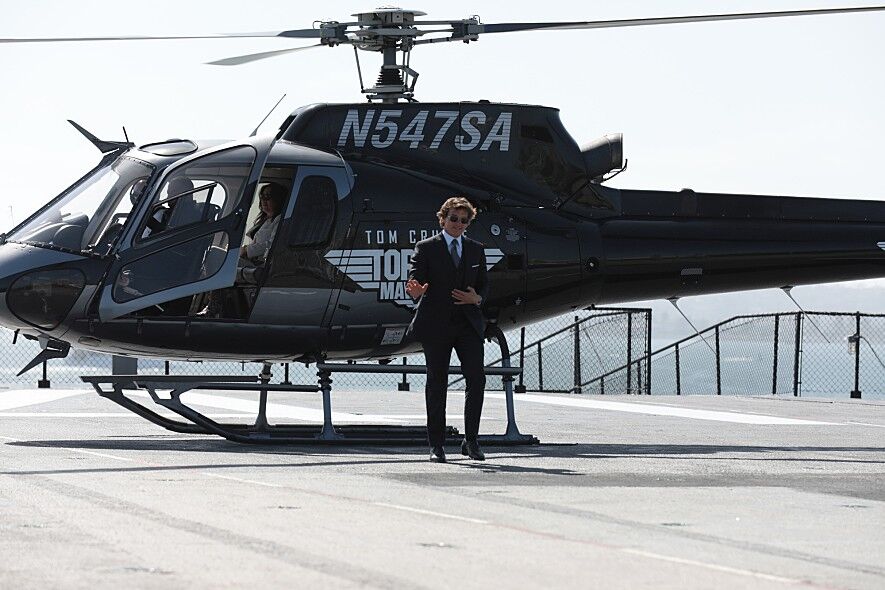 Last May 4, on the shores of San Diego, USA.

A helicopter flew and landed on the deck of the USS Midway Museum, which was built by remodeling a retired US aircraft carrier.

A middle-aged man in a three-piece suit wearing square boeing-style dark green sunglasses got off the cockpit and jogged.

He was 'Brother Tom'.

Today was the world premiere day of the movie "Top Gun: Maverick".

Making movies and flying airplanes has been Tom's dream since he was four years old.

("I was 4 years old and I wanted to make movies and I wanted to fly airplanes" - remarks during masterclass talk at the 75th Cannes Film Festival) Tom Cruise drives a helicopter and P-51 Mustang propeller fighter himself in "Top Gun Maverick" .

Of course you have a driver's license.

If there is a sample of 'Dreams come true', this is it.

Tom is also known for performing dangerous action scenes himself without a double.

He is worthy of being called the Jackie Chan of Hollywood.

(Expensive Hollywood top stars seem to buy their bodies for some reason. Even if investors and producers rip them off) In the cookie video of Jackie Chan's 1986 work "Yonghyeonghoje", Jackie Chan jumped from a wall into a tree and fell, breaking his head and bleeding NG. There is a scene, and in fact, at this time, Jackie Chan suffered a serious injury that caused his skull to collapse and his eardrum to go out, and there were even rumors of his death.

It seems like Tom Cruise is tough, too, so in "Mission Impossible: Fallout", he broke his ankle while jumping between buildings that looked 20 meters tall, and the scene where he limped without stopping filming is tongue-in-cheek. .

Even more surprising is that Tom was in his mid-50s when filming "Mission Impossible: Fallout."

Not long ago, while re-watching a few scenes from director Park Kwang-soo's realism film "Chilsu and Mansu (1988)," who opened 'New Wave' in the 80s, I accidentally found Tom.

In the background of the scene where the young Ahn Sung-ki of Mansu Station and the blue-eyed Park Joong-hoon of Chilsu Station were having a conversation, the theater sign flickered (at that time, the theater had a sign drawn by a person), and Tom's hyung's face was there.

In Korea, it was the sign of the first "Top Gun", which was released in the winter of 1987.

A 25-year-old young actor, Tom Cruise rose to international stardom with this film.

36 years have passed since the first "Top Gun" was released.

Next month, Tom will be celebrating his 60th birthday.

Tom's 60th birthday doesn't feel like the old days, but he still can't believe it.

However, let's think about it.

(Of course, he has been active as a blockbuster actor a lot lately)

The last real movie star of our time

Currently, the global box office is dominated by Marvel's superheroes armed with CG.

Tom includes theater in the concept of cinema, like Steven Spielberg, Christopher Nolan, and James Cameron, the few remaining 'theaterists' in Hollywood.

"Top Gun: Maverick" delayed its release for 23 months, the longest in Hollywood due to the coronavirus, but Tom did not hand over the film to streaming services while waiting for a theatrical release.

In the past, audiences went to theaters to see star actors.

When asked to go to the theater together, “Who is coming?” was the first natural question.

Arnold Schwarzenegger or Sylvester Stallone was a genre in its own right.

Now, such a 'global movie star' has disappeared.

The star actor who can attract audiences of all ages from around the world is now only about Tom Cruise.

The New York Times noted that 'Dwayne Johnson, Tom Holland, Zendaya, Ryan Reynolds and Chris Pratt have been incredibly successful, but they have not been proven to be tied to a particular franchise or superhero movie or to appeal to a whole generation." He also explained that 'character' is more important now than actor, Spider-Man has 3 actors and Batman has 6 actors, but the audience still went to see those movies. Is it a big deal?". On the other hand, I wouldn't go to see "Mission Impossible 7" without Tom Cruise. A

People around me often ask me how I feel about the sequel to "Top Gun".

"I don't know if 'Top Gun: Maverick' is a great movie. I wouldn't even say it's a must-see movie because it's so fun (because everyone has different tastes), but as much as this movie is the pinnacle of analog aerial action entertainment, the 'fact' 'C. It will be difficult to see a film like this again in the future."

Given Tom Cruise's age, it's remarkably unlikely that Tom will ever again use an actual US military 'strategic asset' of this size to make a film.

In addition, Jerry Bruckheimer, producer of "Top Gun" 1 and co-producer of the sequel with Tom Cruise, is now nearly 80 years old.

As one of Hollywood's top blockbuster producers, Jerry has worked with the Pentagon on films like "Black Hawk Down," "Armageddon," and "Pearl Harbor."

For "Top Gun: Maverick", Tom Cruise even wrote a training program for the actors who appeared together, such as Miles Teller and Glenn Powell, to encourage shooting with real fighter-bombers, not CG.

The actors adapted to the gravitational acceleration (G-force) through four months of training and even received underwater escape training in case of an emergency.

All of this is

These are difficult things to realize without Tom Cruise.

It simply means that the US military is not going to be able to make a movie just because they provide fighters and bring in famous actors and producers.

In "Top Gun: Maverick", the Nimitz-class aircraft carrier USS Theodore Roosevelt, which only the United States can maintain due to its enormous construction and maintenance costs, appears, and the US Navy's F/A-18 Super Hornet is the main aircraft operated by the Top Gun team. It catches the eyes of me and the audience.

Tom Cruise initially asked him to drive the F/A-18 himself, but it is said that the US Navy did not permit the piloting of this fighter-bomber, which costs 90 billion won per unit (almost half of the production cost of "Top Gun: Maverick").

Accordingly, Tom Cruise, like other actors, boarded the Super Hornet two-seater (two front and rear seats) and shot the movie.

On the back seat where the actors were riding, there were 6 cameras that could meet the IMAX level aspect ratio, and the actors themselves operated it.

If you watch the movie, there are air battle scenes that look close to CG-level low-altitude flight and aerobatics, showing off the combat capabilities of the US Navy squadron.

That's right, "Top Gun: Maverick" cannot be made without the full support of the Pentagon.

It is a well-known fact that the US Department of Defense and the Hollywood entertainment industry work closely together.

Immediately after the first "Top Gun," the world's top-grossing film in 1986, the number of U.S. Navy applications increased fivefold.

The "Top Gun" series naturally spreads the professionalism of the US military and massive and sophisticated hardware and systems to the world through the storytelling of dreams, courage, and challenges.

Recently, the British Guardian wrote an article titled 'Why Hollywood is the top ally of the US military'.

According to this, the Pentagon has a liaison office in Hollywood and carries out about 130 'British-military (film-military) cooperation' projects a year.

Not only the Department of Defense, but also the U.S. Army, Navy, Air Force, Marine Corps, and Coast Guard all have offices in Los Angeles.

Reservist Air Force Lieutenant Colonel Glenn Roberts, director of the Hollywood bureau of the Pentagon, told a US military-related podcast.

"Our mission is to project and report on the credibility and image of the US military."

Director Oliver Stone, who won the Academy Award for Best Director for "Platoon (1986)" and "Born on the 4th of July (1989)," about the Vietnam War films, repeatedly requested the Ministry of Defense's cooperation on these two films, but was rejected.

"Platoon" dealt with substance abuse, racism, and the genocide of Vietnamese civilians by the US military, while the movie "Born on the 4th of July", in which Tom Cruise was reborn as an actor, tells the story of PTSD (Post Traumatic Stress Disorder).

Oliver Stone said in a documentary film called "Theatres of War," about the relationship between the Pentagon and Hollywood, that "the Pentagon promised to bring accuracy to the film, but it was the opposite."

According to The Guardian, Oliver Stone had an opportunity to direct part one of "Top Gun," but he turned it down.

The relationship between the Pentagon and Hollywood has a long history.

The film "Wings", which won the 1st Academy Award for Best Picture in 1929, is, as the title suggests, depicting the U.S. Air Force's activities during World War I.

In fact, if you look at the movie, you can see realistic air combat action that makes you wonder if that level of shooting was possible in the 1920s, and this movie was also supported by the US Air Force.

This article is not intended to criticize "Top Gun" by revealing the fact that there is such a kind of 'connection'.

I want the audience to understand this fact behind the movie, take what they take from the movie and fully enjoy it as entertainment without confusing the movie with reality.

"Top Gun" is a film that provides the best entertainment a film can offer in this era.

Even in "Top Gun: Maverick," Tom hyung always keeps his back straight and runs with all his might.

In "Mission Impossible 7: Dead Reckoning," which is about to be released, Tom is sure to do the same.

I have to run too.

The only pilot who has shot down three enemy aircraft in the last 40 years.

He did his best, but he refused to disappear.

Maverick, you should have given it at least two stars by now.

But something, only a colonel.

, that's my question as well.

It's time to end it, Colonel Maverick.

The colonel should be gone soon.

(from the movie "Top Gun: Maverick")

※ If you scroll down, there is a button to subscribe to 'Cinementary', which is serialized every Sunday.

Thank you for your subscription.