China News Service, Beijing, June 25 (Xu Jing) "We have been here seven or eight times since last year, and the children like 'Despicable Me Minions' and 'Harry Potter and the Forbidden Journey', Universal Studios is our first choice for travel." On the morning of the 25th, Mr. Zhang's family of four wore T-shirts themed "Toothless", the character from the movie "How to Train Your Dragon", at th 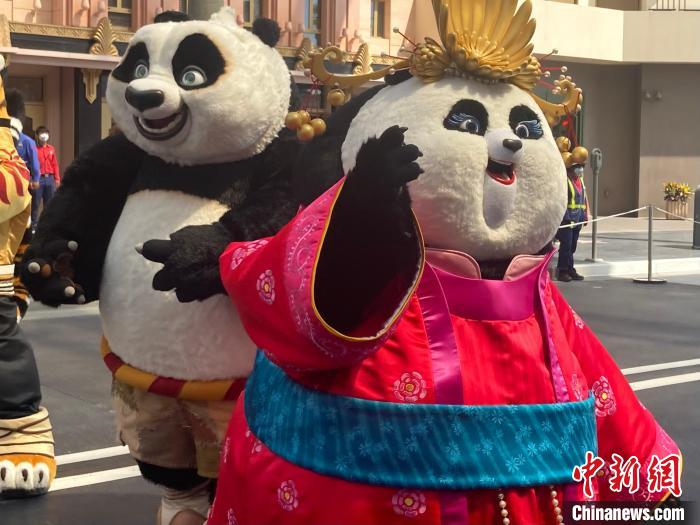 China News Service, Beijing, June 25 (Xu Jing) "We have been here seven or eight times since last year, and the children like 'Despicable Me Minions' and 'Harry Potter and the Forbidden Journey', Universal Studios is our first choice for travel." On the morning of the 25th, Mr. Zhang's family of four wore T-shirts themed "Toothless", the character from the movie "How to Train Your Dragon", at the Hollywood of the Universal Studios Beijing theme park. Take a group photo on the avenue.

Universal Beijing Resort will be temporarily closed from May 1 this year.

From June 24, operations will be gradually resumed in stages.

At about 9:30, the Universal Studios theme park welcomed the first batch of guests after the reopening.

"The epidemic prevention measures are very sufficient, and I feel very at ease, which basically does not bring inconvenience to the park." Mr. Zhang told reporters that he made an appointment for the morning admission time in advance.

When entering the park, the staff checked the reservation code of each tourist and the 72-hour valid nucleic acid test negative certificate, and then entered the park only after scanning the ID card for the intelligent inspection of "Beijing Health Treasure".

The reporter learned that Universal Resort strictly implements reservations for admission, and is currently open at a 75% current limit.

The resort has set up 22 large-scale body temperature screening points at each main entrance to quickly measure the temperature of each person who is about to enter the park; more than 80 smart health check terminals have also been set up at each entrance, which can be used to check ID cards. At the same time, the health treasure is verified to reduce the potential risk of crowd gathering.

The admission policy may be temporarily adjusted according to the epidemic situation. The park reminds the majority of tourists to pay attention to the official channels and learn about the latest admission policy before traveling.

At about 9:50, on Hollywood Boulevard at Universal Studios, several classic movie characters such as Kung Fu Panda Po and others gave performances to tourists.

Kang Zhaoning, executive vice president and general manager of Universal Beijing Resort, said at the opening ceremony that for more than a month, the resort has done a good job of cleaning and disinfection every day to ensure a safe and pleasant experience for tourists, "Today we once again made the movie come true, Restart joy."

"Please scan the code to enter the store, where hand disinfection can be performed." Outside the Harry Potter store on Hollywood Boulevard, clerk Zong Beibei guides tourists into the store.

She told reporters that when she returned to her post after more than a month, she was both happy and moved.

In the days when offline meeting is not possible, the park continuously organizes online training for employees to ensure service quality.

Yesterday, she reviewed the service procedures and epidemic prevention requirements several times, and took up her job in the best condition today.

On June 25, the theme park of Universal Studios Beijing reopened. The picture shows tourists disinfecting their hands outside the park's store.

According to reports, in order to prevent and reduce the risk of the spread of the epidemic to the greatest extent, the park will set up separate QR codes at more than 80 points in the main entertainment, dining, shopping and other places to achieve "one code for one place"; More than 1,200 points of hand sanitizer have been set up in various scenic spots, restaurants, and bathrooms, which are convenient for tourists to clean and disinfect at any time.

At present, the iconic attractions and riding facilities in the park such as "Decepticon Roller Coaster" and "Despicable Me Minions" have been opened. Universal Resort will reopen in due course according to the epidemic prevention and control situation and relevant requirements.