The Lebanese are waking up to torrential rain, thunderstorms and hail "in the height of summer"!

While several countries in the region are suffering from an unprecedented heat wave, regions in Lebanon woke up this morning, Saturday, to thunderstorms and unexpected heavy rain that reached the level of torrential rain, as a result of the arrival of a rapid air depression that hit the country in the height of the summer, unusually. Sudden coasts of Laban 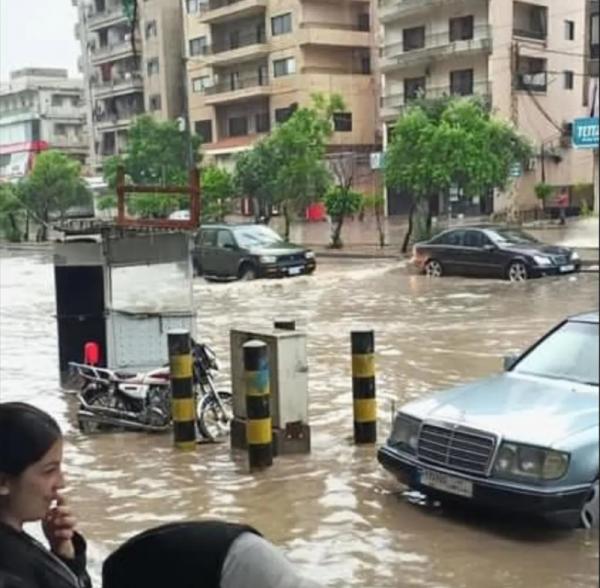 The Lebanese are waking up to torrential rain, thunderstorms and hail "in the height of summer"!

While several countries in the region are suffering from an unprecedented heat wave, regions in Lebanon woke up this morning, Saturday, to thunderstorms and unexpected heavy rain that reached the level of torrential rain, as a result of the arrival of a rapid air depression that hit the country at the height of the summer, unusually.

The sudden air depression affected the coasts of Lebanon, the western mountains, and the northern regions of the country, and caused severe material damage in some areas.

The rains were distributed between Tripoli, Akkar, Batroun, Jbeil, Kesrouan and Matn, accompanied by local thunderstorms and hail.

Residents and farmers in and around Qahmuz area in the barrens of Jbeil District, north of Beirut, woke up to great losses in agricultural lands, as a result of torrential torrents and winds, especially the plastic greenhouses that were destroyed by the speed and intensity of the winds, while the torrents flooded, washed away and damaged crops.

Head of the Meteorological Department at the Rafic Hariri International Airport, Abdul Rahman Zawawi, said: “It used to be that summer rain falls in mid-June, but this year it arrived late, and it is caused by air depressions that reached Turkey from southeastern Europe and is fed by the moisture of the Mediterranean and from the sea.” the black".

"The rain started falling in the north of the country, then it reached the south and the mountainous regions, and it cut off the coast to head to the Bekaa," Zawawi said.

The Lebanese official pointed out that "this year is colder in Lebanon compared to previous years, when the weather is ready for rain," noting that "several areas were affected by torrential rains in the north of the country, as well as in Beirut, where the Sin El Fil area east of the capital was the most affected." .

Al-Zawawi told "Sky News Arabia", "We noticed how the winter started late in Lebanon. These changes we have witnessed since 2017, and they are still going on today and result in rain in June, and this means that the summer will be longer. We are still living in the atmosphere of spring and may Summer is long until the end of November because the onset of winter is late in Lebanon.”

The meteorologist expected the weather instability to recede quickly and completely within hours, with the weather turning to clear in the evening, and the winds remaining active, with a speed of 40 kilometers per hour with a slight decrease in temperatures.

An eyewitness said, "A truck overturned and damaged a number of cars as a result of the sea storm off the Ghazieh beach, south of Sidon, in the south of the country."

A woman from the north of the country said, "The storm at the end of June was not expected, and it demolished a wall of a house in the Beddawi area on parked cars. It was a scene that made everyone cry."

Another appealed to the concerned and relief authorities for help, and said: "My son's car was completely damaged and we live in it, as well as all the neighborhood cars, and they belong to sick people and taxi drivers who suffer from extreme poverty and destitution."

One of those affected said: "The disaster occurred and my car needed $700 to get on the road again, and my house was damaged by the storm, and I live from my daily work on my private car that I work on for rent."