The number of local infections in mainland China has dropped by 7 consecutively. Beijing's current round of epidemic is effectively controlled

(Fighting against New Coronary Pneumonia) The number of local infections in mainland China has been increasing for 7 consecutive years. Beijing's current round of epidemic has been effectively controlled   China News Agency, Beijing, June 19. Comprehensive news: The National Health and Health Commission of China reported on the 19th that 36 new confirmed cases were reported in mainland China on t 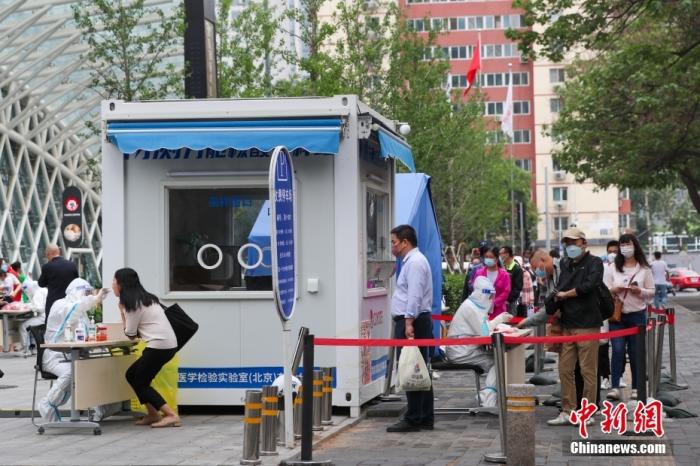 (Fighting against New Coronary Pneumonia) The number of local infections in mainland China has been increasing for 7 consecutive years. Beijing's current round of epidemic has been effectively controlled

China News Agency, Beijing, June 19. Comprehensive news: The National Health and Health Commission of China reported on the 19th that 36 new confirmed cases were reported in mainland China on the 18th, including 31 imported cases and 5 local cases (3 cases in Shanghai, 3 cases in Inner Mongolia and Liaoning). 1 case).

There were 123 new cases of asymptomatic infections, including 101 imported cases and 22 local cases.

No new deaths were reported.

The number of local infections in mainland China has dropped by 7 consecutively. Beijing's current round of epidemic is effectively controlled

On the 18th, there were 27 new local infections (confirmed + asymptomatic) in mainland China, a decline for 7 consecutive days.

Among them, 5 cases were confirmed locally, which fell to single digits for the first time since February 10.

There were 22 new cases of local asymptomatic infections that day, the lowest level since March.

The above-mentioned infected persons are distributed in 8 provinces and the Xinjiang Production and Construction Corps: 6 in Shanghai, 4 in Inner Mongolia, 3 each in Liaoning and Jilin, 2 in Guangdong, and 1 each in Beijing, Zhejiang, Guangxi, and the Corps.

The Beijing Center for Disease Control and Prevention notified on the 19th that Beijing added 1 case of local asymptomatic infection on the 18th, which was an isolation observer; from 0:00 to 17:00 on the 19th, there was 1 new local confirmed case, which was a social screening in Changping District. Find.

From June 9 to 17:00 on June 19, Beijing reported a total of 370 local infections, involving 14 districts and economic development zones.

The official introduction of Beijing said that as of 24:00 on the 18th, the number of daily cases in Beijing had dropped for five consecutive days, and the city had no new social cases for four consecutive days.

Except for Chaoyang District and Fengtai District, the other 15 districts (including the Economic Development Zone) have had no new social cases for more than 7 consecutive days.

The current round of the epidemic in Beijing has been effectively controlled on the whole, social transmission has been basically blocked, and the epidemic has entered the final stage.

However, Beijing officials said that on the 19th, 1 case of socially-positive infection was detected in Changping District, which served as a warning to the capital’s epidemic prevention and control, suggesting that there are still sporadic hidden sources of infection in local areas.

The closer the epidemic is to the final stage, the more vigilant and strict guarding must be taken.

The newly infected people in Shanghai are domestic service workers, and there is still a potential risk of transmission of the epidemic in Dandong, Liaoning

On the 19th, another case of asymptomatic infection was added to the public in Shanghai, who was a staff member of the domestic service industry.

The infected person's residence in Baoshan District is classified as a medium-risk area.

The Shanghai Municipal Health Commission said on the 19th that recently, with the gradual restoration of normal production and living order in Shanghai, the flow of people has gradually increased, and the risk of a rebound in the epidemic still exists.

People in the service industry need to strengthen their awareness of self-health management, strengthen self-health monitoring, and carry out nucleic acid testing and antigen self-testing in strict accordance with industry requirements.

On the 18th, Liaoning Province added 1 local confirmed case and 3 asymptomatic infections, which were still reported in Dandong City.

As of 24:00 on the 18th, more than 220 local infections have been reported in this round of epidemic in Dandong.

The Dandong Center for Disease Control and Prevention reported on the 19th that among the 4 new cases of infection in the city, 1 case was reported in the centralized isolation area, and 3 cases were reported in the upgraded prevention area. .

There were no new local confirmed cases in Guangdong Province on the 18th, and 2 new local asymptomatic infections, both in Shenzhen.

The Shenzhen Municipal Health and Health Commission notified on the 19th that the above two cases of infection were found in community screening.

The flow survey information shows that the trajectories of the above-mentioned two cases of infected people involve Futian District and Luohu District, including hospitals, art galleries, large pharmacies, supermarkets and other places with dense population and high mobility.

At present, Shenzhen is carrying out the disposal work in an orderly manner, including traceability, isolation and control, nucleic acid testing, and medical treatment.

The current customs clearance requirements for those entering through the Zhuhai-Macao Port (including Hengqin Port) who hold a negative nucleic acid test certificate within 24 hours remain unchanged.

It is reported that at least 10 people who have tested positive for nucleic acid have been found in Macau.

The Macau SAR government held a press conference on the 19th to announce that it is expected that there will be no less than 12 confirmed cases of new coronary pneumonia in Macau, and Macau faces the risk of community transmission of the new coronavirus.

The epidemic situation in Inner Mongolia continues to improve, and the closed area of ​​Erenhot City is cleared to zero

Inner Mongolia reported 5 new cases of local infection on the 18th (1 confirmed case and 4 asymptomatic cases), all of which were reported by Xilingol League.

This is also the first time that the number of local infections in Inner Mongolia has dropped to single digits since the current round of the epidemic.

The Xilin Gol League reported on the 19th that, as the hardest hit area of ​​the current round of the epidemic in Inner Mongolia, on the 18th, 14 more closed and controlled areas in Erenhot City were downgraded to control areas.

The current round of the epidemic in Inner Mongolia began in early June. Erenhot City took the lead in detecting nucleic acid-positive people in the screening of all tests and fever clinics, followed by the Chifeng epidemic and the Sunite Zuoqi epidemic.

However, the current round of the epidemic in Inner Mongolia began to fluctuate and decline after the new local infections reached a high of 130 (37 confirmed cases and 93 asymptomatic cases) on June 8.

At present, the epidemic situation continues to improve.

According to a report from the Xinjiang Production and Construction Corps, the 11th Division of the Corps added 1 case of local asymptomatic infection on the 18th, which was found during nucleic acid screening.

At present, all places involved in the trajectory of the infected person have been sterilized, and all the close contacts identified have been quarantined for medical observation.