In the middle of a narrow sloping path surrounded by cows and with spectacular views of the mountains and valleys around the Valle del Lago village, in the Parque... 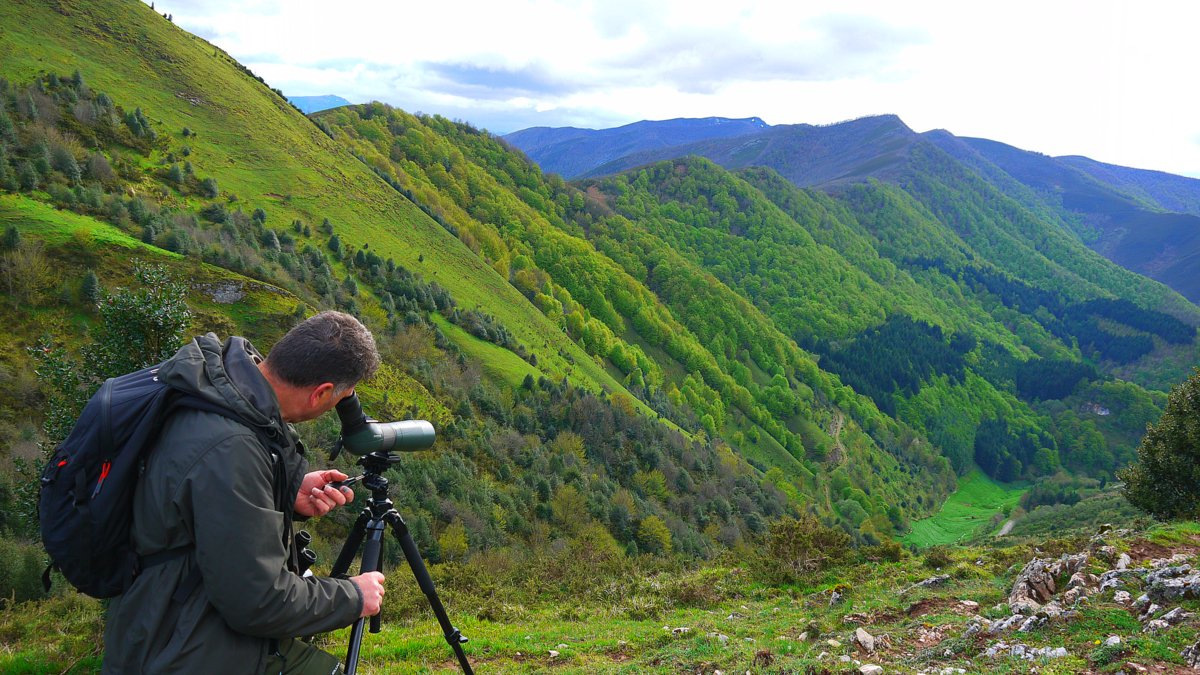 In the middle of a narrow sloping path surrounded by cows and with spectacular views of the mountains and valleys around the village of Valle del Lago, in the Somiedo Natural Park, Guillermo Palomero

waits patiently with his telescope

together with a small group of curious companions.

"My team has told me that this morning they have seen a bear with her cubs up there; let's see if there is luck now," says the president of the Brown Bear Foundation.

A few minutes before sunset,

a female and her two esbardos

(so they call cubs in Asturias) appear on a steep sunny side, near the summit surrounded by rocky ridges, to the delight of those present at the starting point. observation.

With binoculars you can see perfectly, from a mile away, how the young run around the mother and, with the telescope, other details such as the lighter color of the hair on their three heads or how, at a given moment, the bear begins to nurse the cubs.

The beautiful picture is increasingly popular in this western part of the Cantabrian Mountains in the south of the Principality.

This has been possible thanks to the enormous effort made by the Brown Bear Foundation (FOP), which has the support of other institutions such as The European Nature Trust (TENT), founded by the British philanthropist Paul Lister, whose mission is to save European ecosystems .

The FOP's commitment to protecting this animal, its habitat and the environment since its creation in 1992 has been described as

the greatest conservation success in Spain to date

: the population of the brown bear in the last 30 years in the The Iberian Peninsula has gone from a mere 80 specimens in the early 1990s to nearly 300 that today exclusively inhabit this part of the Principality.

"The fact that there are more and more bears and also more population in the villages (especially in summer) means that the encounters between humans and specimens, although very rare, have increased, for this reason, in addition to the protection of animals, Another of our missions is to keep them as far away as possible from the towns," says Juan Carlos Blanco, from FOP.

To do this, the Foundation is planting forests of fruit trees (especially cherry trees) in different places so that the bears go to these areas when food is scarce.

The leafy forests and steep mountains of the Natural Parks of Fuentes del Narcea Degaña and Ibias, Somiedo and Las Ubiñas-La Mesa, located side by side to the southwest of the Principality, are the places where almost all of the brown bears in Spain, about 300. The rest, about 50, live in the eastern part of the Cantabrian Mountains.

The three Parks are protected spaces and all three have also been declared Biosphere Reserves, so they have areas whose access is restricted.

Even so, there are viewpoints in all of them equipped with car parks and panels

so that the public can stop

to watch the bears.

For this, two things are essential: a telescope, or alternatively powerful binoculars, and a lot of patience, "because the bears are there, but they rarely show themselves," says Luis Frechilla, biologist and guide at Wild Spain Travel, a specialized travel agency in the observation of fauna and nature.

From lookout to lookout

there are several viewpoints to take into account: the

viewpoint , located on the winding Puerto de Leitariegos road, in the vicinity of the town of Brañas de Arriba, equipped with an interpretive panel of the high areas for bears , and

, in the council of Villarmeirín.

For its part, in the

, included in the municipality of the same name, it is estimated that the largest number of this protected species lives and where there are more sightings, as it is a more open and limestone terrain.

The 38 towns nestled in the Park, surrounded by rocky and high mountains, often serve as spontaneous viewpoints, such as the main square of Pola de Somiedo, capital of the municipality.

Even so, the City Council has established a series of them (up to eight) so that the observation of the specimens does not interfere with their conservation and also prevent the public from stopping the car in the middle of the road.

, 1.8 km from Pola (you can walk along a marked path), as well as the spectacular

The latter is in the rural village of La Peral, a place surrounded by traditional teito huts (built with a roof made of branches) at an altitude of 1,294 meters.

to the Casa del Oso

(Flórez Estrada, 1), the interpretation center where there are bear bones from more than 10,000 years ago, old hunting traps, such as forge traps, and other more current ones that are already illegal, and videos and panels that explain where the specimens are, how they live, their customs and what to do in the event (extremely rare) that encounters with humans occur (Admission price: 4 euros / 2 euros children).

House of the Bear in Pola de Somiedo.

, the closest to Oviedo, also has its own particular population of bears.

In recent days, a bear with two cubs has been seen in the vicinity of the medieval village of Bandujo, 10 km from the council of Proaza.

, on the border between Asturias and León, is another of the watchtowers enabled to see these specimens and other fauna of the area, such as roe deer, chamois...

In Proaza there is also

, a greenway along which the mining train used to run along the Trubia river valley, which runs through the councils of Proaza, Teverga, Quirós and Santo Adriano.

In this last town, very close to the Buyera recreational area, is

the Paca and Molinera

bear enclosure , two bears that live in semi-freedom that could not be reinserted into the mountain in their day.

Anyone who comes along the path can see them, especially at lunchtime, at 12 noon.

The Brown Bear Foundation is in charge of its feeding and care and the maintenance of the facilities.

Right there there is a small viewpoint to better see the enclosure.

All these observation points are accessible to anyone who wants to go on their own, but there are many more that only specialized guides know about.

"There are about 13 authorized in the three parks to go with a guide that are not very accessible, because you have to go with an off-road vehicle and on complicated roads," says Víctor Trabau, from Trabau Ecotourism.

His agency is one of those that organizes tailor-made excursions with small groups (no more than six) to follow the trail (and history) of the Cantabrian brown bear (50 euros person / four hours).

"We sell vital experiences, which include something more than seeing animals (because sometimes they are not seen). We give added value, we tell the history of the place, anecdotes, keys to bear conservation, we visit places where traditions are still deeply rooted, We go where there have been encounters... The icing on the cake is seeing the bear when you least expect it and we spent an hour in the cold at an observation point," says Víctor.

How to get there:

The neighboring Natural Parks of Las Ubiñas-La Mesa, Somiedo and Fuentes del Narcea are located between 45 minutes and two hours by car from Oviedo.

Casa Ponce is a traditional restored farmhouse in the quiet village of Posada de Rengos, in Cangas del Narcea.

It is built within a paved patio closed by large gates, in which a centennial hórreo is preserved.

Casona de Don Santos is an old Asturian palace from the 17th century remodeled with modern touches in the town of Proaza, next to the Senda del oso.

In its extensive gardens there are palm trees, orange trees, lemon trees, cherry trees... From 106 euros.

Here its pot of cabbage with potatoes stands out.

(El Puente, 2, Proaza) it offers a varied menu of Asturian dishes with a more avant-garde touch.