Angela Sofia Sterzer, the manipuri dance attached to the heart

Choreographer and dancer, German Angela Sofia Sterzer is based in Paris. She practices and teaches Manipuri dance, one of the oldest classical Indian dances, which she mixes with… 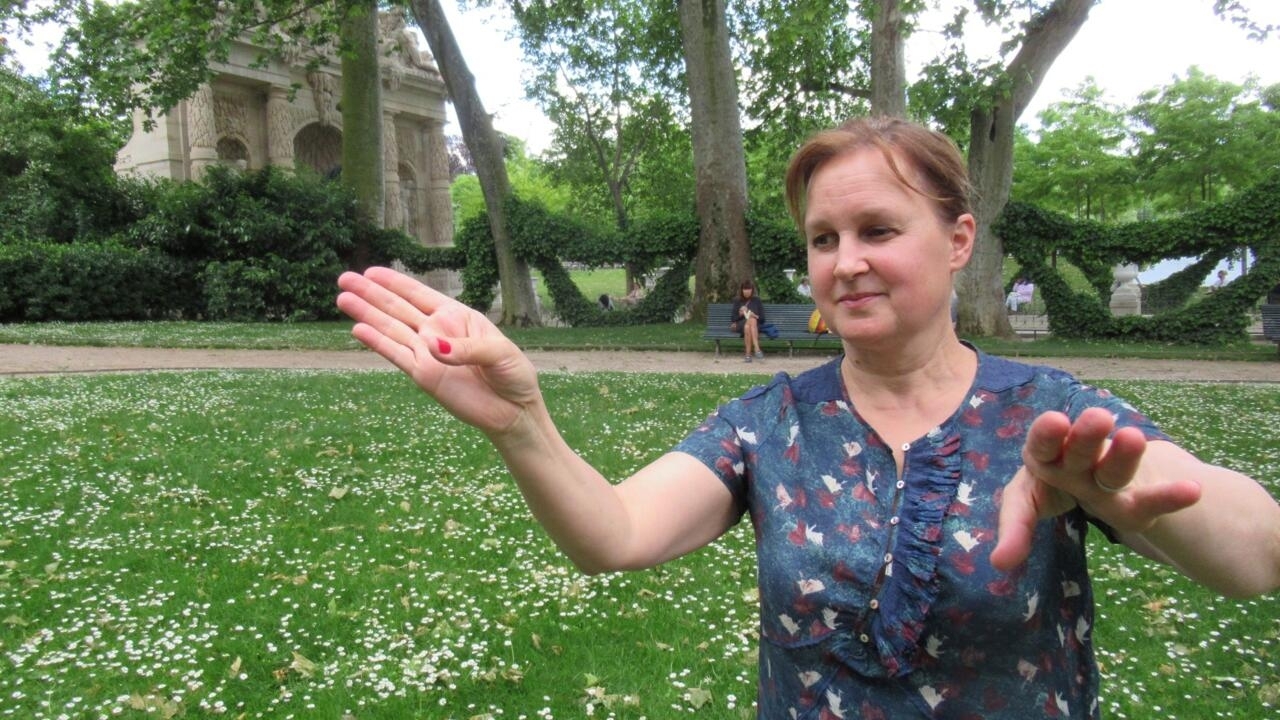 Angela Sofia Sterzer, the manipuri dance attached to the heart

Angela Sofia Sterzer in the Luxembourg Gardens, in the 6th arrondissement of Paris, in May 2022. © RFI - Bastien Brun

Choreographer and dancer, German Angela Sofia Sterzer is based in Paris.

She practices and teaches Manipuri dance, one of the oldest classical Indian dances, which she mixes with contemporary dance.

Meeting with this artist who sings, passionate about strong women, and who, no, does not dance Bollywood.

When Angela Sofia Sterzer talks about dance, she often walks the talk.

She straightens her chest, tilts it back slightly in her chair, and her arms and legs spread out.

Choreographer and dancer, this little piece of woman has been living in Paris for almost thirty years, where she teaches Manipuri dance.

I am often asked if I do

, I answer no, that it is a classical Indian dance

Coming from the state of Manipur, in northeastern India, this ancestral discipline has become “

To describe this art for which she has become an ambassador in France, Angela compares her "

It's a dance that is very close to nature.

He's right, because we're always between the ground and the sky.

In many texts, it is written that it is a dance which undulates, with movements which are always in eight, in a permanent flux.

She also evokes a very "

" dance, whose gestures are "

From contemporary dance to Indian dance

When you meet her in the Luxembourg Gardens, you will wonder how a 54-year-old German, living in France, was able to steal Indian dance.

A good hour and a half of conversation will allow us to see more clearly in this fragmented geography.

Having grown up in Bavaria in a very Francophile family, Angela multiplies language stays during the holidays.

This allows him to establish a first link with France.

As a child, she was fascinated by the folk dances she saw “

on the spring markets

I had a girlfriend who was in a group of dancers.

I was already starting to do choreography in the cellar.

It was a dream for me

Leaving gymnastics as a teenager, she decided to dive into classical dance.

Once she got her baccalaureate, she left to study in Munich.

She has the idea of ​​doing contemporary dance.

At the end of the 1980s, Paris experienced a bubbling in this area, attracting dancers and choreographers from all over the world.

Angela dances with the company of the Spaniard

and goes from one class to another.

Attracted by the Belgian school, she tries to join the troupe of Anne Teresa de Keersmaeker, but fails.

A scholarship allows him to stage

, a show around Damia.

With this first choreography on the realistic singer – another will follow on Anaïs Nin, in particular –, Angela is interested in the one who was the first lady in black of French song, before Piaf, Barbara or Juliette Gréco.

There is a strange resonance between Damia, the singer who dreamed of being a dancer, and Angela, the dancer who named her company

What led him to Indian dance?

The memory of the Malaysian dancer Lari Léong, who was one of his teachers before dying prematurely of AIDS.

Having become a contemporary dance teacher, she discovered Manipuri dance in 2000 and it was “

“What touched me was the relationship with my master”

At Angela, contemporary dance is intimately linked to Manipuri dance.

Three years later, she left to learn this style in Santiniketan, in West Bengal.

What touched me a lot was the relationship with my master.

Whatever I seek to learn, it was always: "Yes".

There were no limits

Angela Sofia Sterzer and her dance partner, Manju Elangbam, at the Guimet Museum, in Paris, in 2014. © Jean Gros-Abadie

A mountainous state located on the border with Burma,

Angela makes regular trips to eastern India, before perfecting her skills in Manipur, alongside a new teacher, Ibemubi Devi.

, by Stravinsky, for Manipuri dancers, with the encouragement of

In 2017, she is the first dancer in Europe to be recognized on the Indian government's list as a Manipuri solo dancer and continues to promote this dance everywhere.

A film she has made recounts her experience.

But how do you master a discipline so far removed from your culture?

It goes through life together.

I have always lived with the family of my first teacher and my dance partner,

We know the rhythm of a day.

We know how we clean the house, which is a kind of prayer.

We know how the two religions rub shoulders, the ancient religion of the Meitei people and Hinduism, which arrived in the 17th century.

Due to Covid-19, Angela has not returned to India for three years.

But she has just presented her last show and intends to return to Manipur.

Lately, she has started to write again in her native language, German, always scouring the Parisian gardens.