A businessman without money, a butler without an accent: the filming of the series "Poor Oligarch" is underway in the Moscow region

Filming of the series "Poor Oligarch" with Vladimir Sychev and Maxim Lagashkin is taking place in the Moscow region. The writers of the tape were inspired by real news to come up with a topical and satirical plot. The action revolves around a Russian oligarch living in London, who falls under sanctions and loses his property. The abandoned businessman is supported only by his butler. Heroes are waiting for a lot of ridiculous situations and troubles. The director was Hayk Asatryan. 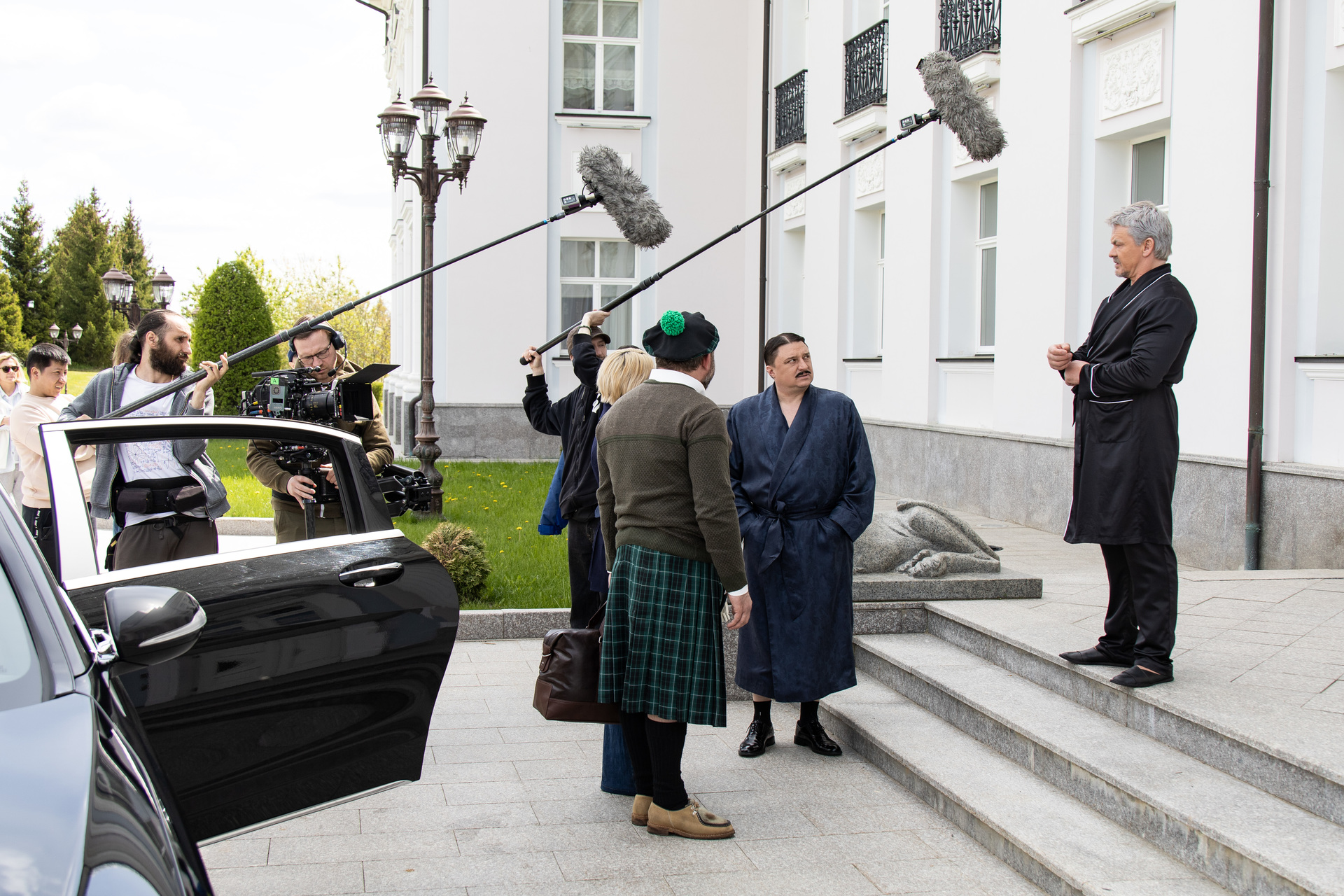 Filming of the comedy series "The Poor Oligarch" on TNT and the Premier online cinema with Maxim Lagashkin and Vladimir Sychev in the lead roles is underway in the Moscow region.

In the center of the plot is a wealthy businessman Viktor (Sychev), who lives in London in a luxurious house.

He has everything that money can buy: a yacht, expensive cars, a private jet and real estate around the world.

However, the life of the hero changes dramatically when he falls under sanctions - all his accounts are blocked, and his property is arrested.

Friends and buddies have turned their backs on the impoverished oligarch, and the attendants do not agree to work without a salary.

The only one who remained and supported him was the valet Adam (Lagashkin).

It is he who will help Victor survive and rediscover himself.

The director of the project was Hayk Asatryan.

News as a source of inspiration

According to Sarik Andreasyan, the idea of ​​the project arose in March, when the first news appeared that sanctions had been imposed on Russian businessmen.

“At first we laughed, and then, when the news had already appeared that they could not live on $3,000 a month, we started to disperse the story: in a country where the average salary is 15-20 thousand rubles, someone cannot live on $ 3 thousand. We have a group of screenwriters who began to think that if you make a series about a disgraced oligarch who is left alone under sanctions and is trying to somehow get money, then this is ridiculous ... We wrote for two months (scenario. -

) and started filming, ”said the producer.

Every news that appeared in the media on this topic, the writers tried to introduce into the plot.

Specific names are not named in the tape, but Sarik Andreasyan noted that those who are aware of the agenda will understand the irony of the story told.

“This is to some extent a satire, and if you know the latest news, it will certainly be funny to you,” he said.

At the same time, the authors of the project, with their idea, are trying to convey an idea that is vital at all times: money cannot buy happiness, love and friendship.

“It’s still a story about friendship.

It starts with an arrogant oligarch who pretends to be part of British society, and then a guy from Voronezh appears in him.

And he understands that you can be happy without a lot of money, that simple things, such as friendship, love, and so on, are not worth money.

Next to him there is a butler - Adam.

This is an adequate character, and this story is told through him.

In fact, this is the transformation of the hero, the formation of something human,” says Sarik Andreasyan.

The selection of actors for the main roles was quick.

According to Sarik Andreasyan, he immediately noticed Vladimir Sychev for the role of the oligarch Viktor, and since the hero is not a true English gentleman, but is more multifaceted and combines different qualities, Sychev fit perfectly into his portrait.

“In Sychev there is an amazing combination of a Russian provincial man who can be made into such an oligarch.

We could not tell a story about a very intelligent oligarch, it would not have evoked emotions.

We needed a combination of the fact that 15-20 years ago he squeezed out factories in Yekaterinburg, and now he puts on a suit and speaks English.

And in general, it seems to me that Volodya has this combination, ”the producer explained his choice.

Maxim Lagashkin found out about the series a little later than his colleague, but immediately agreed to the role.

According to him, this is an interesting project, and working in tandem with Vladimir is a great pleasure.

“I agreed right away, since Volodya Sychev and I have already filmed several times, and we had such a small partnership in the frame.

We kept thinking about where we could play the story for two.

We met all the time, talked about it, but nothing happened.

And then it happened, so I made the decision so quickly, ”the actor explained.

Sychev and Lagashkin met a long time ago, became friends and managed to cross paths several times during their career on the set.

For example, in 2021 they were working on the film The Damned Official.

“We have such a corefan relationship.

We have known each other for a long time and are always happy to see each other on the site.

We have purely partner frictions, because none of us is indifferent to our own affairs, but conflict situations are appropriate and relevant.

And everything is fun, ”said Lagashkin.

On the set, the actors are really comfortable together: they often joke and play each other.

And sometimes such funny moments not according to the script are left in the series.

By the way, both the heroes, Victor and Adam, from the initial status of the employer and the subordinate, should eventually become true friends.

The character of Vladimir, thanks to the support and help of his valet, realizes the importance of love, empathy, sincere friendship.

“This story, if you dive into it globally, is about two friends.

Yes, one subordinate, the other is the master, but the oligarch finds himself in extreme conditions, like all Russian oligarchs in London today, falls under sanctions.

He is deprived of all his property, his accounts are frozen, and as a result, everyone quits, in fact, he remains with one butler.

He had some urge to leave, but something stopped him, and he concluded for himself that he could not leave him ... In the process, both understand that their relationship is more than a master and a subordinate.

They become friends, ”Maxim Lagashkin revealed the details of the plot.

Despite the fact that the butler in the series has a British name, he lived in Russia and was raised by a Russian grandmother.

Therefore, the hero of Maxim Lagashkin in the frame practically does not speak English and does not have a bright foreign accent.

“They left Russia as children (Adam and his sister Agatha performed by Maria Kravchenko. -

) and since they were raised by a Russian grandmother, all mental, linguistic and human things are more Russian,” the actor explained.

However, the corresponding humor of the hero still slips.

According to Lagashkin, Adam often uses some kind of Scottish metaphors, anecdotes, aphorisms: “In principle, he has a butler, education, too, this is a whole profession in England, but Russianness cannot be put anywhere.”

The satirical humor and cast can hook many viewers, and the location in which the main part of the story unfolds will add charm to the shots and create the right atmosphere for a rich estate in London.

“I say to everyone who comes here: “Look how you will never live,” Sarik Andreasyan joked while talking to reporters.

The mansion where The Poor Oligarch is filmed is really huge.

Impressive baroque design goes well with the elegant costumes of the protagonists.

Andreasyan admits that he himself was surprised when he stumbled upon the mansion while looking for a location for filming.

“At first I saw it in the photographs and did not believe it: it must have been taken with some kind of wide-angle lens.

We arrived, and I realized that this is just the whole world, - said the producer.

“We can’t rent every room, but it’s very comfortable and fits a certain level that we wanted to achieve in terms of picture, so that everything is rich, so that people believe that we are really telling a story about an oligarch.”

The film crew chose from a variety of houses and looked for one that would visually resemble a luxurious mansion in the British capital.

“The first thing I joked about was that you can shoot the fifth season of The Crown here, and no one will understand anything,” the producer said.

Work on the project has not been going on for the first week, and the actors sometimes continue to get lost in the area, because the area around the mansion is very large-scale, and if inside the house resembles the Hermitage, then the gardens, fountains and alleys around are a real Peterhof.

The authors of the series assure: the ending of the season will be happy.

However, whether the story about the oligarch Viktor and his valet Adam will end is still unknown.

Sarik Andreasyan and other members of the group are thinking about making a second season, but so far these are just thoughts.

“We, as true producers, want the series to be many.

We leave the entry, of course, for the second season, but if it works out, then this will not happen in this house, there will be a new story, ”he explained.

There are ten episodes in total in the first season.

The duration of one episode is about 20 minutes.

The premiere date is still unknown, but it is expected that the viewer will be able to see the series in August 2022.