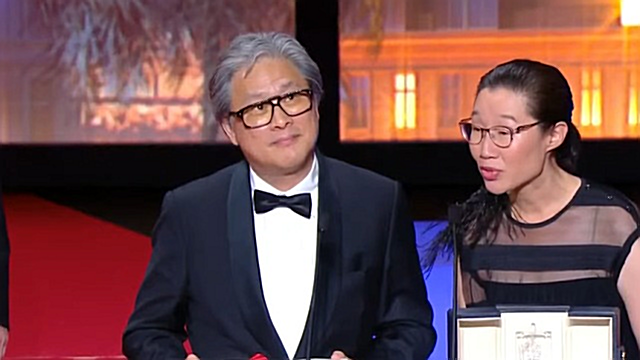 At the 75th Cannes Film Festival, both Korean films were honored with awards, with a meaningful result.

The closing ceremony of the 75th Cannes International Film Festival was held at the Lumière Theater in the Palais de Festival in Cannes, France on the afternoon of the 28th (local time).

At this year's Cannes Film Festival, which was held normally in three years after overcoming the COVID-19 pandemic, a large number of Korean films were invited to confirm the changed status.

In 2019, director Bong Joon-ho's 'Parasite' won the Palme d'Or at Cannes and won the Best Picture at the Academy Awards the following year, creating a worldwide craze.

And at this time, well-made Korean films knocked on the door of Cannes once again.

The honor of receiving the award was also an inevitable result.

it was 'National Actor' Song Kang-ho who opened the door for the award as 'Khan's Favorite'.

Song Kang-ho won the Best Actor Award for his role in 'The Broker'.

'The Broker' is the first Korean film directed by Hirokazu Koreeda, a Japanese master who won the Palme d'Or.

It is a human drama depicting the process of men and women without a drop of blood meeting through a baby box and forming similar family relationships.

In this work, Song Kang-ho is Sang-hyeon, who runs a laundry and works as a broker.

Shortly after it was released in Cannes on the 23rd, reviews of the movie were mixed and the prospect of the award was not bright, but Song Kang-ho, who took the center stage in the play and vividly embodies the humanism of director Koreeda Hirokazu, was awarded the Best Actor Award.

Immediately after the award, Song Kang-ho said, "I am so grateful and honored. I am deeply grateful to Director Koreeda Hirokazu."

He continued, "I want to share this honor with Dongwon Kang, Jieun Lee (IU), Jooyoung Lee, and Doona Bae. shared with colleagues.

He also expressed his emotion, saying, "I came with my beloved family. I am happy that it was a great gift, and I dedicate glory and eternal love to this trophy."

It was the result of the recipient.

Song Kang-ho is a self-proclaimed best actor in Korea.

He had an early relationship with the Cannes Film Festival.

Last year, he also served as a jury member and contributed to the film festival.

At the Cannes Film Festival, Song Kang-ho showed affection and courtesy whenever he visited Cannes, and he did not forget that he was the most important actor in the Korean film industry.

Kang-ho Song, who once again visited Cannes as a 'broker', did not return empty-handed this time.

It is the second time for a Korean actor to win an acting award at the Cannes Film Festival after Jeon Do-yeon in 'Miryang' in 2007, and Song Kang-ho is the first male actor.

Park Chan-wook, who entered the Cannes Film Festival competition after six years with his new film 'Decision to break up', marked a historic page in his career by winning the Best Director award.

'Decision to Break Up' is a movie about a detective Hae-jun (Park Hae-il), who is investigating a murder case in a mountain, meeting the wife of the deceased, Seo-rae (Tang Wei), and feeling suspicious and interested at the same time.

It is a masterpiece that strongly reflects the personality of director Park Chan-wook as a film that mixes melodrama and investigation.

Among the 21 films invited to this year's film festival, this film received the highest rating from critics and was also expected to win the Palme d'Or, but the judges awarded the Best Director Award to 'The Master of Korean Cinema', expressing awe for his film world and philosophy. .

On the stage after receiving the award, director Park Chan-wook said, "There were times when we humans raised our borders high while going through the Covid era, but we also shared a single fear and anxiety."

He continued, "Movies also experienced a loss of customers, but I think it was an opportunity to realize how precious a cinema is. Just as we have hope and strength to overcome this disease, our filmmakers and filmmakers also I believe that we will protect it forever,” he emphasized, emphasizing the power and greatness of the cinema that will never end.

Also, "Above all, my love to these two people, Haeil Park and Wei Tang, is in words... I will omit the detailed explanation. Lee Mi-kyung, Vice Chairman of CJ Group, who gave full support to the film, and Jeong Seo-kyung, who wrote the screenplay for the film I would also like to express my gratitude to all the members of our 'decision to break up' including ."

◆ 'History of Khan' that started with Im Kwon-taek...

Korean cinema has made rapid progress over the past 100 years, but in terms of the global film stage, it was close to the periphery.

However, since the 2000s, it has succeeded in winning awards at the Cannes Film Festival, the most prestigious of the world's three major film festivals, and has begun to raise the status of Korean films around the world.

The award-winning relationship between the Cannes Film Festival and Korean films dates back to 2002.

Director Im Kwon-taek, a master of Korean cinema, entered the competition with 'Chwihwaseon' and won the Director's Award.

In 2004, director Park Chan-wook caused a stir when he won the Jury Grand Prize for 'Oldboy'.

In 2007, Jeon Do-yeon won the Best Actress Award for her role in the movie 'Miryang'.

In 2009, director Park Chan-wook was invited to the Cannes Film Festival once again for 'The Bat' and won the Jury Prize, and in 2010, director Lee Chang-dong's 'Poetry' won the Best Screenplay Award.

This year, director Park Chan-wook's Best Director Award and Song Kang-ho's Best Actor Award were also added, giving a Korean film a chance to win all 7 of the Cannes Film Awards in 20 years.

In particular, it is the first time that two Korean films have successfully entered the competition and won the main prize.

Although the award result at the Cannes Film Festival is not an indicator of the level of filmmakers and filmmakers in that country, it is applaudable that our films of different nationalities and languages ​​have been recognized for their uniqueness and excellence in France, the home of cinema and the center of art. it's an achievement