Zhongxin Art Review: In the adult world, never give up easily

China News Entertainment, Beijing, May 25 (Reporter Wang Shiyao) If you are at a low point in your life, do you choose to be discouraged and accept it, or grit your teeth and persevere through the difficulties? When you want to choose to give up, you might as well read their stories. The variety show "Welcome to the Mushroom House". Image source: Mango TV official Weibo Hold on to have hope 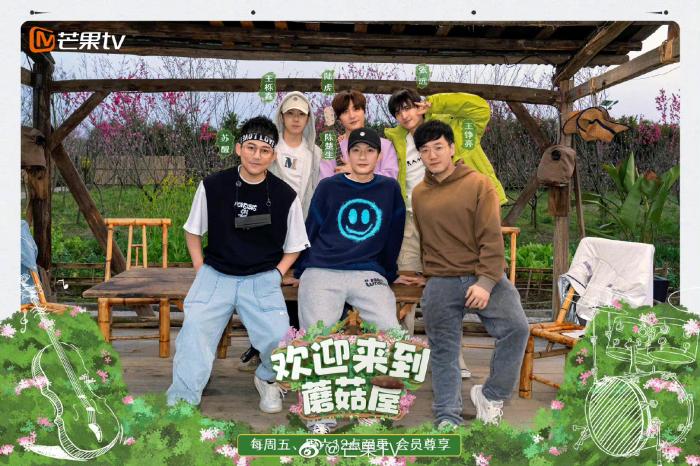 China News Entertainment, Beijing, May 25 (Reporter Wang Shiyao) If you are at a low point in your life, do you choose to be discouraged and accept it, or grit your teeth and persevere through the difficulties?

When you want to choose to give up, you might as well read their stories.

The variety show "Welcome to the Mushroom House".

Hold on to have hope

Do you still remember the meaning of the number "0713"?

Once they were the "top draft" of the year, but as time passed, many of them gradually faded out of the public eye.

Chen Chusheng, Su Xing, Wang Lixin, Zhang Yuan, Wang Zhengliang, and Lu Rover, these six names that have not been mentioned for a long time, why have they frequently appeared on hot searches recently?

This starts with a variety show called "Welcome to the Mushroom House", which was launched in April as a pre-heated pilot program for "The Sixth Season of Longing for Life".

As a spin-off show, "Welcome to the Mushroom House" has been called "the poorest show in history".

It is such a variety show that did not have any publicity in the early stage. The staff were also "temporary workers" borrowed from the team next door, and finally became a "dark horse", gaining unprecedented attention and bringing fire to these 6 shows. "Re-employment boy group" member.

The reason why they are called "re-employment boy groups" is that they laugh at themselves that they have almost no jobs, so they cherish every opportunity to work.

They used their "truth" to complete this "show" that they thought no one cared about. There was no so-called "personality" in the show, but only lively "people".

In the face of this "popularity", they may thank themselves who are still holding on to their dreams.

Because of gritted teeth and survived the trough period, finally ushered in the moment of dawn now.

The data picture is Li An.

Bottom is for a better rebound

The success of the famous director Ang Lee is obvious to all.

However, this legendary figure in the Chinese film world is not actually a "genius". He scored zero in the mathematics test and failed the college entrance examination twice.

Before Li An succeeded, he had been unemployed and worked at home for 6 years as a "family cook".

Ang Lee studies movies and scripts at home, carefully looking forward to an opportunity for a dream to come true.

However, 6 years is too long, he has also been shaken, and he doesn't know if he has to persevere.

Ang Lee also secretly went to study the most popular computer major, but was banned by his wife Lin Huijia after discovering it, and scolded angrily, "There are so many people who study computers, and there is no shortage of you, Ang Lee!"

It was his wife who understood Ang Lee's talent and believed that he would usher in a rebound moment after hitting the bottom. He gave Ang Ang a lot of support and made him secretly make up his mind, "I will definitely give you (wife) back an Oscar. award".

Facts have proved that Ang Lee kept his promise.

After 6 years of bottoming out and accumulating strength, his career has finally soared into the sky, completing the gorgeous transformation from "unemployed youth" to "well-known director".

Screenshot of the movie "Minari", the picture shows Yin Ruzhen.

Yin Yuzhen, born in 1947, should have never thought that she would win the Oscar for Best Supporting Actress at the age of 73 and create Korean film history.

Looking back on her acting career, it can be described as ups and downs.

If you stand on the coordinate axis of life, her curve has experienced several ups and downs.

When she was a student, Yin Ruzhen was admitted to Hanyang University, a famous Korean school, by virtue of her intelligence, and became a leader among her peers.

Having been exposed to the profession of an actor during college, she made a risky decision and resolutely dropped out of school to join the showbiz.

Yin Ruzhen, who has both strength and luck, broke out in both the film and TV drama fields shortly after her debut, and won a lot of awards while gaining super popularity.

However, Yoon Yoo Jung, who was in the period of her acting career, suddenly got married in 1972 and settled in the United States with her husband.

After this smash hit "star" briefly shined in the Korean entertainment circle, she officially retired from the circle and became a housewife.

But this marriage did not bring Yin Ruzhen the ideal happy life. In the end, her husband's derailment made her reluctantly cut off the marriage that lasted for 12 years.

Yin Ruzhen, who returned to being single, was 37 years old at the time, and the road to returning to the entertainment industry has become difficult.

In this way, she was dormant for more than ten years. In 1995, she waited for the TV series "The Men of the Bathhouse Boss" that really made her comeback. At that time, she was almost 50 years old.

No one's life is easy, give up easily, life will only become more difficult.

It is this spirit of not admitting defeat and not accepting fate that allows Yin Ruzhen to stand up from the trough again and again.

Her spirit also inspires those around her to move up together.

Yin Ruzhen's good friend Jingzi mentioned in an interview: "As we get older, our goals in life will gradually disappear. But Sister Ruzhen shows us that we are not old and can still achieve some things. At 70, something can happen to us, and my sister's win gave me hope."

Life will not be peaceful, life is full of ups and downs.

Even if you are in a trough, as long as you grit your teeth and push through, you will always see a bright future.

In the world of adults, don't give up the word lightly.

Do not admit defeat, persevere, you may be the winner in life.