Real love story and restaurant passions: what are the main movie premieres of the week about

On Thursday, May 26, the historical film “Amanat”, the comedy for the whole family “My dad is the leader” with Dmitry Nagiyev, as well as the film version of the series “Manyunya” will be released in Russian cinemas. Foreign releases include the drama about the chef “Boiling Point”, filmed in one take, and the Polish film “The Escorts”. In addition, No Country for Saints will be screened this week, in which a former prisoner seeks revenge for the death of his wife and the kidnapping of his son. 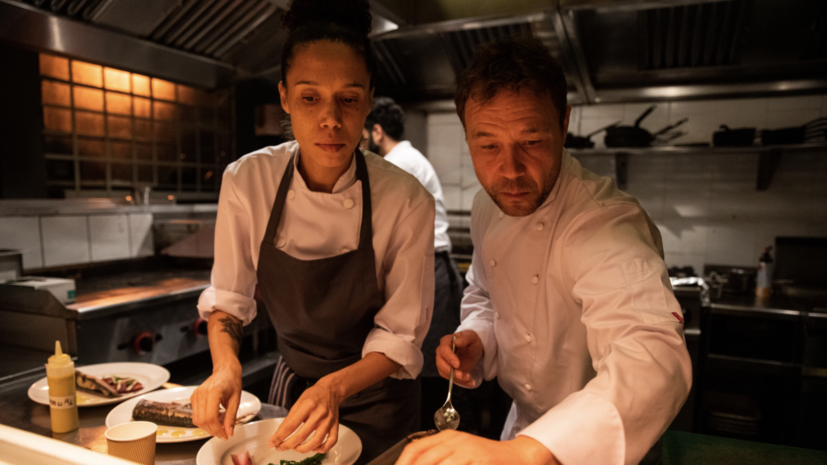 A large-scale historical film "Amanat" from directors Anton Sievers and Rauf Kubaev is coming out on Russian screens.

The plot focuses on the real dramatic love story of Liza Olenina and the son of Imam Shamil Jamalutdin, which unfolded in the 19th century.

“Amanat is translated as a pledge, as something of value given for preservation.

Our film is the story of people whose whole life is a guarantee of honor, love, duty and following the path they have chosen,” explains Shamil Jafarov, general producer and author of the idea.

Many people know Jamalutdin as a "great hostage", and the film will help to understand whether he was a hostage of politics or still great love.

In life, Lisa (Varvara Komarova) and Jamalutdin (Amin Khuratov) may not have been so passionately in love, but in the film the viewer will see all-consuming feelings.

This military historical story about love, betrayal, pain, honor and loyalty unfolds against the backdrop of the sunset of the Nikolaev era.

"My dad is the leader"

In the center of the plot of Yegor Konchalovsky's family comedy is sea captain Petrov, played by Dmitry Nagiyev.

Ten years ago, he sailed away and did not return, and his relatives considered him missing.

Physically, Petrov is really strong and vigorous, but he has problems with memory, and instead of a loving father and spouse, his wife and son meet an African leader.

Long years of living on the island after the shipwreck did not pass without a trace - now the sailor runs around the city with a spear, eats with his hands and does not accept any rules of civilization.

The hero will have to find a balance in city life and improve relations with his family.

"Manyunya in the Cinema" is a kind family film about true friendship, love, a happy childhood - and all this against the background of the nostalgic atmosphere of the USSR.

The action takes place in Armenia in 1979.

The main character Manyunya (Ekaterina Temnova) finds her best friend in the person of her classmate Narine (Karina Kagramanyan).

Together they get to know this world, fall in love for the first time, enjoy the wonderful weather and their youth.

According to Narine Abgaryan, the author of the book "Manyunya", her work was inspired by Astrid Lindgren's work "Emil from Lönneberga".

In 2021, the series Manyunya was released on the Okko video service.

The protagonist is talented chef Andy Johnson, who is on the verge of a nervous breakdown on the busiest evening of the year.

Inspectors come to the institution, a critic comes, and, on top of everything else, investors demand a refund.

The plot was based on the short film of the same name, released earlier and nominated for the BIFA award.

Inspired by the result of his work, Barantini made the bold decision to film Boiling Point, like the short, entirely in one take, using the camera as a frightened bystander in a restaurant.

“Shooting an entire film in one take has never been done before, but we knew from the experience of working on a short film that it was possible to some extent.

One of the main points was to find a suitable location for filming.

As a result, we chose the restaurant where I worked as a chef.

I knew its layout like the back of my hand.

It is completely open there, very different from the one in the short, but we were able to write the script based on the characteristics of that place, ”Phil Barantini told Variety.

An ambitious young girl named Amy dreamed of a luxurious life all her life.

After working in an elite escort, she is offered to collect girls who are ready to go to the Arab sheikhs.

However, not every girl will be able to get into Amy's list, because there are strict selection criteria: only models, participants in beauty contests or movie stars.

All chosen ones are guaranteed a great vacation, expensive gifts, fabulous conditions and, of course, complete anonymity.

But soon this "ideal world" will show its pitfalls.

In her film, director Maria Sadowska shows the viewer how the sex business tempted young women in Poland.

"Saints don't belong here" (There Are No Saints)

"No Country for Saints" is a story about a hired killer nicknamed the Jesuit.

After being released from prison, he observes a sad picture: his wife was killed, and his son was kidnapped.

The hero, whose role in the film was played by Jose Maria Yaspik, has nothing to lose: he intends to find his child and take revenge on the people who killed his wife.

The film will be released on Russian screens on May 27.