Under the title "Signals", Emirati artist Camelia Mohebi presents her color experience in which artistic styles intersect between abstraction, portraiture and collage, to enter the recipient into a world of human feelings born in a state of complete isolation from all media frequencies. 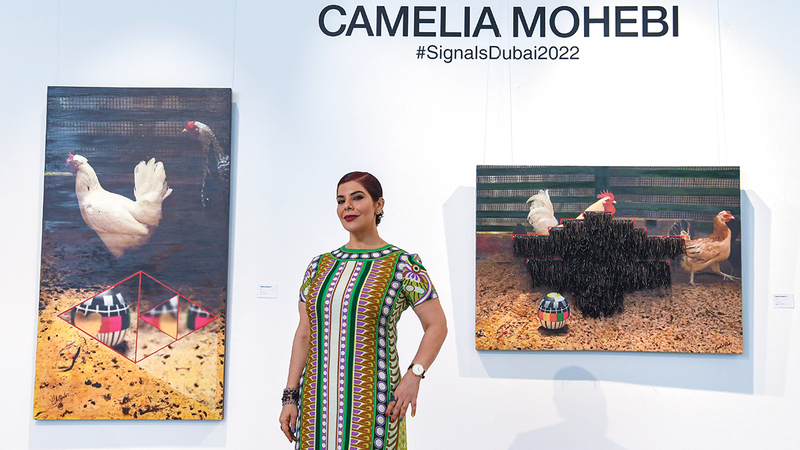 Under the title "Signals", Emirati artist Camelia Mohebi presents her color experience in which artistic styles intersect between abstraction, portraiture and collage, to enter the recipient into a world of human feelings born in a state of complete isolation from all media frequencies.

Camellia's works in her exhibition, which is organized at Sotheby's headquarters, in the Dubai International Financial Center, carry some personal or even inspired experiences, which she summarizes through facial features sometimes, and abstraction at other times, to focus on reformulating all the frequencies that we do not listen to in our daily lives. And that through multimedia, such as cloth, threads, wood, and others.

She also presents personal experiences in her paintings, as she presented a work expressing her fight against obesity and her attempt to change weight, and another in which she painted her father a week after his death, as she painted his face, threw a cup of coffee on the canvas, and formed the coffee as a heart next to her father's face, which surrounded him with poetic writings, noting that Her study of art therapy is what led her to dedicate a large space for expression through creativity. Painting is an opportunity to express feelings in an artistic way, and negative feelings are often brought out before positive ones.

On how and the stages of art therapy, Camelia explained to "Emirates Today": "Starting with art therapy is through expression in the first place, and then work begins to create new recipients in the brain, and to change the features of drawing work positively above all that has been emptied from Negatives, so that the work takes a positive form, urging hope and seeing the issue from a new angle.”

Camelia believes that we as human beings are enveloped in the frequencies created by the tools of man and nature, but the effects may be hidden or unknown, so this exhibition is the result of her exploration journey to identify all these influences, and try to translate them visually.

Camelia said about her exhibition: “I started drawing and designing since I was young, because I was suffering from slow learning, and for this reason drawing was my world through which I cross, and my works are often inspired by people and faces. I received my studies in many countries, so human experiences are very inspiring.” For me, this reflected on my artistic identity, so that it became very diverse.”

Camelia worked on the study of subliminal messages, and this study was directly reflected in her work, so she presented in the exhibition the concept of “absence of hesitation” through works on which the colors that covered the television screens after the broadcast ended at midnight, pointing out that the concept of absence of frequency is present in Life comes in a variety of forms. People suffer from a lack of hesitation with the things they love to do. Rather, they follow what they have been taught since childhood, and what is automatically put into daily life.

Camelia has been affected by a number of experiences, as she believes that the creator often crystallizes his experience through different artistic experiences, noting that the various influences appear in her painting in one way or another undoubtedly, and she also uses a lot of media in the artwork, because she always finds exciting tools to work, Whether threads or crochet, and others.

And she added, "As a designer I always put a lot of media, and my study of sounds makes me constantly add media. Color alone is not considered a sufficient medium for me to express, and relying on one material makes me bored."

The artist Camelia Mohebi was born in 1978, and she studied in Dubai, Geneva and London, and obtained a BA in Visual Communication.

She also obtained a range of certificates in programming, linguistics and art therapy.

Drawing inspiration from people, the senses, and the subconscious and emotional mind, she began to express herself through art, and by drawing people and faces.

• “I started drawing and designing since I was young, because I was slow to learn, so drawing was universal.”

“Painting is an opportunity to express feelings in an artistic way, and negative feelings are often brought out before positive ones.”